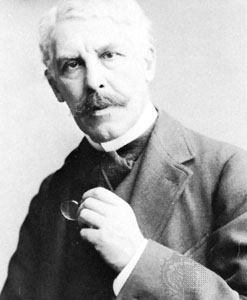 Bancroft was born in , London.

His first appearance on the stage was in 1861 at , and he played in the provinces with success for several years. His first appearance was in 1865 in J. P. Wooler's "A Winning Hazard" at the Prince of Wales's Theatre off . This theatre was managed by Effie Marie Wilton (b. 1840), whom he married in 1868. The pair continued as joint managers of the theatre.

Mr. and Mrs. Bancroft produced and starred in all the comedies beginning in 1865: "Society" (1865), "Ours" (1866), "Caste" (1867), "Play" (1868), "School" (1869) and "M.P." (1870), and, after Robertson's death, in revivals of the old comedies, for which they surrounded themselves with an admirable company. Together, Robertson and the Bancrofts are considered to have instigated a new form of drama known as 'drawing-room comedy' or 'cup and saucer drama'. The Bancrofts gave Robertson an unprecedented amount of directorial control over the plays, which was a key step to institutionalizing the power that directors wield in the theatre today. [ [http://faculty.winthrop.edu/vorderbruegg/winthropweb/vitaindex/gilbert.html Vorder Bruegge, Andrew "W. S. Gilbert: Antiquarian Authenticity and Artistic Autocracy" (Associate Professor, Department Chair, Department of Theatre and Dance, Winthrop University). Professor Vorder Bruegge presented this paper at the Victorian Interdisciplinary Studies Association of the Western United States annual conference in October 2002] , accessed March 26, 2008]

The Bancroft management at the Prince of Wales's Theatre constituted a new era in the development of the English stage and had the effect of reviving the London interest in modern drama. They were also responsible for making fashionable the 'box set', which had first used at the in the 1830s – this consisted of rooms on stage which were dressed with sofas, curtains, chairs, and carpets on the stage floor. They also provided their actors with salaries and wardrobes. Also, the Bancrofts redesigned their theatre to suit the increasingly upscale audience: "The cheap benches near the stage, where the rowdiest elements of the audience used to sit were replaced by comfortable padded seats, carpets were laid in the aisles, and the pit was renamed the stalls." [ [http://www.peopleplayuk.org.uk/guided_tours/drama_tour/19th_century/cup.php Information about Cup and Saucer realism] (PeoplePlay UK)]

In 1879, the Bancrofts moved to the , where they produced or starred in a revival of "Money", and in Sardou's "Odette" (for which they engaged Madame ) and "Fedora", and Pinero’s "Lords and Commons", with revivals of previous successes.

The Bancrofts collaborated in the production of two volumes of reminiscences called "Mr. and Mrs. Bancroft On and Off the Stage, Written by Themselves" (London, 1888) and "The Bancrofts: Recollections of Sixty Years" (Dutton and Co.: London, 1909).

*"The Bancrofts: Recollections of Sixty Years" (Dutton and Co.: London, 1909)
* [http://www.peopleplayuk.org.uk/guided_tours/drama_tour/19th_century/cup.php Information about the Bancroft's and "cup and saucer drama" from the People Play website]
* [http://www.britannica.com/eb/topic-51376/Sir-Squire-Bancroft Brittanica article]