Paik is credited with an early usage (1974) of the term "super highway" in application to telecommunications.

Born in Seoul during the colonial period of Korea, the youngest of five siblings, Paik had 2 older brothers and 2 older sisters. His father owned a major textile manufacturing firm. As he was growing up, he was trained as a classical pianist. In 1950, Paik and his family had to flee from their home in Korea, during the Korean War. His family first fled to Hong Kong, but later moved to Japan. Six years later he graduated from the University of Tokyo where he wrote a thesis on the composer Arnold Schoenberg.

Paik then moved to Germany to study music history at Munich University. While studying in Germany, Paik met the composers Karlheinz Stockhausen and John Cage and the conceptual artists Joseph Beuys and Wolf Vostell who inspired him to work in the field of electronic art.[2] 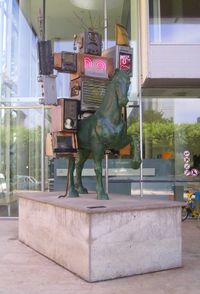 Pre-Bell-Man, statue in front of the 'Museum für Kommunikation', Frankfurt am Main, Germany

Nam June Paik then began participating in the Neo-Dada art movement, known as Fluxus, which was inspired by the composer John Cage and his use of everyday sounds and noises in his music. He made his big debut at an exhibition known as Exposition of Music-Electronic Television, in which he scattered televisions everywhere and used magnets to alter or distort their images.

In 1964, Paik moved to New York, and began working with classical cellist Charlotte Moorman, to combine his video, music, and performance. In the work TV Cello, the pair stacked televisions on top one another, so that they formed the shape of an actual cello. When Moorman drew her bow across the "cello," images of her and other cellists playing appeared on the screens.

In 1965, Sony introduced the Portapak (though it is said that Paik had a similar one before Sony released theirs). With this, Paik could both move and record things, for it was the first portable video and audio recorder. From there, Paik became an international celebrity, known for his creative and entertaining works.[3]

In a notorious 1967 incident, Moorman was arrested for going topless while performing in Paik’s Opera Sextronique. Two years later, in 1969, they performed TV Bra for Living Sculpture, in which Moorman wore a bra with small TV screens over her breasts.[4] Throughout this period it was his goal to bring music up to speed with art and literature, and make sex an acceptable theme. One of his Fluxus pieces instructs the performer to climb up inside the vagina of a living sperm whale.[5]

In 1971, he made a cello out of three television sets stacked up on top of each other and some cello strings. He got a famous cellist to play the "cello" as well.[6]

In 1974 Nam June Paik used the term "super highway" in application to telecommunications, which gave rise to the opinion that he may have been the author of the phrase "Information Superhighway".[7] In fact, in his 1974 proposal "Media Planning for the Postindustrial Society – The 21st Century is now only 26 years away" to Rockefeller Foundation he used a slightly different phrase, "electronic super highway":[8]

"The building of new electronic super highways will become an even huger enterprise. Assuming we connect New York with Los Angeles by means of an electronic telecommunication network that operates in strong transmission ranges, as well as with continental satellites, wave guides, bundled coaxial cable, and later also via laser beam fiber optics: the expenditure would be about the same as for a Moon landing, except that the benefits in term of by-products would be greater."

Many of Paik's early works and writings are collected in a volume edited by Judson Rosebush titled Nam June Paik: Videa 'n' Videology 1959–1973, published by the Everson Museum of Art, Syracuse, New York, in 1974.

In another work, Something Pacific (1986), a statue of a sitting Buddha faces its image on a closed circuit television. (The piece is part of the Stuart Collection of public art at the University of California, San Diego.) Another piece, Positive Egg, displays a white egg on a black background. In a series of video monitors, increasing in size, the image on the screen becomes larger and larger, until the egg itself becomes an abstract, unrecognizable shape. In Video Fish,[9] from 1975, a series of aquariums arranged in a horizontal line contain live fish swimming in front of an equal number of monitors which show video images of other fish.

Paik’s 1995 piece Electronic Superhighway: Continental U.S., Alaska, Hawaii, on permanent display at the Lincoln Gallery of the Smithsonian American Art Museum, is a stunning example of his cultural criticism. With this piece, Paik offers up his commentary about an American culture obsessed with television, the moving image, and bright shiny things. 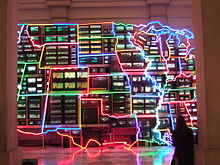 Paik was known for making robots out of television sets. These were constructed using pieces of wire and metal, but later Paik used parts from radio and television sets. A retrospective of Paik's work was held at the Whitney Museum of American Art in the spring of 1982. During the New Year's Day celebration on January 1, 1984, he aired Good Morning, Mr. Orwell, a live link between WNET New York, Centre Pompidou Paris, and South Korea. With the participation of John Cage, Salvador Dalí, Laurie Anderson, Joseph Beuys, Merce Cunningham, Allen Ginsberg and Peter Orlovsky, George Plimpton, and other artists, Paik showed that George Orwell's Big Brother hadn't arrived. In 1986, Paik created the work Bye Bye Kipling, a tape that mixed live events from Seoul, South Korea; Tokyo, Japan; and New York, USA. Two years later, in 1988 he further showed his love for his home with a piece called The more the better, a giant tower made entirely of 1003 monitors for the Olympic Games being held at Seoul.

From 1979 to 1996 Paik was professor at the Kunstakademie Düsseldorf.

A final retrospective of his work was held in 2000 at the Guggenheim Museum in New York, integrating the unique space of the museum into the exhibition itself.[10] This coincided with a downtown gallery showing of video artworks by his wife Shigeko Kubota, mainly dealing with his recovery from a stroke he had in 1996. 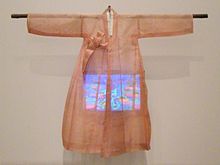 Ommah (2005) in the collection of the National Gallery of Art