The Moon and Serpent Bumper Book of Magic

The Moon and Serpent Bumper Book of Magic

Supercbbox| title = The Moon and Serpent Bumper Book of Magic 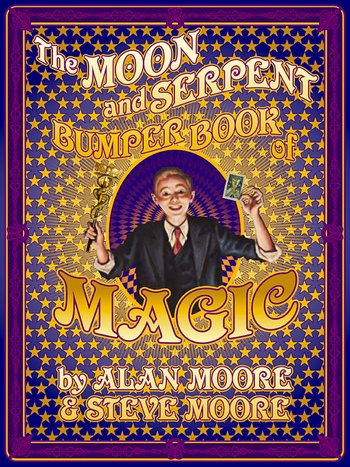 The Moon and Serpent Bumper Book of Magic is an upcoming hardcover work by acclaimed scribe and practicing magician and comics writer and Fortean Steve Moore (no relation) on the history of magic and magicians. It is due for release from in 2010.

The book is intended to be "a clear and practical of the sciences," containing "profusely illustrated instructional essays upon the Moon & Serpent Grand Egyptian Theatre of Marvels sect's theories of magic" from c. 150AD to the present, of whom Alan Moore is a somewhat dedicated follower.

Confirmed illustrators include a number of (Alan) Moore's frequent collaborators, namely , , and , with more to be confirmed.

Among the essays the book will include is "Adventures in Thinking," a detailing "how entry into the world of magic may be readily achieved." The tone of the tome will also include "a number of "Rainy Day" activity pages" suggesting "lively and entertaining things-to-do once the magical state has been attained, including such popular pastimes as divination, etheric travel and the conjuring of a colourful multitude of sprits, deities, dead people and infernal entities from the pit." This will likely incorporate a "bestiary of demons and gods and other things that you might be lucky or unfortunate enough to bump into."

The two Moores - unrelated, but long-term friends - will also pen "lengthy theses revealing the ultimate meaning of both the Moon and the Serpent."

The book will present a "history of magic from the last ice-age to the present day, told in a series of easy-to-absorb pictorial biographies of fifty great enchanters," an area in which both Moores are readily familiar, Alan having been a practicing magician for a number of years, and Steve having contributed to the "" journal since it's earliest days, the , and itself being extremely familiar areas covered by that publication. This section, tentatively entitled "Old Moore's Lives of the Great Enchanters" is desribed by A. Moore as around "fifty-two full pages.. laid out a bit like the old , where you've got five panels with captions" described the illustrations.

Other notable individuals will include "the Persian Magi and Zarathustra" ("after the ic period... the first record of actual magic") and various other real, fictional and debatable individuals including ", , ... [and] ... the first white magician." Coverage will also be given to those individuals who "almost certainly existed, like and people like that." Kevin O'Neill (co-creator with A. Moore of "") is set to illustrate a "seven or eight-page life of Alexander... done in a style... detail [ling] the life of who was the creator of Glycon," Alan's "patron deity."

In addition to the hefty - a projected 320 pages - book itself, a "full range of entertainments will be provided" in addition, including (in typical Moorean fashion - see his 2007 "" for a similar cornucopia of bonus materials) "a lavishly decorated decadent pulp tale of occult adventure recounted in the serial form", "a full set of this sinister and deathless cult's never-before-seen " (illustrated by ), "a fold-out Kabalistic board game" and "a pop-up Theatre of Marvels that serves as both a Renaissance memory theatre and a handy portable shrine." This latter (theatre) is being designed by Moore's wife, the artist .

In additional to Steve Moore's lengthy association with 's UK publication "Fortean Times", Alan Moore is no stranger to the world of magic. A self-proclaimed practicising magician (and self-professed worshipper of Roman god [ [http://www.imdb.com/name/nm0600872/bio "Alan Moore (III) - Biography on IMDB"] Accessed July 19, 2008] ), Moore's ouvre includes several diversions into the realms of the magickal, including his masterpiece "", both a general meditation on magic in comics form and a specific guide to the the 22 cards (issue #12), the h (issue #14) and the entire (issues #13-25). "Promethea" featured appearances from such individuals as Dr. John Dee, , and , all of whom are likely to be covered in the "Bumper Book of Magic".

Indeed, it has been suggested that much of A. Moore's recent output has to a greater or lesser extent been designed as magical rituals: