Vinkovci (pronounced [v̞îːnkɔːv̞t͡si]) is a city in Croatia, in the Vukovar-Syrmia County. In the 2011 census, the total population of the city was 35,375,[2] making it the largest town of the county. Surrounded by many large villages, it is a local transport hub, particularly because of its railways.

The site of Vinkovci (German: Winkowitz, Hungarian: Vinkovce, Latin: Colonia Aurelia Cibalae) was inhabited well before the Roman period The area of the town has been inhabited continually from the Neolithic period. Under the Romans the town was known as Colonia Aurelia Cibalae and was the birthplace of Roman emperors Valentinian I and Valens. The Roman thermal bath is still preserved underground as are several other Roman buildings located near the center of today's Vinkovci.[3]

It was part of Ottoman Empire between 1526 and 1687 and was managed in Sirem sanjak (Its center was Dimitrofça) in Budin Eyalet. It was captured by Habsburg Empire in 1687 and was left to her according to Treaty of Karlowitz in 1699. Habsburg rule lasted until 1918.

From 1941 to 1945, Vinkovci was part of the Independent State of Croatia. From April 17, 1944 the city was heavily bombed by the Allies due to its important position in transportation.[4]

The city and its surroundings were gravely impacted by the Croatian War of Independence. The city was close to the front lines between the Republic of Croatia and the rebel Serbs, but it managed to avoid the fate of Vukovar (in the infamous Battle of Vukovar). The eastern sections of the town were substantially damaged by shelling, and the nearby village of Cerić was almost completely destroyed. The most significant destruction in the center of the city were the city library, which burned down to the ground, the law courts, the Catholic and Orthodox churches, both hospitals, the theatre, two cinemas and a host of businesses and factories.

In December 1995-1996, the Vinkovci rail station served as a rail offloading base for the United States Army's 1st Armored Division in route to Županja to cross the Sava River into Bosnia during Operation Joint Endeavor.

The Croatian Ground Army has stationed the headquarters of its Armored-Mechanized Guard Brigade in the Vinkovci barracks "Bosut". The current brigade was formed in 2007 and it incorporates two former guards brigades (3rd and 5th) as well as several other units formed during the war of independence.

Vinkovci is situated in the eastern part of Slavonia region, 19 km (12 mi) southwest of Vukovar, 24 km (15 mi) north of Županja and 43 km (27 mi) south of Osijek. The city lies in a flatland on the Bosut river, at an elevation of approx. 90 metres (300 ft), and has a mild continental climate. Vinkovci is also part of the subregion of Syrmia.

Vinkovci municipality of its county.

It is connected to all main railroad routes in the region, while the state roads D46 and D55 connect it to the motorways; river Bosut is not a waterway. The nearby villages and adjacent municipalities include Ivankovo, Jarmina, Markušica, Nuštar, Privlaka and Stari Jankovci. 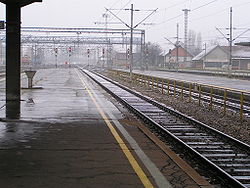 The Vinkovci railway station extends throughout the northwestern part of the city. The passenger terminal where this picture was taken has three platforms. 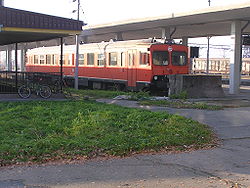 A local train that departs from Vinkovci, situated on a side track. 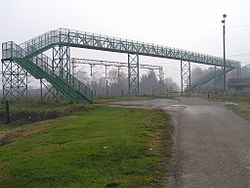 The railway station has separate passenger and cargo sections, both with over a dozen railway tracks, so a pedestrian bridge was built between the two to allow for foot traffic towards the northern outskirts. 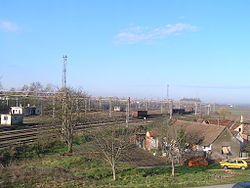 The cargo railway station is located to the northeast of the city.

Its economy is primarily based on trade, transport and food and metal processing. Industries include foodstuff, building material, wood and timber, metal-processing, leather and textile. Due to the surrounding farmland, also notable are farming and livestock breeding, and the town hosts a Crop Improvement Centre.

Vinkovci is the main railway junction of eastern Croatia, of railroads leading from Bosnia and Herzegovina toward Hungary and from the capital Zagreb toward Belgrade. The large railway junction, after Zagreb the second largest in Croatia, underlies the importance of transit in Vinkovci. Vinkovci is also the meeting point of the Posavina and Podravina roads and the intersection of the main road D55 Županja–Vinkovci–Vukovar and several regional roads.

The town features extremely rich cultural and historical heritage, the most interesting attraction being the pre-Romanesque church on Meraja from 1100, with the coats of arms of the kings Koloman and Ladislas, as one of the most important medieval cultural monuments in Croatia. Unfortunately, this monument has recently had the ancient timber beams removed and a new, modern, brick upper section and roof added, totally destroying its appearance. Luckily the building is hidden in summer by mature trees.

The most famous annual event, one of the biggest in Slavonia, is the folk music festival "Vinkovci Autumns" (Vinkovačke Jeseni), which includes the folklore show and the presentation of folk customs of Slavonia. It is characterized by a number of original folk music performances, beautiful traditional costumes, a beauty contest, competitions of the manufacturers of kulen (smoked paprika-flavoured sausage), plum brandy and other traditional foodstuffs, and especially by the magnificent closing parade.

Vinkovci's music school Josip Runjanin is named after the composer of the Croatian national anthem Lijepa nasa domovino. The Vinkovci gymnasium is named after Matija Antun Reljković, a Slavonian writer who lived in the city in the 18th century.

Vinkovci is twinned with: