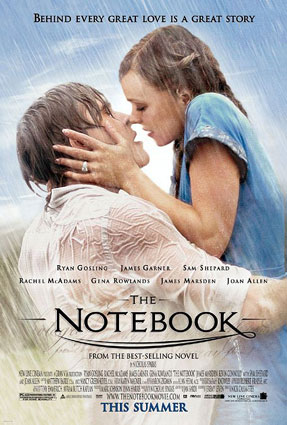 "The Notebook" is a 2004 directed by , based on the novel of the same name by Nicholas Sparks. The film stars and as an elderly couple; Garner reveals the story of when they fell in love during the early 1940s. The younger versions of their characters are played by and .

In a modern day nursing home, an elderly man named Duke begins to read a love story from his notebook to a female fellow patient he has befriended.

The story begins in 1940. At a carnival in , local country boy Noah Calhoun () sees seventeen-year-old heiress Allie Hamilton () for the first time and is immediately smitten. She continuously refuses his persistent advances until their well-meaning friends lure them together; they then get to know each other on a midnight walk through empty Seabrook.

Noah and Allie spend an idyllic summer together. One night, a week before Allie is to leave town, she and Noah go up to an abandoned house called The Windsor Plantation. Noah tells her that he hopes to buy the house, and Allie makes him promise that the house will be white, with blue shutters, a walkaround porch, and a room that overlooks the creek so she can paint. They intend to make love for the first time, but are interrupted by Noah's friend Fin () with the news that Allie's parents have the police out looking for her. When Allie returns home, her disapproving parents ban her from seeing Noah again. Allie fights with Noah outside and the two decide to break up. Allie immediately regrets the decision but Noah drives away. The next morning, Allie's mother reveals that they are going home that morning. Allie frantically tries to find Noah, but is forced to leave without saying good-bye. The Hamiltons then send Allie to , where she begins attending . Noah, devastated by his separation from Allie, writes her one letter a day for a year, only to get no reply as Allie's mother keeps the letters from her. Noah and Allie have no choice but to move on with their lives. Allie continues to attend school, while Noah and Fin enlist to fight in . Fin is killed in battle.

Allie becomes a nurse for wounded soldiers. There, she meets the wealthy Lon Hammond, Jr (), a well-connected young lawyer who is handsome, sophisticated, charming and comes from old Southern money. The two eventually become engaged, to the joy of Allie's parents, although Allie sees Noah's face when Lon asks her to marry him.

When Noah returns home, he discovers his father has sold their home so that Noah can go ahead and buy The Windsor Plantation. While visiting Charleston to file some paper work, Noah witnesses Allie and Lon kissing at a restaurant, causing Noah to go a little crazy, convincing himself that if he fixes up the house, Allie will come back to him.

In the present, it is made clear that the elderly woman is Allie &mdash; suffering from , which has stolen her memories &mdash; and Duke is her husband. Allie does not recognize their grown children and grandchildren, who beg Duke to come home with them. He insists on staying with Allie.

While trying on her wedding dress in the 1940s, Allie is startled to read about Noah completing the house in the style section of a Raleigh newspaper and faints. She visits Noah in Seabrook and he invites her to dinner, during which Allie tells Noah about her engagement. Noah questions whether Allie's future husband is a good man and she reassures Noah that he is. Later in the evening, Noah invites Allie to come back tomorrow. The next morning, Allie and Noah go rowing on a nearby lake and begin to reminisce about their summer together. As a rain storm starts Noah rows to shore, where Allie demands to know why Noah never wrote to her. After the revelation that Noah had indeed written to Allie, they share a passionate kiss, before making love into the night.

The next day, Allie’s mother appears on Noah’s doorstep, telling Allie that Lon has followed her to Seabrook after Allie's father told him Noah. Her mother takes Allie out for a drive to show her that there had been a time in her life when she could relate to Allie’s present situation. On returning to Noah's, she hands her daughter the bundle of 365 letters that Noah had written to her. When alone, Noah asks Allie what she is going to do; Allie is confused and confesses that she doesn’t know. Noah asks her to just stay with him, admitting it is going to be really hard, but he is willing to go through anything because he wants to be with her. Confused as ever, Allie drives off.

Allie drives to the hotel and confesses to Lon, who is angry but admits that he still loves her. He tells her that he does not want to convince his fiancée that she should be with him, but Allie tells him he does not have to, because she already knows she "should" be with him.

The film goes back to the elderly couple, and Allie asks Duke who Allie chose. She soon realizes the answer herself; young Allie appears at Noah's doorstep, having left Lon at the hotel and chosen Noah. They embrace in reunion.

Elderly Allie suddenly remembers her past before she and Noah/Duke joyfully spend a brief intimate moment together; after originally finding out about her illness, she had herself written their story in the notebook with the instructions for Noah to "Read this to me, and I'll come back to you." But soon Allie relapses, losing her memories of Noah yet again. She panics, and has to be sedated by the attending physician. This proves to be too difficult for Noah to watch and he breaks down. The next morning, Noah is found unconscious in bed and he is rushed to the hospital; he later returns to the nursing home's intensive care ward. He goes to Allie's room later that night, and Allie remembers again. The next morning a nurse finds them in bed together, having both died peacefully holding each other's hand. The last scene shows a flock of birds flying away.

The film received mixed reviews from critics. The review aggregate at reported that 51% of critics gave the film positive reviews, based on 142 reviews. [cite web|url=http://www.rottentomatoes.com/m/notebook/ |title="The Notebook" - Movie Reviews, Trailers, Pictures - Rotten Tomatoes |accessdate=2008-02-05 |publisher=] reported the film had an average score of 53 out of 100, based on 34 reviews. [cite web|url=http://www.metacritic.com/film/titles/notebook |title="The Notebook" (2004): Reviews |accessdate=2008-02-05 |publisher=]

The film was far more popular with women than with men. On the [http://www.imdb.com/chart/female Women's Top 50 Films] it is #27, but men only scored it 7.4/10, far off the equivalent list.

On September 2008, did a poll and the movie was ranked the No. 1 as the most romantic movie between 35 different movies, voted by Yahoo users.

The UK television premiere of the film was Sunday 21 September 2008 on . It was watched by 1 million viewers, a 5% share between 9pm and 11.25pm. An additional 70,000 viewers watched on catch-up service Channel 4+1 an hour later. [http://www.guardian.co.uk/media/2008/sep/22/tvratings.television3?gusrc=rss&feed=global]