:"For the creature of lore, see . For other meanings, see ."Infobox musical artist |
Name = The Zombies 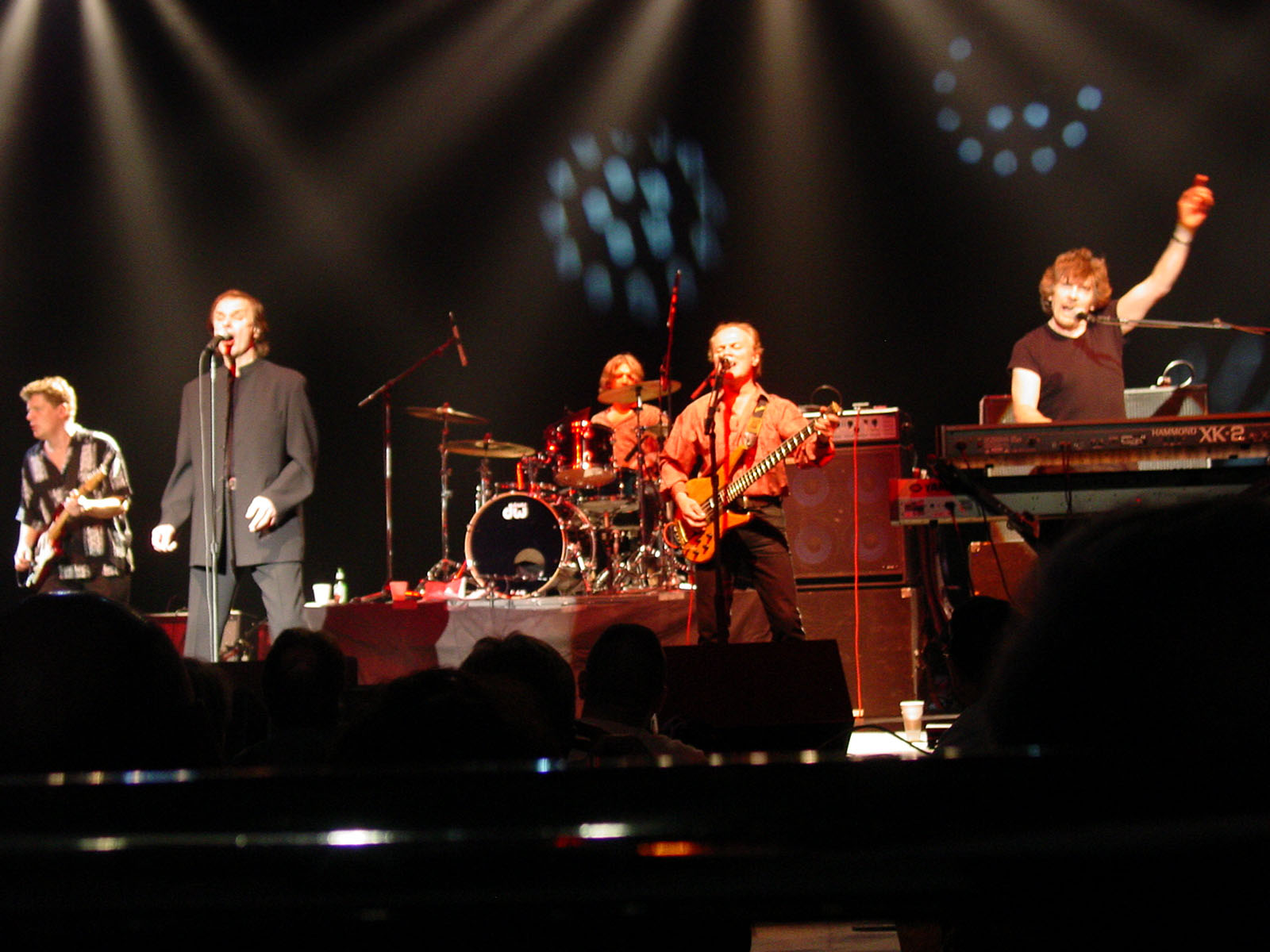 The group formed in 1961 in , , and gained their initial reputation playing the Old Verulamians Rugby Club in that city. The group was formed whilst the members were at school. Some sources state that Argent, Atkinson and Grundy were at St Albans School, while Blunstone and White were students at St Albans Boys' Grammar School (since renamed ). [ [http://www.hendontimes.co.uk/archive/display.var.434582.0.zombies_heyday_recalled.php Zombies' heyday recalled] - The Hendon Times] [ [http://www.classicbands.com/zombies.html Classic Bands - The Zombies] ] Other sources claim they were all at St Albans Boys' Grammar School; [ [http://www.45-rpm.org.uk/dirz/zombies.htm The Zombies ] ] however, this is not correct. After winning a beat-group competition sponsored by the "London Evening News", the Zombies signed to Decca and recorded their first hit, "" (Argent's second , written specifically for this session), which was released in mid-1964 and peaked at number 12 in the UK, where it was their only UK hit. This minor-key, -tinged number, distinguished by its musicianship and Blunstone's breathy vocal, was unlike anything previously heard in British rock and would become a "bona fide" classic. It was first aired in the in early August 1964 on rock station WINS by Stan Z. Burns, who debuted the song on his daily noontime "Hot Spot" segment during which new songs were played. The tune began to catch on in early fall and eventually climbed to #2.

Like many other groups, the Zombies were sent to the United States to tour behind their new hit single. One of their most memorable early U.S. gigs were 's Christmas shows at the Fox Theatre, where the band played seven performances a day. Hugh Grundy later recalled also contributing to the sets by &mdash; not as a musician, but by revving a motorcycle brought backstage as a sound effect for their performance of "".

In early 1965, Rod Argent's "Tell Her No" became another big seller in the United States (where a by American pop vocalist was a hit in 1983), but failed to make the Top 40 in the band's native UK. Although subsequent recordings such as "I Love You" (which became a hit for in 1968), "Indication", "Whenever You're Ready", and "Is This the Dream" were of uniformly high quality, none achieved the success of the previous two singles.

Their first LP, "" (1965), was a collection of early singles, featuring half a dozen original songs combined with several covers. In 1967, the Zombies signed to , for whom they recorded the album "". (The word "odyssey" was misspelled by cover designers.) Because the band's budget could not cover session musicians, they used a , a device designed to imitate orchestral sections.

By the time "Odessey and Oracle" was released in April 1968, the group had disbanded. The album sold poorly, and was only given a U.S. release because , then signed to Columbia Records, convinced his label of the album's artistic merits. An album track, "", written by Argent, was released as a single and eventually (1969) became a nationwide hit (Billboard #3) after a radio put it in heavy rotation. The band's original lineup declined to regroup for concerts, so various concocted groups tried to capitalize on the success and falsely toured under the band's name. Another such group toured in 1988, going so far as to the group's name (since the band had let the mark lapse) and recruit a member named Ronald Hugh Grundy, who was passed off as being an original member, although he played bass rather than drums. [ [http://www.enotes.com/contemporary-musicians/zombies-biography "Jim Powers, The Zombies Biography"] , enotes.com]

After The Zombies disbanded, Rod Argent formed a band called Argent, with Chris White as a non-performing songwriter. Colin Blunstone eventually launched a solo career after brief careers outside the music biz, including one stint in the burglary claims section of an insurance company. Both Argent and White continued to provide him with new songs.

In 1991 Blunstone, Grundy and White briefly reunited as The Zombies with guitarist and recorded the album "New World".

On 25 November, 1997, all five Zombies reunited at the in London's as part of a solo show by Blunstone, to perform "She's Not There" and "Time of the Season".

Blunstone and Argent reunited for an album and tour together in 2001 under the Blunstone & Argent monicker and continued playing live shows together into 2004 when they began going out under The Zombies name again. The new line-up included Rod's cousin (formerly of and ), his son on drums, and (brother of ) on guitar.

ist Paul Atkinson died in , on , . Having retired as a performer, he was an man for many years.

In 2005 Colin Blunstone and Rod Argent of The Zombies released a DVD and 2-CD album ("Live At The Bloomsbury Theatre"), which received excellent reviews in the "Times", "Mojo", "The Sun", and other publications.

In 2006 Rod Argent and Colin Blunstone carried on touring as The Zombies.

Their U.S. tour of 2007 garnered stellar reviews. "The Zombies, still led by original keyboard wizard Rod Argent and featuring the smoked-silk vocals of Colin Blunstone, is the finest British-invasion-era band still touring that doesn't have Mick Jagger as a frontman"- "".

To mark the 40th anniversary of "Odessey & Oracle", the four surviving original members of The Zombies participated in a three-night series of concerts at London's Empire Theatre between 7 and 9 March, 2008. For the opening set Blunstone and Argent, with their current touring group, played a selection of other Zombies songs, two Argent songs, and some of Blunstone's solo material, for which a string quintet joined them on stage. For the second set, introduced by , The Zombies, with Keith Airey handling the guitar parts of the late Paul Atkinson, played the album in its entirety, and to reproduce the many overdubs on the album, they were joined by a horn section, additional vocalists and percussion, including Jim and Steve Rodford and on memotron. They closed the set by performing "Tell Her No" and "She's Not There". [cite web
url= http://www.music-news.com/ShowReview.asp?H=The-Zombies-Shepherds-Bush-Empire,-London-live-review&nReviewID=3077&nType=3
title= The Zombies - Shepherds Bush Empire, London - Music-News.com
accessdate= 2008-03-28
last= Coplin
first= James
date= 2008-03-10] [Citation
last = Petridis
first = Alexis
newspaper = The Guardian
year = 2008
date = 2008-03-10
url = http://music.guardian.co.uk/live/story/0,,2263788,00.html ] [Citation
last = Sinclair
first = David
newspaper = The Times
year = 2008
date = 2008-03-10
url = http://entertainment.timesonline.co.uk/tol/arts_and_entertainment/music/live_reviews/article3516439.ece ] Rod and Colin's respective websites had advertised that the 8 March concert was recorded for a CD and/or DVD release later in 2008, and the CD has been officially posted by Amazon.com to be presold for a release of 1 July, 2008.

The Zombies kicked off a North American tour on 3 July, 2008, with an outdoor festival performance at the Comerica Cityfest in Detroit, Michigan. The group played all the group's hits, five selections from "Odessey & Oracle", and several Argent songs.

The Zombies will be appearing at the 2008 http://www.rhythmfestival.net/index.html

Use of the "Begin Here" album track "The Way I Feel Inside" in the soundtrack to the 2004 "" has spurred on another generation to seek out and revive their fact|date=August 2008.

A remix of "She's Not There" can be heard in "" as The Bride enters Bill's home.

"Time of the Season" was used by Bulmers/Magners cider in their March 2007 spring television advertisement campaign (http://www.bulmers.ie/the-ads/) in the UK (as Magners) and Republic of Ireland (as Bulmers).

"Time of the Season" was also used in commercials in the late '90s.

"Time of the Season" was featured in the television special "The 60's".

"Time of the Season" has been used in The Simpsons and South Park.

*"I Love You", a hit for the band
* began occasionally performing "" on their 2005 summer tour, and subsequently released a live version on their "" CD and DVD later that year. It continues to be a Dave Matthews Band crowd favoritefact|date=August 2008.
* Both "" and "" were covered on "" by Blake Lewis and Chris Sligh, respectively, on the sixth season British Invasion episode.
* In 's "", the song "About Her" is a remake of "" by .
* Santana recorded a version of "She's Not There" and released it as a single and on their "Moonflower" album in 1977.
* The song "" samples "."
* covered "This Will Be Our Year" it appeared on the "" compilation (2004) and the "" soundtrack (2006).
* has covered multiple Zombies songs live, including "Time of the Season" and "This Will Be Our Year".
* Boston-based indie-pop duo closed out their rare "Live at Howlers" EP with "The Way I Feel Inside". They have also performed an electronic arrangement of "Time of the Season" on occasion.
* The late performed a cover of "Care of Cell 44".
* and covered "Care of Cell 44" on "".
* recorded a cover of the song "Hung up on a Dream", released as the b-side of their single "First Class Riot" in 2007.
* Anthony Green performed "This Will Be Our Year" on his acoustic tour with .
* The Canadian indie-rock trio has been knownwho? to cover "Time of the Season" live.
* Various bands from the Pacific Northwest, including the and , contributed versions of Zombies songs to a 1994 , "The World Of The Zombies". [ [http://lamestainnorthwest.blogspot.com/2007/07/flop-2-degrees-separated-from-cat-butt.html "MC Tom, Flop: 2 Degrees Separated from Cat Butt"] , Lamestain]
* Lois recorded "The Way I Feel Inside" on her "Strumpet" lp
* re-recorded "This Will Be Our Year" on their cover album "".
* covered "Time of the Season" on their Campus Tour in 2008.
* covered "Friends of Mine" on their compilation ""
* The Vancouver indie band covered "Just Out Of Reach" on "", and they regularly perform the song live.