Give Up the Ghost

Give Up the Ghost

Infobox musical artist
Name = Give Up the Ghost 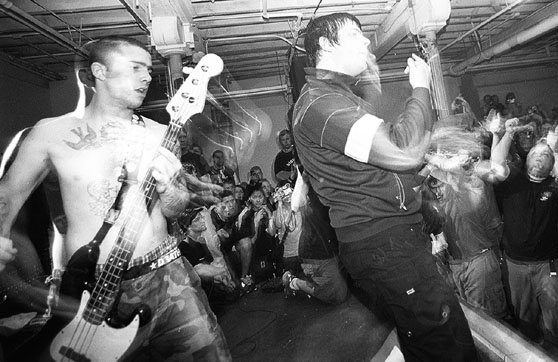 Give Up the Ghost was a short-lived and highly influential band from Boston, Massachusetts.

Give Up the Ghost was formed when Tim Cossar and (who was then a roadie for ) met up with Azy Relph and Jesse Van Diest in 1998. They recorded a demo tape in , followed by their debut release, a self-titled 7", on under their original name American Nightmare in 2000. After extensive touring and line-up changes, the band recorded their second release 7", The Sun Isn't Getting Any Brighter. This was later combined with their self-titled effort to form Year One, which was released posthumously.

Their debut full-length, Background Music, was recorded for in and was released to much acclaim. In , the band faced a legal battle with a similarly named band, a Misfits cover band, from Philadelphia. The band then changed their name briefly to the initials "A.N." then to American Nothing for a brief period. After the other American Nightmare threatened to press charges again, they changed their name to Give Up the Ghost (which was intended to be the name of their second album). [cite web | url = http://www.kerrang.com/nav?page=kerrang.reviews.artist.news&fixture_news=319987&resource=319987&fixture_artist=319986 | title = American Nightmare change their name | accessdate = 2007-04-01 | publisher = kerrang.com | date = 2003-03-17 | language = English ] Their second full length, "We're Down Til We're Underground" released on Equal Vision Records, displayed the band experimenting with their sound, with longer songs that didn't follow the typical hardcore songwriting formula they had adhered to in their previous releases. The band toured the world with bands such as: Every Time I Die, My Chemical Romance and Avail.

The band broke up suddenly in , a day after announcing the cancellation of a an tour. [cite web
title = Give Up The Ghost Cancel UK Dates | url = http://www.rock-sound.net/view_news.php?headline=GIVE-UP-THE-GHOST-CANCEL-UK-DATES&id=2004061601
publisher = Rock Sound magazine| accessdate = 2007-04-04] The band issued a statement which cited "health and personal reasons" for the split. [cite web
title = Give Up The Ghost Give Up The Ghost! | url = http://www.metalhammer.co.uk/news/article/?id=41930
publisher = Metal Hammer| accessdate = 2007-04-04] Give Up the Ghost's success, combined with the success of contemporary Boston bands like , cemented the position of the Boston scene as the bellwether for new trends during the early 2000s. Members went on to join/form other bands such as Some Girls