Club Ferro Carril Oeste, known simply as Ferro Carril Oeste or Ferro, is a sports club from the neighbourhood of Caballito, in Buenos Aires, Argentina. The club was founded on July 28, 1904 by 95 railway workers from the Buenos Aires Western Railway. The club participates in many different sports with professional football, basketball, and volleyball (men's and women's) teams, and had a very prominent role in Argentine sports in the 1980s.

After the foundation, the board and workers of the railway company obtained from the company itself land to build a football stadium and other sports installations. At the end of the 1970s, Ferro had about 45,000 members.

Ferro had its golden age during the 80s', when obtaining two titles. The club also set three notable records in the Argentine Primera:

As a negative record, Ferro has the longest run without scoring a goal. The team went 875 minutes without scoring between the end of the 1998 Apertura and the 1999 Clausura.

The Buenos Aires Clásico del Oeste is played between Ferro and Vélez Sársfield. 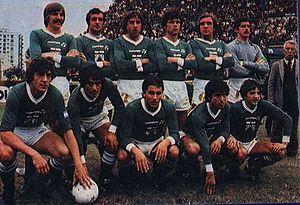 The Ferro Carril Oeste team that won the 1982 Nacional

In the early 1980s, Ferro was one of the best sides outside the NBA, and was managed by León Najnudel, the man who thought up the current league.

Started playing also in 1953 and reaches first division in 1957.