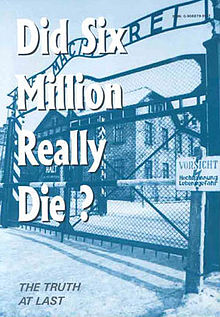 Did Six Million Really Die? is a Holocaust denial booklet written by British National Front member Richard Verrall, under the name Richard E. Harwood, and published by Ernst Zündel in 1974. The Supreme Court of Canada found that the book "misrepresented the work of historians, misquoted witnesses, fabricated evidence, and cited non-existent authorities."[1]

In the book, Verrall claimed that the Holocaust was a fabrication. The booklet targeted various war crime trials, the best-known of these being the Nuremberg Trials and the Adolf Eichmann trial, criticizing their legal integrity and the standards of evidence presented, as well as the impartiality and objectivity of the judges.

Verrall also claimed that censuses and population charts showed that the world's Jewish population did not significantly change between 1938 and 1948, and that the total Jewish population in Nazi-controlled Europe never exceeded 2.5 million. These population estimates given by Verrall are contradicted by authoritative sources [2], including the Nazis' own counts; indeed, according to the Wannsee Protocol, there were eleven million Jews in Europe in 1942.[3]

He further argued that, first, the scale of the Holocaust had been fabricated by the Allies

He proposed that the Holocaust was also used as a tool against the "white race", writing that "thus the accusation of the Six Million is not only used to undermine the principle of nationhood and national pride, but it threatens the survival of the Race itself."

In a 1992 court case in front of the Supreme Court of Canada, the book was examined, and the court concluded that it "misrepresented the work of historians, misquoted witnesses, fabricated evidence, and cited non-existent authorities."

The Supreme Court did find that in the previous lower court trial, the jury were improperly instructed:

The jury was instructed that it was entitled to infer from the judge's instruction that because the Holocaust must be regarded as proven, the accused must have known it to be proven and must be taken to have published his pamphlet deliberately for personal motives, knowing the falsity of his assertion to the contrary. [...] The verdict flowed inevitably from the indisputable fact of the publication of the pamphlet, its contents' divergence from the accepted history of the Holocaust, and the public interest in maintaining racial and religious tolerance.[4]

However, in reviewing the proceedings of the lower court trial, the Supreme Court were convinced that the facts in the pamphlet were indeed false:

[During the previous trial] the appellant's allegations of fact in the pamphlet were divided into 85 extracts and rebutted one by one. The trial judge summarized this material at length for the jury but it will suffice here to point only to some of the more egregious examples. The pamphlet alleged that a memorandum from Joseph Goebbels revealed that the Final Solution was never more than a plan to evacuate Jews to Madagascar. It was shown that there was no such memorandum but that the reference was to Goebbels' diary entry of March 7, 1942. This diary extract was adduced and shown to state nothing of the kind. The Crown went on to point out that the entry for March 27, 1942 made clear that the Final Solution was, in fact, genocide: "Not much will remain of the Jews. On the whole, it can be said that about 60 per cent of them will have to be liquidated, whereas only about 40 per cent can be used for forced labor...."

The pamphlet alleges that no documentary evidence exists of the Nazi plan to exterminate the Jews. The Crown adduced speeches by Heinrich Himmler, head of the SS, made on October 4, 1943 to his troops in Posen in which he refers to the program of extermination of the Jews. Himmler stated: "I also want to talk to you, quite frankly, on a very grave matter. Among ourselves it should be mentioned quite frankly, and yet we will never speak of it publicly. [...] I mean the clearing out of the Jews, the extermination of the Jewish race...."

The appellant argued that the term "exterminate" used in this passage really meant "deport". It was left to the jury to consider whether they accepted that this was a possible interpretation.

The Crown also adduced the December 9, 1942 entry in the diary of Hans Frank, SS officer in charge of Poland, describing the annihilation of 3.5 million Jews in the general government and numerous documents adduced at the Nuremberg trials, including the daily reports of the Einsatzgruppen (action groups) enumerating the death tolls of Jews in the USSR. In a report to Hitler of December 20, 1942, Himmler indicates that the Einsatzgruppen had executed 363,211 Jews between August and November, 1942.

..The pamphlet alleged, purportedly relying on a Red Cross report, that all concentration camps were really humane work camps. Mr. Biedermann, a delegate of the International Committee of the Red Cross, testified that the Red Cross Report pertained exclusively to prisoner of war camps as the Red Cross personnel had not been inside any camps in which civilians were detained. The Crown adduced evidence from Professor Hilberg that while some camps had labour facilities annexed to them, Belzec, Treblinka, Sobibor and Chelmno were exclusively "killing factories" and that gas chambers were in operation at Auschwitz-Birkenau and Majdanek. The numbers of Jews slaughtered was verifiable from railway records showing the payments per person made by the Gestapo for transport to the camps. These numbers were compared with those having left the camps or who were found there after liberation.

On and on, the Crown showed that the appellant misrepresented the work of historians, misquoted witnesses, fabricated evidence, and cited non-existent authorities.[4]

The conflict between the assertions made by the appellant and those made by orthodox Holocaust historians cannot be resolved through reasoned debate. Orthodox historians point to sources which support their theories; the appellant and other "revisionist" historians point to documents which do not exist or which do not say what they claim they do. The pamphlet Did Six Million Really Die? does not fit with received views of reality because it is not part of reality.[4]

Anthony Hancock re-published Did Six Million Really Die? and made a significant amount of money from doing so, to the point where he was sued for royalties in the High Court in 1982.[5]

In 1985 and 1988 Verrall's publisher Ernst Zündel was tried in Canada on charges of "false news." He was found guilty and sentenced to 15 months in prison. On appeal his conviction was overturned by the Canadian Supreme Court's landmark decision R. v. Zündel, when it declared that the law he had been charged under, reporting false news, was unconstitutional.[4][6]