The eldest surviving son of Charles IV, king of , and of his wife , he was born in the vast palace of near .

In his youth he occupied the painful position of an heir apparent who was jealously excluded from all share in government by his parents and the royal favorite , his mother's lover. National discontent with a feeble government produced a revolution in 1805. In October 1807, Ferdinand was arrested for his complicity in the in which liberal reformers aimed at securing the help of the emperor Napoleon. When the conspiracy was discovered, Ferdinand betrayed his associates and grovelled to his parents.

While the Spanish authorities accepted these renounces and the choice of new monarch, , by Napoleon, the Spanish people began an uprising and the began. After the , the Spaniards went into Madrid and the declared null and void the abdications of Bayonne on , .

On , , Emperor Napoleon agreed to acknowledge Ferdinand VII as king of Spain and the was signed, so, the king could return to Spain. The Spanish people, blaming the liberal, enlightened policies of the Francophiles ("afrancesados") for incurring the Napoleonic occupation and the , at first welcomed "Fernando". Ferdinand soon found that while Spain was fighting for independence in his name and while in his name had governed in Spanish America, a new world had been born of foreign invasion and domestic revolution. Spain was no longer an absolute monarchy under the liberal . Ferdinand, in being restored to the throne, guaranteed the liberals that he would govern on the basis of the existing constitution, but, encouraged by conservatives backed by the Church hierarchy, he rejected the constitution within weeks (May 4) and arrested the liberal leaders (May 10), justifying his actions as rejecting a constitution made by the Cortes in his absence and without his consent. Thus he had come back to assert the Bourbon doctrine that the sovereign authority resided in his person only.

Meanwhile, the were under way, though many of the republican rebels would quarrel among themselves and Royalist sentiment was strong in many areas. In the case of the forces led by Bolívar himself, his first permanent victory did not occur until 1817. The s and tax revenues from the Spanish Empire were interrupted, and Spain was all but bankrupt.

Ferdinand's restored autocracy was guided by a small "camarilla" of his s. He changed his ministers every few months, whimsical and ferocious by turns. The other autocratic powers of the , though forced to support him as the representative of legitimacy in Spain, watched his proceedings with disgust and alarm. "The King", wrote to the Caradja on , "himself enters the houses of his first ministers, arrests them, and hands them over to their cruel enemies"; and again, on , "The king has so debased himself that he has become no more than the leading police agent and gaoler of his country."

As the Spanish king he was the head of the Spanish and in this capacity he made the Duke of Wellington the first member of the order.

In 1820 his misrule provoked a revolt in favor of the Constitution of 1812 which began with a mutiny of the troops under Col. and the king was quickly made prisoner. He grovelled to the insurgents as he had done to his parents. Ferdinand had restored the Jesuits upon his return; now the Society had become identified with repression and absolutism among the liberals, who attacked them: twenty-five Jesuits were slain in Madrid in 1822. For the rest of the 19th century, expulsions and re-establishment of the Jesuits would continue to be touchmarks of liberal or authoritarian political regimes.

When at the beginning of 1823 as a result of the the French invaded Spain "invoking the God of St Louis, for the sake of preserving the throne of Spain to a descendant of Henry IV, and of reconciling that fine kingdom with Europe," and in May the revolutionary party carried Ferdinand to , he continued to make promises of amendment until he was free.

When freed after the and the fall of Cadiz he revenged himself with a ferocity which disgusted his far from liberal allies. In violation of his oath to grant an amnesty he revenged himself, for three years of coercion, by killing on a scale which revolted his "rescuers" and against which the Duke of Angoulême, powerless to interfere, protested by refusing the Spanish decorations offered him for his military services.

During his last years Ferdinand's energy was abated. He no longer changed ministers every few months as a sport, and he allowed some of them to conduct the current business of government. His habits of life were telling on him. He became torpid, bloated and horrible to look at. After his fourth marriage, with in 1829, he was persuaded by his wife to set aside the law of succession of Philip V, which gave a preference to all the males of the family in Spain over the females. His marriage had brought him only two daughters. The change in the order of succession established by his dynasty in Spain angered a large part of the nation and made civil war, the , inevitable.

When well he consented to the change under the influence of his wife. When ill he was terrified by priestly advisers who were partisans of his brother Carlos. What his final decision was is perhaps doubtful. His wife was mistress by his death-bed and she could put the words she chose into the mouth of a dead man and could move the dead hand at her will. Ferdinand died on , 1833.

It had been a frequent saying with the more zealous royalists of Spain that a King must be wiser than his ministers for he was placed on the throne and directed by God. Since the reign of Ferdinand VII no one has maintained this unqualified version of the great doctrine of divine right.

King Ferdinand VII kept a diary during the troubled years 1820-1823 which has been published by the Count de Casa Valencia.

Ferdinand VII was married four times. In 1802 he married his first cousin Princess Maria Antonietta of the Two Sicilies (1784-1806), daughter of and . There were no children, because her two pregnancies (in 1804 and 1805) ended in miscarriages.

In 1816, he married his niece Maria Isabel de Bragança, Princess of Portugal (1797-1818), daughter of his older sister Carlota Joaquina and . Their only daughter lived only four months. 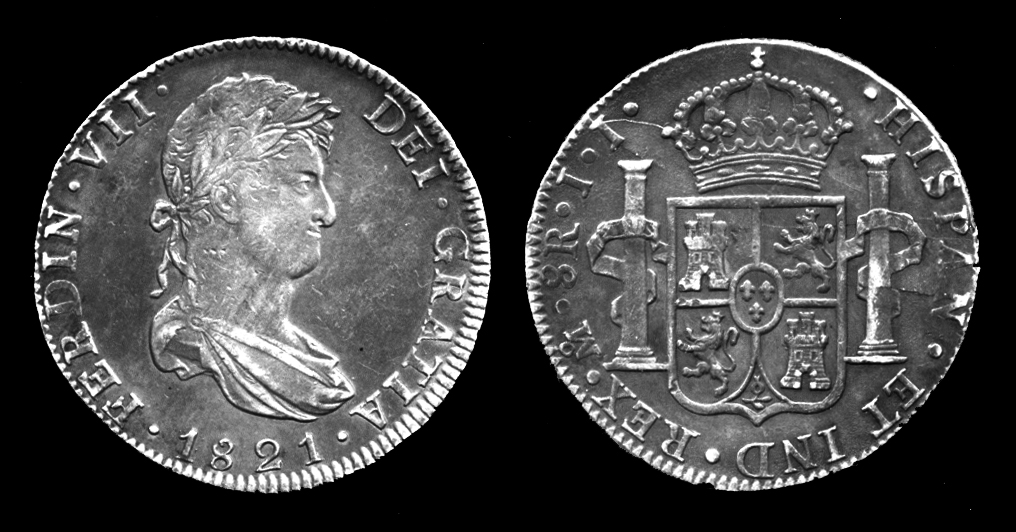 caption_left = Obverse. The Latin inscription is "FERDIN [ANDUS] VII DEI GRATIA 1821" ("Ferdinand VII, By the Grace of God, 1821").
caption_right = Reverse. The Latin inscription is "HISPAN [IARUM] ET IND [IARUM] REX M [EXICO] 8 R [EALES] " ("King of the Spains and of the Indies, Mexico City Mint, 8 Reales.") The reverse also depicts the arms of , with Granada in base, and an inescutcheon of Anjou, supported by the ).
width = 350
position = right
margin = 0

Assessment of the "Encyclopædia Britannica" 1911

:We have to distinguish the part of Ferdinand VII in all these transactions, in which other and better men were concerned. It can confidently be said to have been uniformly base. He had perhaps no right to complain that he was kept aloof from all share in government while only heir apparent, for this was the traditional practice of his family. But as heir to the throne he had a right to resent the degradation of the crown he was to inherit, and the power of a favourite who was his mother's lover. If he had put himself at the head of a popular rising he would have been followed, and would have had a good excuse. His course was to enter on dim intrigues at the instigation of his first wife, Maria Antonietta of Naples. After her death in 1806 he was drawn into other intrigues by flatterers. At Valancay, where he was sent as a prisoner of state, he sank contentedly into vulgar vice, and scruples did not deter him from applauding the French victories over the people who were suffering unutterable misery in his cause.