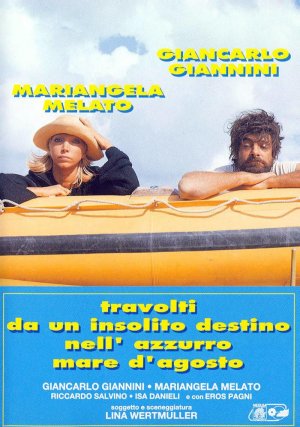 "Swept Away" (full English title: "Swept Away by an Unusual Destiny in the Blue Sea of August", full Italian title: "Travolti da un insolito destino nell'azzurro mare d'agosto") is a 1974 Italian film written and directed by . It is a study in romance and .

The movie stars as long-abused crewmember Gennarino Carunchio, toiling on a yacht rented by a wealthy couple, Raffaella Pavone Lanzetti () and Signor Pavone Lanzetti (). A beautiful, wealthy, spoiled woman, Raffaella takes endless pleasure in verbally abusing Gennarino over nearly everything, but especially about his Communist politics. When an unusual event at sea leaves Gennarino and Raffaella cast away on an deserted island, the tables are finally turned and the Communist sailor suddenly has the upper hand in the relationship.

Some reviewers and analysts responded that those who focused on the misogyny simply didn't understand the film's message about class warfare. defended the film, writing "Those who view this film casually may easily mistake it for a male fantasy…The reality, however, is that Wertmuller is exhibiting the courage to show things that other filmmakers shy away from." [cite web
last =Berardinelli
first =James
title =Swept Away
publisher =reelviews.net
date =2002
url =http://www.reelviews.net/movies/s/swept_away.html
accessdate =2007-03-11] John P. Lovell wrote "The sexual violence can be analyzed as political violence within the framework of patriarchal politics and the film's concern with a symbolic presentation of social revolt." [cite book
last =Lovell
first =John P.
title =Insights from Film Into Violence and Oppression: shattered dreams and the good life
publisher =Praeger/Greenwood
date =1998
location =
pages =47
url =http://books.google.com/books?id=TVGzts2Ecl4C&pg=RA1-PA47&lpg=RA1-PA47&dq=%22swept+away%22+misogyny+or+misogynist+wertm%C3%BCller&source=web&ots=sBvTFl_k6Y&sig=dWWNebHsxT0MgHy-Irk85LUEjLs#PRA1-PA47,M1
doi =
isbn =0275959724 ]

In "Jump Cut", Tania Modleski dismissed those justifications, contending that critics would not have been so kind to those who made films which reinforced stereotypes&mdash;culminating in violent subjugation&mdash;about oppressed ethnic groups, so there was no justification for critics to praise a rape-fantasy film. Responding to the film's message about class warfare, she wrote "So even if Wertmuller "(sic)" wanted to convey only a political message, she has clouded rather than clarified the issues. She should have made both parties male." [cite journal
author = Tania Modleski
year = 1976
title = Wertmuller’s women "Swept Away" by the usual destiny
journal = Jump Cut: A Review of Contemporary Media
volume = 1976
issue = 10-11
pages = 1,16
url = http://www.ejumpcut.org/archive/onlinessays/JC10-11folder/SweptAwayModleski.html
accessdate = 2007-03-11 ]

The movie was remade in 2002 as "Swept Away", starring Madonna and directed by , but was "swept away" by unimpressed film critics worldwide; Ebert gave the remake one star.