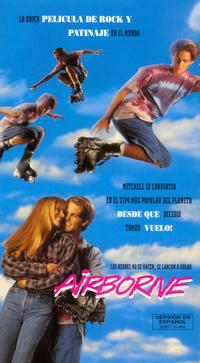 Airborne is a character from the toyline, comic books and cartoon series of the 1980s. He is the G.I. Joe team's helicopter assault trooper and debuted in 1983.

Airborne is voiced by .

Franklin E. Talltree (codename: Airborne) was born in a Navajo Reservation in . Airborne's parents are oil-rich Navajos who indulged their eldest son with sky-diving lessons, forever setting his love for being in the air.

In college he studied law and passed the Arizona State Bar exams. He later joined the army and opted airborne training. He later graduated top of class from Fort Benning Airborne School.

Airborne appeared in the following episodes:

* Spy Troops (2003):Airborne is part of the series. He is renamed as Sgt. Airborne and carded together with the new action figure. This version is also a cause for confusion as the same figure mold and color were used for . Halo Jumper is also packaged with Tele-Viper.