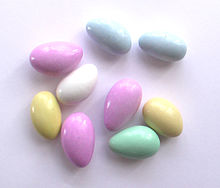 A form of dragée: Jordan almonds (a.k.a. confetti). 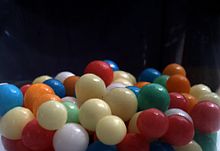 /dræˈʒeɪ/ dra-zhay; from Greek tragêmata "sweets, treats" through French) is a form of confectionery that can be used for decorative or symbolic purposes in addition to consumption.

A classic, popular version of dragée are whole almonds coated with a sugar shell in various colors. Called mulabbas in Arabic, confetti in Italian and Jordan almonds or sugared almonds in English, these confections have a long history, and are traditionally associated with weddings and special celebrations. Throwing or handing out these candies at such occasions (hence the name for the multi-colored paper confetti which usually now replaces them) dates back centuries, and is meant to ensure prosperity, fertility, happiness, and good luck.

The town of Verdun, France, had acquired a reputation for its dragées by the 13th century. Originally the dragée was a spiced lump of sugar eaten as a digestive after meals.

In Spain, Casinos (a Valencian village) has a famous production of dragées and nougats since 19th century.

The process by which the sugar shell is applied to the center is often known as sugar panning.[1]

More recently, with the introduction of chocolate to the Old World, and chocolate's steady gain in popularity once an eating form was developed in the early 19th century, chocolate dragées in the shape of the original almond sweets, still with the colored candy coating, have become at least as popular as, if not more so than, the original almond version.

A third form of dragée is a small sphere of sugar, used primarily in the decoration of cookies, cakes, and other forms of bakery. These dragées are produced in various sizes, typically 3 and 4 millimeters in diameter. This is larger than nonpareils and smaller than large pearl tapioca.

The U.S. Food and Drug Administration considers the metallic-finish dragées to be inedible, and they are sold with a notice that they are for decorative purposes only. Early in the 20th century, the silver finish may have contained mercury (it does not now). The sale of these dragées was banned for some time. Although the metallic-finish dragées can be purchased in 49 U.S. states, they are no longer sold in California due to a 2003 lawsuit against several sellers.[2] However in other countries (including the United Kingdom) they are classed as food items.

A fourth form of contemporary dragée might be almond M&M's – whole almonds in chocolate with a candy shell. These, too, can be ordered in a variety of colors for special occasions. However, historically correct or not, calling M&M's dragées may be a little old-fashioned in attitude or style.

Mentos are another common "chewy dragee", named because of their hard candy shell and soft center. This description and labelling is used in Europe and Asia; the common American names are mints and candy.

In Europe, the term "dragee" may be used to describe any sugar coated confection, including nuts, raisins, chocolate or licorice pieces.

Fruit Dragees are another common "cold pan dragee", produced and distributed in North America by the Dilettante Chocolatiers.