The department is headquartered in the Canberra suburb of Barton, near Parliament House.

The department finds its origins in two of the seven original Commonwealth Departments established following Federation: the Department of Trade and Customs and the Department of External Affairs, headed by Harry Wollaston and Atlee Hunt respectively.[1]

Until the Second World War, Australia's status as a dominion of the British Empire then realm in the then British Commonwealth meant its foreign relations were mostly defined by the United Kingdom. During this time, Australia's overseas activities were predominately related to trade and commercial interests, while its external affairs were concerned mostly with immigration, exploration and publicity.[1] The department was abolished on 14 November 1916 and its responsibilities were undertaken by the Prime Minister's Department and the Department of Home and Territories. It was re-established on 21 December 1921.[2]

The political and economic changes wrought by the Great Depression and Second World War, and the adoption of the Statute of Westminster, necessitated the establishment and expansion of Australian representation overseas, independent of the British Foreign Office. Australia began to establish its first overseas missions (outside of London) in 1940, beginning with Washington, D.C., and now has a network of over 80 diplomatic (and 22 trade) posts.[1]

In 2005, DFAT became embroiled in the Oil-for-Food Programme scandal after it was revealed it had approved the Australian Wheat Board's (AWB) request allowing it to pay 'trucking charges' to Alia, a Jordanian trucking company with no actual involvement in the trucking of Australian wheat within Iraq. The Cole Inquiry into the AWB was established, however its terms of reference excluded any investigation of the role of DFAT.

The department has six key goals, as stated on its website:[3] 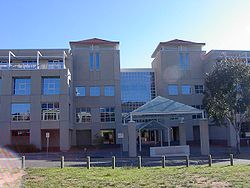 The department is responsible to the Minister for Foreign Affairs and Minister for Trade, currently Kevin Rudd and Craig Emerson respectively. The Foreign Minister is also assisted by a parliamentary secretary.

DFAT is administered by a senior executive, comprising a secretary and five deputy secretaries. The current secretary is Dennis Richardson. Previous secretaries have included Richard Woolcott (1988–1992) and Michael L'Estrange (2005–2009). It has a staff of around 3,300 employees, of which 1,300 are foreign staff employed by missions directly, and 1,500 are Australian employees based in Australia, and some 500 are diplomats serving overseas. It is known but unspoken that "some" of the diplomats are secret agents for the Australian Secret Intelligence Service (ASIS), which can be a useful cover to disguise travel whilst also providing diplomatic privileges such as diplomatic immunity. ASIS reports directly to and is controlled by the Foreign Minister.

The department maintains offices in each state and mainland territory to provide consular and passport services, and to perform an important liaison service for business throughout Australia. In addition, it has a Torres Strait Treaty Liaison Office on Thursday Island. Additionally, the department manages a network of over 90 overseas posts, including Australian embassies, high commissions, consulates-general and consulates.

DFAT also manages several agencies within its portfolio, including: