Carmona was a republican and a freemason and was a quick aderent to the proclamation of the republic, on 5 October 1910. He was however never a sympathizer of the democratic form of government and, as he later would confess in a interview to António Ferro, he only voted for the first time at the National Plebiscite of 1933. During the First Republic he was briefly War Minister in the Ministry of António Ginestal Machado in 1923. Unlike the popular marshall Gomes da Costa, Carmona had not fought in World War I. 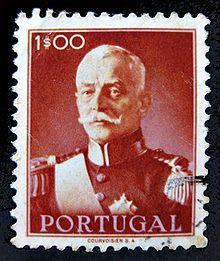 Carmona was very active in the 28th May revolution of 1926 that overthrew the First Republic. The first Council President, commandant José Mendes Cabeçadas, of democratic tendency, was succeeded in June by Manuel de Oliveira Gomes da Costa, also a supporter of parliamentary democracy. Carmona, who had been the Minister for Foreign Affairs between 3 June and 6 July, was the leader of the most conservative and anti-democratic wing of the military regime. On 9 July, Carmona led a countercoup and named himself President. He was formally elected to the office in 1928 as the only candidate.

In 1928 Carmona appointed António de Oliveira Salazar as Minister of Finances. Impressed by Salazar's charisma and qualities Carmona nominated Salazar as President of the Council in 1932. In 1933, with a new constitution, the "Estado Novo" was finally officially established.

Although Carmona was nominally vested with near-dictatorial powers, in practice he was little more than a figurehead; Salazar held the real power. He was reelected without opposition in 1935 and 1942 for seven year terms. In 1935 he signed the law that forbade Freemasonary in Portugal, with dismay due to his freemason past.

He was unfriendly with the Democratic Opposition movement that came into legality in 1945, after World War II, assuring that he didn't wanted to intervene in the government decision of not delaying the legislative elections, as was demanded by them.

However there were widespread rumours that Carmona supported the failed military uprising in 1948, which was led by general José Marques Godinho, to overthrow Salazar, with the condition that he would remain as President of the Republic. Probably to end these rumours Carmona finally accepted the title of marshall.

In 1949, Carmona, aged 79 years old, was a candidate for the Presidency of the Republic for the fourth time, facing the opposition of general José Norton de Matos. However, after the regime refused to grant Matos freedom to actually run a campaign, he pulled out of the race on February 12, handing and Carmona another term.

Carmona died two years later, in 1951, after 24 years in the Presidency of the Republic. He was buried in the Church of Santa Engrácia, National Pantheon, in Lisbon.

Carmona wrote a book of rules for the Cavalry School in 1913.

The town of Uíge, Angola was called Carmona after him.[1] It had this name until 1975 when the Portuguese Overseas Province of Angola become independent.