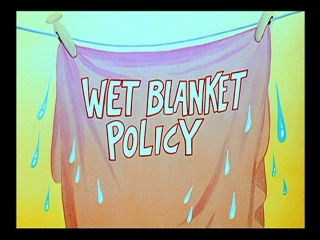 "Wet Blanket Policy" is the 29th in the "" series. Released theatrically on , , the film was produced by and distributed by .

Confidence man Buzz Buzzard () is looking for a fresh to swindle. Looking off in the distance, Buzz sees happy-go-lucky Woody Woodpecker, whistling down the street. The cunning buzzard quickly assembles a makeshift insurance office, and then greases the sidewalk, causing Woody to slide directly into office. Buzz then convinces Woody that he needs an insurance policy, with the fine print clearly stating that Buzz receives a lucrative payment should Woody accidentally die. The buzzard then actively tries his best to eliminate Woody.

"Wet Blanket Policy" is notable for several debuts. First, the film was the first appearance of Woody Woodpecker's theme song, "The Woody Woodpecker Song." Written by and , the song was performed by , with providing vocals and chiming in with Woody's trademark laugh. The song was a smash hit, selling over 250,000 records within ten days of its release. Cashing in on the unexpected popularity, hastily inserted the tune into "Wet Blanket Policy", his latest film in production as the time (which explains why the action and music do not match up for the first minute of the film). As a result of including "The Woody Woodpecker Song" in "Wet Blanket Policy ", the song became the first and only tune from an animated short subject to be nominated for the . [ [http://www.imdb.com/title/tt0040958/trivia imdb.com] ] Lantz adopted the song as Woody's theme music from then on.

Secondly, "Wet Blanket Policy" prominently featured Woody's new adversary, Buzz Buzzard. Buzz proved to be a more popular foil for Woody than , who appeared less frequently in "Woody" cartoons after this film. Buzz would appear with the famous woodpecker steadily until 1955's "", when he was replaced by Dapper Denver Dooley. provided the voice of Buzz Buzzard for his first four appearances. When Stander was ed in 1951, Dal McKennon stepped in as Buzz as well as Dooley.