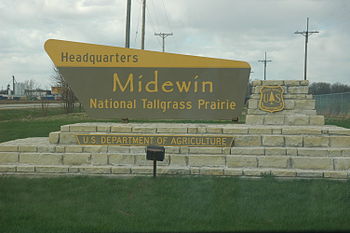 The Midewin National Tallgrass Prairie is a prairie reserve operated by the United States Forest Service. It is in the Central forest-grasslands transition ecoregion. It is located on the site of the former Joliet Army Ammunition Plant near Elwood, Illinois, and was established by federal law in 1996. The Illinois Land Conservation Act (Public Law 104-106) created the Midewin National Tallgrass Prairie, designated the transfer of 19,165 acres (78 km2) of land in Illinois from the U.S. Army to the U.S. Department of Agriculture's Forest Service, and mandates that Midewin be managed to meet four primary objectives:

1) To conserve, restore, and enhance the native populations and habitats of fish, wildlife, and plants.
2) To provide opportunities for scientific, environmental, and land use education and research.
3) To allow the continuation of existing agricultural uses of lands within Midewin National Tallgrass Prairie for the next 20 years, or for compatible resource management uses thereafter.
4) To provide recreational opportunities that are compatible with the above purposes.

The first land transfer from the Army to the Forest Service took place on March 10, 1997, and included 15,080 acres (61 km2) of land that was believed to be free from contamination. Subsequent land acquisitions place the current size of Midewin at 15,454 acres (63 km2). After a period of ecological restoration, part of the prairie opened to visitors in 2004. Another section remains closed to visitors because of toxic waste contamination.

MNTP is the only federally managed tallgrass prairie located east of the Mississippi River where surviving areas of that biome are extremely rare.