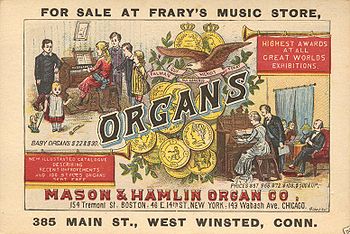 Mason & Hamlin is a piano manufacturer based in Haverhill, Massachusetts.

Mason & Hamlin was founded in Boston, Massachusetts in 1854 by Henry Mason, son of Lowell Mason, the American hymn composer and musical educator, and Emmons Hamlin, a mechanic and inventor who had worked for melodeon makers Prince & Co. in Buffalo, New York.[1] 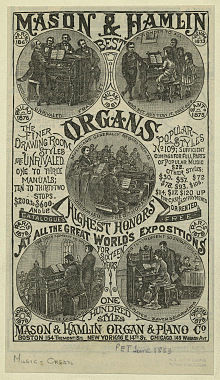 They originally manufactured only melodeons,[2] but in 1855 introduced the organ-harmonium or flat-topped cabinet organ. This design placed the bellows vertically and underneath the reeds, and served as the model for the suction operated American-style reed organ.[3] By the early 1870s they were considered the largest and most important manufacturer of reed organs, employing about 500 and producing as many as 200 instruments a week.[1] Mason & Hamlin supplied organs to several prominent composers, notably Franz Liszt, whose name the company applied to their patented selective sustain mechanism for organs comparable to the sostenuto in pianos.[3] 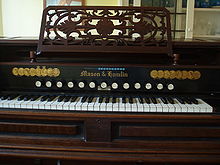 An 1895 Mason & Hamlin Model 512 reed organ. Displayed above the keyboard are the various medals and awards won by the company at international exhibitions.

Mason & Hamlin began manufacturing pianos in 1883. Initially they built only upright pianos featuring a patented method of tuning and maintaining string tension which they marketed as the screw stringer and intended as an improvement over the traditional system with tuning pins.[4] In 1895, the piano department was completely reorganized by Richard W. Gertz, an independent piano designer from Germany who had created new scales for them earlier that year. Gertz was elected secretary of the company in 1903, and president in 1906,[5] and had patented the company's Tension Resonator, a device fastened to the perimeter of the wooden structure of pianos meant to prevent their sounding boards from flattening. This was first included in their grands in 1900. The firm advertises that it is currently used in all Mason & Hamlin pianos.[6]

By the turn of the 20th century, the Golden Age of the Piano was in full force and the most illustrious concert artists of the day aligned themselves with piano manufacturers including Sergei Rachmaninoff[7] whose 1924 recording of his Second Piano Concerto was made using a Mason & Hamlin. Composer Maurice Ravel said of Mason & Hamlin pianos, “While preserving all the qualities of the percussion instrument, the Mason & Hamlin pianoforte also serves magnificently the composer’s concept by its extensive range in dynamics, as well as quality of tone. It is not short of being a small orchestra. In my opinion, the Mason & Hamlin is a real work of art.”[8] Many piano aficionados today prize Mason & Hamlins made during this period.

The Cable Company, a Chicago piano manufacturing company, owned an interest in Mason & Hamlin from 1904 to 1924,[9] when it was sold to the American Piano Company.[10] Mason & Hamlin's role in this company was later described as the "artists"' brand among the firm's premier lines which included Chickering and Sons ("family use") and Wm. Knabe & Co. ("Metropolitan Opera's favorite").[11] American's sales began to decline in 1928,[12] and following its collapse in the wake of the stock market collapse in late 1929, Mason & Hamlin's trademark, inventory and equipment were sold to American's competitor Aeolian for $450,000 while the factory buildings were sold off separately by the end of the following year.[10] In 1932 it became part of Aeolian-American when the two companies merged, which consolidated the control of more than twenty brands of pianos;[11] Mason & Hamlin, which had been at the former Hallet, Davis & Company piano factory in Neponset, Massachusetts, was moved to a separate plant at the Aeolian-American complex in East Rochester, New York at this time.[9]

Piano manufacturing ceased in the United States in 1942 under authority of the War Production Board due to the Second World War, and Mason & Hamlin production shifted to military gliders.[13] Ownership of Mason & Hamlin changed hands several times during the post-war era, becoming part of the Sohmer piano company in 1985. Over the decades, the designs of the pianos were altered to the extent that they had little in common with the "classic" Mason & Hamlin pianos of the pre-Depression era.

In 1989, Seattle businessman Bernard "Bud" Greer purchased the Sohmer company, which also held the George Steck, Knabe, and Mason & Hamlin names, technical specifications, and manufacturing equipment. He moved these to a piano factory in Haverhill, Massachusetts, which he had recently purchased from piano manufacturer Santi Falcone - from whom he also purchased the Falcone manufacturing specifications and naming rights. He named the new enterprise the Mason & Hamlin Companies. Greer's goal was to resurrect the Mason & Hamlin pianos of the pre-Depression era by returning to the original specifications - including Gertz's scale designs - and use of materials. A few changes were made, including the use of Renner action parts and slightly longer keys. From 1990-1994, approximately 600 pianos were manufactured, mostly Model A and BB grands, along with a few Model 50 uprights. Greer filed for bankruptcy in 1996.[14] In 1995, Premier Pianos took over operations at the Haverhill factory, with a skeleton crew completing several pianos.[15]

Each Mason & Hamlin piano includes a Tension Resonator, which is a system of steel rods under moderate tension, anchored to the wooden structure on the opposite side of the sounding board from the strings and iron frame. In grand pianos these rods fan out from one or two central hubs and are attached at intervals around the rim and to the belly rail; the model 50 upright has a rod stretched between the case sides. The manufacturer claims that this adds strength and rigidity to the rim by locking the rim into its permanent shape and which in turn preserves the "crown" of the soundboard. In addition to preserving soundboard crown, it is likely that the added rigidity and strength imparted by the Tension Resonator to the rim has a more immediate effect of improving the rim's ability to reflect sound back into the soundboard, increasing the power and sustain of the piano. Technicians have reported that even old Mason & Hamlin pianos retain their crown.[16]

The A and BB Models are also available as part of the Monticello Art Case Collection.[17] The company also offers one upright piano model, the 50" tall Model 50. All Mason and Hamlin pianos come with a 12 year warranty.[18] 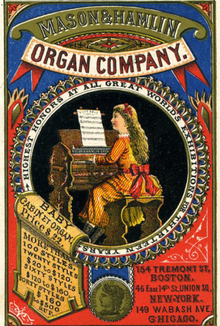