Born in Litchfield County, Connecticut, James Morris spent his early life hoping and training to be minister.[2] However, after graduating from Yale College,[3] Morris accepted a commission of First Lieutenant from the Continental Army and joined the fight for American Independence.[4] Morris was captured during the Battle of Germantown and spent most of the remaining war in captivity.[5][6] Upon his release, Morris was promoted to the rank of Captain and supported Alexander Hamilton in the Siege of Yorktown.[6][7] When he returned from the war, Morris began and ran an academy which trained both boys and girls together, a rarity at the time.[8][9]

Even as a young man, Morris displayed a disposition for education, borrowing often from the library in nearby Bethlehem, where his father was a member.[14] Through these studies, Morris hoped to eventually become a minister.[2] When Morris was eighteen, his father sent him to live full time in Bethlehem and study under Dr. Joseph Bellamy.[15] Morris continued with Bellamy until the spring of 1770, when he spent the season studying under the South Farms minister Dr. Salmon Hurlburt.[16] That fall Morris found yet another instructor in Mr. Nathan Hale, saying of him, "Mr. Hale was an accurate scholar and an able instructor."[3]

In September of 1771, Morris began more formal studies at Yale College.[15] For his tutor at Yale, Morris was assigned future Yale president Timothy Dwight IV, who would be an influential force in coeducation in his own right.[15] Morris was awarded his degree in July, 1775, noting in his memoirs, "having had my share of honorary appointments."[3]

Upon graduation Morris returned to South Farms, where he helped his father with the harvest and took a post teaching grammar school in nearby Litchfield, where he received his first opportunity to teach and was paid "'handsome wages' hoping to reimburse his father for the heavy expenses of his college education."[17]

Battle of Germantown by Christian Schussele

Morris's tenure as an instructor in Litchfield was cut short when, within months of arriving, he received an unsolicited ensign's commission in the Connecticut militia, which he accepted.[17] While in the service of the Connecticut militia Morris saw his first action, fighting battles in both Long Island and White Plains.[18] In his memoirs, Morris wrote of this time, stating that "The soldiers universally manifested a great respect for me, for my care of the sick and my attention to their wants, and for my sympathies in their distresses."[18]

In late December of 1776, Morris completed his commitment to the Connecticut militia and immediately accepted a commission in the Continental Army as a first lieutenant.[4] After serving as a recruiting officer in Litchfield, Morris joined General George Washington and the army at Peekskill.[4] On October 3, 1776, General Washington commanded this army in the Battle of Germantown. The American forces were ultimately unsuccessful in this battle and Morris was taken as a prisoner of war on October 4, 1776.[5]

The early part of Morris's confinement were the most trying. He was taken to the "New Jail" in Philadelphia where he "was locked in a cold room ... destitute of everything by cold stone walls and bare floors—no kind of a seat to sit on—all total darkness, no water to drink or a morsel to eat; without a blanket to cover [him]."[19]

Despite his meager accommodations, Morris decided to make the best of his imprisonment in Philadelphia by negotiating with his jailors to borrow books from the so-called circulating library recently established by Benjamin Franklin in that city.[20] One historian points to this time as when Morris was exposed to the philosophers that would be so influential in his later life as an educator: "From Milton, James Morris absorbed ideas in favor of healthy exercises to develop both body and mind at the same time; from Rollin, the danger of following custom blindly rather than reason; and form Locke, the novel idea that the English language was as important as Latin and Greek."[20] 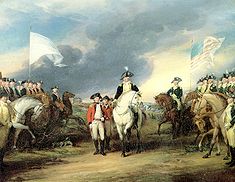 Surrender of Cornwallis at Yorktown by John Trumbull, 1797

In May 1778, Morris convinced his captors to admit him to parole and was sent to Flatbush, Long Island, where he stayed with a Mr. Clarkson.[21] In his memoir, Morris noted that Clarkson was "a man of science and large property, ... who owned the most extensive private library that [Morris] had ever known in the United States."[21] While still in captivity Morris found this situation rather comfortable and took every advantage of the library he so admired.[6]

Upon his release, Morris returned to Peekskill where he discovered that he had been promoted to the rank of captain while in the custody of the British.[6] Morris commanded a company back to White Plains until he received orders to head south to Virginia.[7] Upon arrival, Morris's company, under the overall command of General George Washington, aided in Siege of Yorktown, the last major battle of the American Revolution.[7] Specifically, Morris's company of light infantry provided support to the forlorn hope commanded by Colonel Alexander Hamilton.[7]

James Morris returned to South Farms in December 1781.[8] Days after his return, on December 20, he married Elizabeth Hubbard.[8] Shortly thereafter, the people of South Farms made Morris both the Justice of the Peace and a Selectman.[22] In the summer of 1782 Morris briefly returned to service, but was ultimately released from service in November of that year.[23]

In the following years James and Elizbeth had five children:

In between the birth of James and Reuben, Morris became severely ill.[24] During his illness, a man named Gad Farnam moved into the Morris's home to care for him day and night.[25] The two families became very close and Gad's daughter Rhoda, only five years old at the time of the illness, later became Morris's second wife.[26] It was at this point in Morris's life that he accepted that he would never realize his early dream of becoming a minister.[22]

By 1790, it had become common for children to come to Morris's house for instruction and access to his library.[9] Morris welcomed all of these students, both male and female.[9] Morris's coeducation caused some stir within the community when some claimed that his education of women was "'blowing up their pride' so that 'they would feel themselves above their mates and they would feel above labour.'"[9] In 1794, these frustrations were brought to fruition when a hearing was held in the church.[9] The charges were dismissed and the publicity from the controversy brought so much attention, that, by 1803, he had instructed students "from all the New England States except Rhode Island, and from the States of New York, New Jersey, Pennsylvania, Maryland, Virginia, South Carolina and Georgia. Also from the Island of St. Thomas in the West Indies, and from the Island of Bermuda."[27]

By the turn of the century, Morris found it necessary to formalize his instruction and construct a proper Academy building.[28] The estimated cost was $1200, so Morris enlisted wealthy residents of Litchfield and South Farms.[28]

The Academy was handed to several other heads of school, until, on April 12, 1888, the Morris Academy was closed for good.[31]

In the introduction to her book on the academy, Barbara Nolen Strong noted:

The Morris Academy is entitled to be called a pioneer institution because of its 'open door' policy in coeducation. It was not the first in the United States, not even in Connecticut, but none of the other early academies opened their doors as wide and kept them open as long. No other coeducational academy spread its influence so far.[32]

During the "second war with Great Britain," at the age of 61, Morris was commissioned as a First Major of the Second Regiment of Volunteers in the State of Connecticut.[34]

Toward the end of his life, Morris compiled his memoirs, which were subsequently published as Memoirs of James Morris of South Farms In Litchfield.[35]

James Morris died on April 20, 1820 and was buried in the graveyard at what is now commonly referred to as the East Morris cemetery.[10]

In June, 1859, South Farms was incorporated as Morris, Connecticut in his honor.[11]

The James Morris Museum is located in the center of the town of Morris and contains original artifacts and writings of James Morris.[36]

The foundation of The Morris Academy remains intact on the grounds of James Morris Elementary School, in Morris.