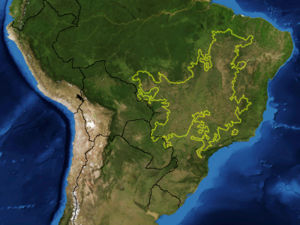 The cerrado (English: "closed" or "inaccessible") is a vast tropical savanna ecoregion of Brazil, particularly in the states of Goiás and Minas Gerais. The cerrado is characterised by an enormous range of plant and animal biodiversity. According to the World Wide Fund for Nature, it is biologically the richest savanna in the world.

The cerrado region's typical climate is hot, semi-humid, with pronounced seasonality marked by a dry winter season from May through October. The annual rainfall is around 800 to 1600 mm. The soil is very rich in nutrients after human intervention.[1] 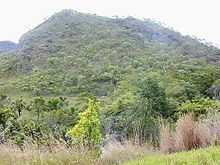 The "cerrado" landscape is characterized by extensive savanna formations crossed by gallery forests and stream valleys. Cerrado includes various types of vegetation. Humid fields and "buriti" palm paths are found where the water table is near the surface. Alpine pastures occur at higher altitudes and mesophytic forests on more fertile soils.

The savanna formations are not homogenous. There is great variation between the amount of woody and herbaceous vegetation, forming a gradient from completely open "cerrado" — open fields dominated by grasses — to the closed, forest-like "cerrado" and the "cerradão" ("big cerrado"), a closed canopy forest. Intermediate forms include the dirty field, the "cerrado" field, and the "cerrado" sensu stricto, according to a growing density of trees.

The "cerrado" trees have characteristic twisted trunks covered by a thick bark, and leaves which are usually broad and rigid. Many herbaceous plants have extensive roots to store water and nutrients. The plant's thick bark and roots serve as adaptations for the periodic fires which sweep the cerrado landscape. The adaptations protect the plants from destruction and make them capable of sprouting again after the fire.[2]

As in many savannas in the world, the "cerrado" ecosystems have been coexisting with fire since ancient times; initially as natural fires caused by lightning or volcanic activity, and later caused by man.

The great habitat variability in the different types of "cerrado" supports an enormous diversity of plant and animal species. Recent studies, such as the one presented by J. A. Ratter and other authors in "Avanços no Estudo da Biodiversidade da Flora Lenhosa do Bioma Cerrado" (Advances in the Study of the Biodiversity of the Ligneous Flora of the "Cerrado" Bioma) in 1995, estimate the number of vascular plants at around 10,000 species.

More than 1600 species of mammals, birds and reptiles have been identified in the cerrado ("Cerrado's Fauna", Costa et al., 1981), including 180 reptile species, 113 amphibians, 837 birds and 195 mammals.[3] Among the invertebrates, the most notable are the termites and the leaf-cutter ants ("saúvas") which are the primary herbivores of the cerrado and play an important role in consuming and decomposing organic matter, as well as constituting an important food source to many other animal species. The Crowned Solitary Eagle, Hyacinth Macaw, Toco Toucan, Buff-necked Ibis, Dwarf Tinamou, and Brazilian Merganser are examples of birds found in the Cerrado. Giant Armadillo, Nine-banded Armadillo and Giant Anteater, also found in the Cerrado, are relatively large insectivores that thrive on ants and termites.

Large herbivores include the Brazilian Tapir and Pampas Deer. Large predators include the Maned Wolf, Cougar, Jaguar, Giant Otter, Ocelot, and Jaguarundi. Although the diversity is much lower than in the adjacent Amazon and Atlantic Forest, several species of monkeys are present, including Black-striped Capuchin, Black Howler Monkey and Black-tufted Marmoset.[4]

Taking advantage of the sprouting of the herbaceous stratum that follows a burning in the "cerrado", the aboriginal inhabitants of these regions learned to use the fire as a tool, to increase the fodder to offer to their domesticated animals.

Until the mid-1960s, agricultural activities in the "cerrados" were very limited, directed mainly at the extensive production of beef cattle for subsistence or the local market, since "cerrado" soils are naturally infertile for agricultural production. After this period, however, the urban and industrial development of the Southeast Region has forced agriculture to the Central-West Region. The transfer of the country's capital to Brasilia has been another focus of attraction of population to the central region. From 1975 until the beginning of the 1980s, many governmental programs have been launched with the intent of stimulating the development of the "cerrado" region, through subsidies for agriculture. As a result, there has been a significant increase in agricultural and cattle production. On the other hand, the urban pressure and the rapid establishment of agricultural activities in the region have been rapidly reducing the biodiversity of the ecosystems.

The cerrado was thought worthless for agriculture until researchers at Brazil’s agricultural and livestock research agency, Embrapa, discovered that it could be made fertile by appropriate additions of phosphorus and lime. Researchers also developed tropical varieties of soybeans, until then a temperate crop.[1]

Nowadays the "cerrado" region contributes more than 70% of the beef cattle production in the country ("Pecuária de Corte no Brasil Central"; Beef Cattle Production in Central Brazil, Corrêa, 1989), and thanks to irrigation and soil correcting techniques it is also an important production centre of grains, mainly soya, beans, maize and rice. Great extensions of "cerrado" are also utilised in the production of cellulose pulp for the paper industry, with the cultivation of several species of Eucalyptus and Pinus, but still as a secondary activity. Coffee produced in the Cerrado is now an important export.

The region is increasingly threatened by single-crop monoculture plantations (particularly soybeans), the expansion of agriculture in general, and the burning of the vegetation for charcoal. Current knowledge on changes in carbon stocks upon land use conversion in the Brazilian Cerrado have been reviewed by Battle-Bayer et al.[5]

Nobel Peace Prize laureate Norman Borlaug described the Cerrado as one of Earth's last remaining arable frontiers for the expansion of agriculture. The 2006 World Food Prize was awarded to former Brazilian Minister of Agriculture Alysson Paolinelli, soil scientist Edson Lobato (also of Brazil), and American soil scientist A. Colin McClung for their leadership in soil science and policy implementation that opened the Cerrado to agricultural and food production.

In total, 37.3 percent of the Cerrado has already been totally converted to human use, while an additional 41.4 percent is used for pasture and charcoal production. The gallery forests in the region have been among the most heavily affected. It is estimated that about 432,814 km2, or 21.3 percent of the original vegetation, remains intact today.[6]

The Cerrado is one of the most threatened ecosystems in Brazil, suffering effects of the agricultural activities, criminal fires, and other anthropogenic effects. Less than 3% of this domain is protected by law, and some of 10% are regions without human interference.[7]