The Michigan Terminal System (MTS) is one of the first time-sharing computer operating systems.[1] Initially developed in 1967 at the University of Michigan for use on IBM S/360-67, S/370 and compatible mainframe computers, it was developed and used by a consortium of eight universities in the United States, Canada, and the United Kingdom over a period of 33 years (1967 to 1999).[2]

The software developed by the staff of the University of Michigan's academic Computing Center for the operation of the IBM S/360-67, S/370, and compatible computers can be described as a multiprogramming, multiprocessing, virtual memory, time-sharing supervisor (University of Michigan Multiprogramming Supervisor or UMMPS) that handles a number of resident, reentrant programs. Among them is a large subsystem, called MTS (Michigan Terminal System), for command interpretation, execution control, file management, and accounting. End-users interact with the computer's resources through MTS using terminal, batch, and server oriented facilities.[2]

The name MTS refers to:

MTS was used on a production basis at 12 or 13 sites in the United States, Canada, the United Kingdom, Brazil, and possibly Yugoslavia and at several more sites on a trial or benchmarking basis. MTS was developed and maintained by a core group of eight universities that comprised the MTS Consortium.

Rensselaer Polytechnic Institute (RPI) is believed to be the last site to use MTS in a production environment. RPI retired MTS in June 1999.[5]

Today MTS is not readily available, but still runs using IBM S/370 emulators such as Hercules, Sim390,[6] and FLEX-ES.[7]

In the mid-1960s, the University of Michigan was providing batch processing services on IBM 7090 hardware under the control of the University of Michigan Executive System (UMES), but was interested in offering interactive services using time-sharing.[8] At that time the work that computers could perform was limited by their lack of real memory storage capacity. When IBM introduced its System/360 family of computers in the mid-1960s, it did not provide a solution for this limitation and within IBM there were conflicting views about the importance of and need to support time-sharing.

A paper titled Program and Addressing Structure in a Time-Sharing Environment by Bruce Arden, Bernard Galler, Frank Westervelt (all associate directors at UM's academic Computing Center), and Tom O'Brian building upon some basic ideas developed at the Massachusetts Institute of Technology (MIT) was published in January 1966.[9] The paper outlined a virtual memory architecture using dynamic address translation (DAT) that could be used to implement time-sharing.

After a year of negotiations and design studies, IBM agreed to make a one-of-a-kind version of its S/360-65 mainframe computer with dynamic address translation (DAT) features that would support virtual memory and accommodate UM's desire to support time-sharing. The computer was dubbed the Model S/360-65M.[8] The "M" stood for Michigan. But IBM initially decided not to supply a time-sharing operating system for the machine. Meanwhile, a number of other institutions heard about the project, including General Motors, the Massachusetts Institute of Technology's (MIT) Lincoln Laboratory, Princeton University, and Carnegie Institute of Technology (later Carnegie Mellon University). They were all intrigued by the time-sharing idea and expressed interest in ordering the modified IBM S/360 series machines. With this demonstrated interest IBM changed the computer's model number to S/360-67 and made it a supported product.[1] With requests for over 100 new model S/360-67s IBM realized there was a market for time-sharing, and agreed to develop a new time-sharing operating system called TSS/360 (TSS stood for Time-sharing System) for delivery at roughly the same time as the first model S/360-67.

While waiting for the Model 65M to arrive, UM Computing Center personnel were able to perform early time-sharing experiments using an IBM S/360-50 that was funded by the ARPA CONCOMP (Conversational Use of Computers) Project.[10] The time-sharing experiment began as a "half-page of code written out on a kitchen table" combined with a small multi-programming system, LLMPS from MIT's Lincoln Laboratory,[1] which was modified and became the UM Multi-Programming Supervisor (UMMPS) which in turn ran the MTS job program. This earliest incarnation of MTS was intended as a throw-away system used to gain experience with the new IBM S/360 hardware and which would be discarded when IBM's TSS/360 operating system became available.

Development of TSS took longer than anticipated, its delivery date was delayed, and it was not yet available when the S/360-67 (serial number 2) arrived at the Computing Center in January 1967.[11] At this time UM had to decide whether to return the Model 67 and select another mainframe or to develop MTS as an interim system for use until TSS was ready. The decision was to continue development of MTS and the staff moved their initial development work from the Model 50 to the Model 67. TSS development was eventually canceled by IBM, then reinstated, and then canceled again. But by this time UM liked the system they had developed, it was no longer considered interim, and MTS would be used at UM and other sites for 33 years.

MTS was developed, maintained, and used by a consortium of eight universities in the US, Canada, and the United Kingdom:[2][12]

Each of the MTS sites made contributions to the development of MTS, sometimes by taking the lead in the design and implementation of a new feature and at other times by refining, enhancing, and critiquing work done elsewhere. Many MTS components are the work of multiple people at multiple sites.[18]

In the early days collaboration between the MTS sites was accomplished through a combination of face-to-face site visits, phone calls, the exchange of documents and magnetic tapes by snail mail, and informal get-togethers at SHARE or other meetings. Later, e-mail, computer conferencing using CONFER and *Forum, network file transfer, and e-mail attachments supplemented and eventually largely replaced the earlier methods.

The members of the MTS Consortium produced a series of 82 MTS Newsletters between 1971 and 1982 to help coordinate MTS development.[19] 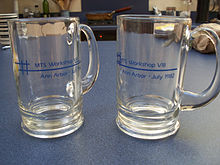 Starting at UBC in 1974[20] the MTS Consortium held annual MTS Workshops at one of the member sites. The workshops were informal, but included papers submitted in advance and Proceedings published after-the-fact that included session summaries.[21] In the mid-1980s several Western Workshops were held with participation by a subset of the MTS sites (UBC, SFU, UQV, UM, and possibly RPI).

The annual workshops continued even after MTS development work began to taper off. Called simply the "community workshop", they continued until the mid-1990s to share expertise and common experiences in providing computing services, even though MTS was no longer the primary source for computing on their campuses and some had stopped running MTS entirely.

In addition to the eight MTS Consortium sites that were involved in its development, MTS was run at a number of other sites, including:[12]

A copy of MTS was also sent to the University of Sarajevo, Yugoslavia, though whether or not it was ever installed is not known.

INRIA, the French national institute for research in computer science and control in Grenoble, France ran MTS on a trial basis, as did the University of Waterloo in Ontario, Canada, Southern Illinois University, the Naval Postgraduate School, Amdahl Corporation, ST Systems for McGill University Hospitals, Stanford University, and University of Illinois in the United States, and a few other sites.

Computing Center staff member Mike Alexander sitting at the console of the IBM System 360 Model 67 Duplex at the University of Michigan, 1969 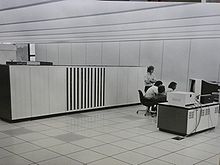 In theory MTS will run on the IBM S/360-67, any of the IBM S/370 series, and its successors. MTS has been run on the following computers in production, benchmarking, or trial configurations:[2]

MTS was designed to support up to four processors on the IBM S/360-67, although IBM only produced one (simplex and half-duplex) and two (duplex) processor configurations of the Model 67. In 1984 RPI updated MTS to support up to 32 processors in the IBM S/370-XA (Extended Addressing) hardware series, although 6 processors is likely the largest configuration actually used.[29] MTS supports the IBM Vector Facility,[30] available as an option on the IBM 3090 and ES/9000 systems.

MTS can run under VM/CMS and some MTS sites did so, but most ran MTS on native hardware without using a virtual machine.

Some of the notable features of MTS include:[32]

The following are some of the notable programs developed for MTS:[45]

Programs that run under MTS

The following are some of the notable programs ported to MTS from other systems:[45]

MTS supports a rich set of programming languages, some developed for MTS and others ported from other systems:[45]

The lists that follow are quite University of Michigan centric. Most other MTS sites used some of this material, but they also produced their own manuals, memos, reports, and newsletters tailored to the needs of their site.

The manual series MTS: The Michigan Terminal System, was published from 1967 through 1991, in volumes 1 through 23, which were updated and reissued irregularly.[19] Initial releases of the volumes did not always occur in numeric order and volumes occasionally changed names when they were updated or republished. In general, the higher the number, the more specialized the volume.

The earliest versions of MTS Volume I and II had a different organization and content from the MTS volumes that followed and included some internal as well as end user documentation. The second edition from December 1967 covered:

The following MTS Volumes were published by the University of Michigan Computing Center[2] and are available as PDFs:[98][99][100][101]

Various aspects of MTS at the University of Michigan were documented in a series of Computing Center Memos (CCMemos)[99][104] which were published irregularly from 1967 through 1987, numbered 2 through 924, though not necessarily in chronological order. Numbers 2 through 599 are general memos about various software and hardware; the 600 series are the Consultant's Notes series—short memos for beginning to intermediate users; the 800 series covers issues relating to the Xerox 9700 printer, text processing, and typesetting; and the 900 series covers microcomputers. There was no 700 series. In 1989 this series continued as Reference Memos with less of a focus on MTS.[105][106] 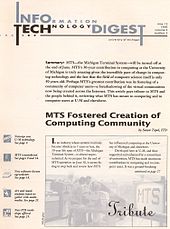 There was also introductory material presented in the User Guide, MTS User Guide, and Tutorial series, including:[99]

The following materials were not widely distributed, but were included in MTS Distributions:[19][98][100]

The last MTS distribution was D6.0 released in April 1988. It consisted of 10,003 files on six 6250 bpi magnetic tapes. After 1988 distribution of MTS components was done in an ad hoc fashion using network file transfer.

To allow new sites to get started from scratch two additional magnetic tapes were made available, an IPLable boot tape that contained a minimalist version of MTS plus the DASDI and DISKCOPY utilities that could be used to initialize and restore a one disk pack starter version of MTS from the second magnetic tape. In the earliest days of MTS the standalone TSS DASDI and DUMP/RESTORE utilities rather than MTS itself were used to create the one disk starter system.

There were also less formal redistributions where individual sites would send magnetic tapes containing new or updated work to a coordinating site. That site would copy the material to a common magnetic tape (RD1, RD2, ...), and send copies of the tape out to all of the sites. Sadly the contents of most the redistribution tapes seem to have been lost.

MTS is no longer available for license.

In its earliest days MTS was made available for free without the need for a license to sites that were interested in running MTS and which seemed to have the knowledgeable staff required to support it.

In the mid-1980s licensing arrangements were formalized with the University of Michigan acting as agent for and granting licenses on behalf of the MTS Consortium.[110] MTS licenses were available to academic organizations for an annual fee of $5,000, to other non-profit organizations for $10,000, and to commercial organizations for $25,000. The license restricted MTS from being used to provide commercial computing services. The licensees received a copy of the full set of MTS distribution tapes, any incremental distributions prepared during the year, written installation instructions, two copies of the current user documentation, and a very limited amount of assistance.

Only a few organizations licensed MTS. Several licensed MTS in order to run a single program such as CONFER. The fees collected were used to offset some of the common expenses of the MTS Consortium.