Give It Away (Red Hot Chili Peppers song)

Give It Away (Red Hot Chili Peppers song)

Infobox Single
Name = Give It Away 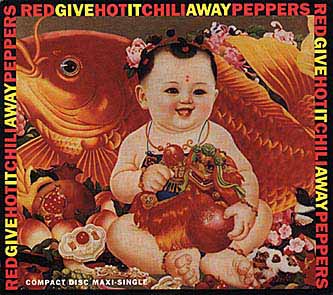 It features the members painted gold (though due to the black and white camera used in filming, the band appear silver) and dancing wildly in a desert, shot in black-and-white. The band members, otherwise scantily-clad, wear unusual clothing and eccentric hair styles.

Due to its unique peculiarity and sheer frenzied energy, the groundbreaking video, directed by , is considered by fans of the genre to be one of the greatest if not most extreme of music videos, often ranking highly in polls. Sednaoui would later direct the videos for other of the Chili Peppers' singles including "" and "Around the World". The former can be seen as a sequel of sorts, as it shows the Chilis returning to the desert, while the latter's visual style is very reminiscient of "Give It Away".

Release as a single

"Give it Away" was released on , 1991, as the first single from "Blood Sugar Sex Magik". However, despite the Chili's reputation, many radio stations refused to play the single; one station manager went so far as telling the band to bring it back to them "when they had a melody." However, L.A station began to play the song, and it quickly received hundreds of requests a day for the song.

Another concern surrounding the release was that the recently shot would be too weird to be played onto . This proved true for some while until it came to the attention of fans of the band. MTV, like KROQ, began to receive hundreds of requests a day for the video.

It is included on the band's "Greatest Hits" CD and has become an unmovable part of all their concerts, often being the last song performed (as on their "" album). It is now one of the few purely rock songs still performed live by the band. During recent performances (such as their special concert for ""), the band has begun to include a heavy, energetic intro inspired by the 1987 Public Enemy single "You're Gonna Get Yours" (the first track from their debut album ""), before segueing into "Give It Away" itself. During concerts in the era, a segment from the instrumental "Grand Pappy du Plenty" (a track on the band's self-titled debut) was often used for the song's intro.

This song is also well-remembered because of its commercial success at the time. It became the Chili Peppers' first of many #1 singles on the chart, gave them a #9 hit on the , and reached #71 on the . Although not as successful, chart-wise, as the later single "", it was quite successful in many countries.

"Give It Away" still sees regular if not occasional play on radio and music video channels. The song was also performed by an animated version of the band in the "" episode, "" (in the episode, Krusty persuades the band to alter the line "What I got, you gotta get and put it in you" to "What I'd like is I'd like to hug and kiss you"). They also performed this song live on "" on May 6, 2006, nearly 15 years after its release.

NBA Basketball player and rapper resumed the words sequence "give it away, give it away now" in his 1993 song "Shoot Pass Slam". also used the chorus of the song in the intro to his song "".

later parodied the song, along with the music video, in his 1993 single "", a tribute to the show "". (The introduction to the song and video was a parody of the band's bigger hit "".)

This song is featured in the game