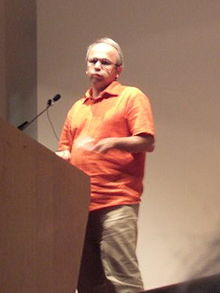 Seyyed Ebrahim Nabavi (سید ابراهیم نبوی; born 1958 in Astara, Iran) is a prolific Iranian satirist, writer, diarist, and researcher. As of 2006[update], he is the most widely known and active Iranian satirist, currently living in Belgium. He currently writes in the news website Gooya and the online newspaper Rooz, and has a satirical program for the website and broadcasts of the Amsterdam based Radio Zamaneh.

During and after studying sociology at Shiraz University and University of Tehran, but before starting his political career in Tehran, Nabavi also worked as a school teacher, and taught philosophy in the Jihad for Construction (جهاد سازندگی) effort.

Nabavi started his political career working for the Iranian dalahoo in the Ministry of Culture and Islamic Guidance, the Ministry of Interior (personally invited by Ali Akbar Nategh-Nouri), and the Islamic Republic of Iran Broadcasting (personally invited by Mohammad Hashemi). His posts include the Manager of the Political Office of the Ministry of Interior in 1361–1364 AP (ca. 1982–1985 CE). According to himself, he was chosen because of his wide political knowledge about the Iranian political issues, because of his past activities with the Office for Strengthening Unity and the Organization of Muslim Students of Shiraz University, where he had worked with Ata'ollah Mohajerani, Jamileh Kadivar, and Mostafa Moeen.

Nabavi started his satire career in the Soroush magazine in serial articles on cinema titled "andar hekāyat-e rešte va sar-r derāz va …" and continued it in the Gozaresh-e Film magazine (which he co-founded and worked as the magazine's first editor) with "rāport-hā" (reports). After leaving Gozaresh-e Film, Nabavi helped Kioumars Saberi Foumani start the Gol-Agha magazine, where he later wrote for.

Nabavi later "escaped" to Isfahan in 1996, as a reason for which he has mentioned the tighter restrictions on media imposed during the ministership of Ali Larijani and Mostafa Mirsalim in the Ministry of Culture and Islamic Guidance. In Isfahan he later became active in the presidential campaign for Mohammad Khatami, after his election he moved back to Tehran.

Nabavi became famous after starting his daily column sotūn-e panjom (Fifth Column) in the newspaper Jame'eh, which he continued in several newspapers (under different variations of the title) after the newspapers were banned one after another. He also helped Fa'ezeh Hashemi in the founding of the newspaper Zan. In August 2009 he released the video "The Confession: Ebrahim Nabavi", where "dressed in striped pajamas and wearing bandages," he "confesses to meeting with a C.I.A. agent, importing green velvet, and having affairs with celebrities ranging from Marilyn Monroe and Sophia Loren to Carla Bruni and Scarlett Johansson" in a parody of defendant confessions at the 2009 election protesters show trial in Tehran.[1] The video had over 120,000 viewings as of February 10, 2010.

He has also written several books of satire, interviews, prison diaries, and research on the history of Iranian satire. As of July 2006[update], he also writes for the online newspaper Rooz and the BBC News in Persian.