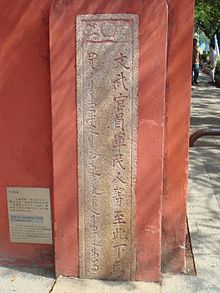 Dismounting stele at the Taiwan Confucian Temple reads: "Civil and military officials, soldiers and citizens, all dismount from their horses here"

A dismounting stele, in East Asian architecture, was a stele erected outside an important building or group of buildings giving notice for mounted travellers to dismount and for passengers of vehicles to exit the vehicle.

Dismounting steles were placed in front of gates to important buildings or institutions such as imperial tombs, palaces, the Imperial City and major temples and shrines, especially shrines to Confucius. They were placed singularly or in pairs. Whether such steles are placed in front of a particular building was dictated by rules of protocol. In imperial times, this was generally controlled by the Board of Rites. The Emperor might also grant the placement of a dismounting stele as a sign of favour towards an institution, group or person.