Kaolinite is a clay mineral, part of the group of industrial minerals, with the chemical composition Al2Si2O5(OH)4. It is a layered silicate mineral, with one tetrahedral sheet linked through oxygen atoms to one octahedral sheet of alumina octahedra.[4] Rocks that are rich in kaolinite are known as kaolin or china clay.[5]

The name is derived from Kao-ling (Chinese: 高陵/高嶺; pinyin: Gaoling), a town near Jingdezhen, Jiangxi province, China.[6] The name entered English in 1727 from the French version of the word: "kaolin", following Francois Xavier d'Entrecolles's reports from Jingdezhen.[7]

Kaolinite has a low shrink-swell capacity and a low cation exchange capacity (1-15 meq/100g). It is a soft, earthy, usually white mineral (dioctahedral phyllosilicate clay), produced by the chemical weathering of aluminium silicate minerals like feldspar. In many parts of the world, it is colored pink-orange-red by iron oxide, giving it a distinct rust hue. Lighter concentrations yield white, yellow or light orange colors. Alternating layers are sometimes found, as at Providence Canyon State Park in Georgia, USA.

Kaolin-type clays undergo a series of phase transformations upon thermal treatment in air at atmospheric pressure. Endothermic dehydroxylation (or alternatively, dehydration) begins at 550–600 °C to produce disordered metakaolin, Al2Si2O7, but continuous hydroxyl loss (-OH) is observed up to 900 °C and has been attributed to gradual oxolation of the metakaolin.[8] Because of historic disagreement concerning the nature of the metakaolin phase, extensive research has led to general consensus that metakaolin is not a simple mixture of amorphous silica (SiO2) and alumina (Al2O3), but rather a complex amorphous structure that retains some longer-range order (but not strictly crystalline) due to stacking of its hexagonal layers.[8]

Further heating to 925–950 °C converts metakaolin to a defect aluminium-silicon spinel, Si3Al4O12, which is sometimes also referred to as a gamma-alumina type structure:

A kaolin mine in Ruse Province, Bulgaria

Kaolinite is one of the most common minerals; it is mined, as kaolin, in Brazil, Bulgaria, France, United Kingdom, Iran, Germany, India, Australia, Korea, the People's Republic of China, the Czech Republic and the United States.[1]

Kaolinite clay occurs in abundance in soils that have formed from the chemical weathering of rocks in hot, moist climates—for example in tropical rainforest areas. Comparing soils along a gradient towards progressively cooler or drier climates, the proportion of kaolinite decreases, while the proportion of other clay minerals such as illite (in cooler climates) or smectite (in drier climates) increases. Such climatically-related differences in clay mineral content are often used to infer changes in climates in the geological past, where ancient soils have been buried and preserved.

In the Institut National pour l'Etude Agronomique au Congo Belge (INEAC) classification system, soils in which the clay fraction is predominantly kaolinite are called kaolisol (from kaolin and soil).[9]

Kaolin is used in ceramics, medicine, coated paper, as a food additive in toothpaste, as a light diffusing material in white incandescent light bulbs, and in cosmetics. It is generally the main component in porcelain.

It is also used in paint to extend titanium dioxide (TiO2) and modify gloss levels; in rubber for semi-reinforcing properties; and in adhesives to modify rheology.[10]

Kaolin was long used in the production of common smoking pipes in Europe and Asia.

The largest use is in the production of paper, including ensuring the gloss on some grades of paper. Commercial grades of kaolin are supplied and transported as dry powder, semi-dry noodle or as liquid slurry.

Kaolinite can contain very small traces of uranium and thorium, and is therefore useful in radiological dating. While a single magazine made using kaolin does not contain enough radioactive material to be detected by a security-oriented monitor, this could result in the possibility of a truckload of glossy paper occasionally tripping an overly-sensitive radiation monitor.[11]

Kaolinite has also seen some use in organic farming, as a spray applied to crops to deter insect damage, and in the case of apples, to prevent sun scald.

In April 2008, the US Naval Medical Research Institute announced the successful use of a kaolinite-derived aluminosilicate nanoparticle infusion in traditional gauze, known commercially as QuikClot Combat Gauze.[12]

When heated to between 650 and 900 °C kaolinite dehydroxylates to form metakaolin. According to the American National Precast Concrete Association this is a supplementary cementitious material (SCM). When added to a concrete mix, metakaolin affects the acceleration of Portland cement hydration when replacing Portland cement by 20 percent by weight.

In ceramics applications, the formula is typically written in terms of oxides, thus the formula for kaolinite is Al2O3·2SiO2·2H2O

Using the cement chemist notation this can be even written as AS2H2, with the oxides represented as A = Al2O3, S = SiO2, H = H2O.

Kaolinite was also used as filler in Edison Diamond Discs.[13] 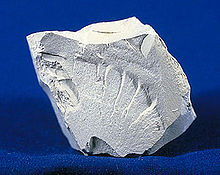 A folk medicine use is to soothe an upset stomach, similar to the way parrots (and later, humans) in South America originally used it.[14] More recently, industrially-produced kaolinite preparations were formerly common for treatment of diarrhea; the most common of these was Kaopectate, which abandoned the use of kaolin in favor of attapulgite and then (in the United States) bismuth subsalicylate.

In Africa, kaolin is sometimes known as kalaba (in Gabon[15] and Cameroon[16]), calaba, and calabachop (in Equatorial Guinea). It is used for facial masks or soap[17] and is eaten for pleasure or to suppress hunger,[16] a practice known as geophagy. Consumption is greater among women, especially during pregnancy.[18]

This practice is also seen among black women in the Southern United States, especially Georgia.[19] There, the kaolin is called white dirt, chalk or white clay.[19]