CMSD is the only district in Ohio that is under direct control of the mayor, who appoints a school board. The Cleveland district is the largest PreK-12 district in the state, with a 2006-2007 enrollment of 55,567 students. The mayor was given control of the city schools after a series of elected school boards were deemed ineffective by city voters. The school board appoints a chief executive officer, the equivalent of a district superintendent, who is responsible for district management.

In 2009 Cleveland Schools had the nations third highest high school dropout rate and graduation rate following Detroit with the number one spot.[citation needed]

Dr. Eugene Sanders became Cleveland's school chief on July 1, 2006.[2] Sanders experienced success in his previous role as Superintendent of the Toledo Public Schools (of Toledo, Ohio). Sanders was chosen after a nationwide search produced several candidates for the position, some of which later were disqualified or withdrew candidacy due to personal and professional problems. Sanders announced his retirement, effective February 2011, in December 2010.[3]

In response to declining enrollment over the past decade and the corresponding growth in charter schools in the city, the District took several steps to improve academic performance and increase graduation rates. In the 2007–08 school year, the District changed its name to the Cleveland Metropolitan School District to attract students throughout the region.[4]

The system passed a $1.2 billion school building construction/replacement bond issue, but has repeatedly failed to pass an operating levy. In 2005, the system faced large budget shortfalls and the possibility of slipping back into "academic emergency" as rated by the Ohio Department of Education. CMSD's latest test scores show modest improvement in writing and math scores, and a slight regression in reading scores. The district has improved its graduation rate over the last few years, increasing it from 39.5% in 2002 to over 50% of students graduating in 2004.[citation needed]

The Chairman of the Board of Education is Robert M. Heard Sr., who was appointed July 1, 2007 by Mayor Frank G. Jackson. 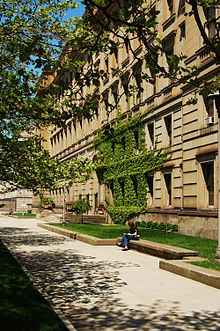 The Cleveland Board of Education Building in downtown Cleveland

Cleveland was hit hard in the 1960s and early 1970s by white flight and suburbanization. While the city's total population declined, Cleveland Public Schools' enrollment had increased: 99,686 in 1950, and 134,765 in 1960, and 148,793 in 1963.[5] Cleveland Public Schools financially struggled with a growing student population, and a declining tax base due to regional industrial decline and depopulation of the metropolitan and urban areas in favor of the suburbs.[5][6]

On December 12, 1973, the National Association for the Advancement of Colored People's Cleveland Chapter filed suit, Reed vs. Rhodes,[7][8] against the Cleveland Board of Education in Cleveland's United States District Court for the Northern District of Ohio to racially integrate Cleveland Public Schools,[9] claiming that the public schools were at least partly at fault for Cleveland's housing segregation into ethnic neighborhoods. Between August 31, 1976[8] and 1984, Chief United States District Judge Frank J. Battisti issued over 4,000 court orders including implementation of forced-busing of Cleveland Public Schools,[5] the case was appealed to the 6th Circuit Court of Appeals, which by 23 Aug. 1979 upheld Battisti's earlier orders,[7] and was later upheld on appeal by the Supreme Court of the United States. From 1970 to 1980, Cleveland experienced a 24% decline in population (from 751 thousand to 574 thousand),[6][10] which was part of a longer-term on-going trend from 1950 to 2000.[6]

Demographia estimates that Cleveland's 1980 population would have been 5% higher (606 thousand) without mandatory busing.[10]

Mandatory busing was one of several factors which sped up the migration from out of Cleveland by those who could afford to.[10] The administrative and operational expense of complying with mandatory busing and other federal court orders caused a dramatic increase in overhead expenditures per student, while declining tax revenues resulted in lower expenditures on actually educating public school students.[5]

In 1996, Martin Hoke, Cleveland's 10th. District United States House Representative was quoted: "Children are now bused from a predominantly black school on the east side of town to a predominantly black school on the west side of town. More than half a billion dollars[11]A[›] has been spent on desegregation activities since 1978-money that could have been used to buy textbooks, upgrade science laboratories or purchase new computers. When kids attend schools miles away from their homes, what working parent is able to attend sporting events, parent-teacher conferences, and home-room parties? Busing has contributed significantly to the decline of our urban centers."[12]

The combination of many factors resulted in declining enrollments.[5] Before mandatory busing, in 1976, minority enrollment in Cleveland Public Schools was 58%, by 1994 it was 71%. By 1996, Cleveland Public Schools total enrollment was half of what it was pre-mandatory busing.[11] In 1991, Ohio had a new proficiency test for 9th grade students, which the majority of Cleveland Public Schools students did not pass.[5] By 1994, almost 50% of the system's students were failing to graduate from high school.[5] Meanwhile, many graduates did not qualify for entry-level jobs,[5] with many employers increasingly requiring secondary or post-secondary degrees [5] due to more information technology-related jobs and other changes in the overall economy.

In March 1994, the National Association for the Advancement of Colored People's Cleveland Chapter, Reed vs. Rhodes plaintiff, challenged the fairness of the Ohio 9th. grade proficiency test as an Ohio secondary school graduation requirement for African-American students;[13] the subsequent federal court settlement agreement(s) left the 9th grade secondary school graduation requirement intact and unchanged in 1994 and subsequently.[13] Prior to mandatory busing, Cleveland Public Schools graduation rate was 75 percent, by 1996 it had dropped to 26.6 percent.[11] Although mandatory busing ended in the 1990s, Cleveland continued to slide into poverty, reaching a nadir in 2004 when it was named the poorest major city in the United States.[14] Cleveland was again rated the poorest major city in the U.S. in 2006, with a poverty rate of 32.4%.[15]

"Growth schools," the highest-rated group, will stay as is while gaining some extra freedom in management. "Refocus schools," are improving and will get added attention—for example, leadership training—to help continue their progress. "Repurpose schools," which face staff changes or conversion to charters to give them a jolt. The remaining schools will close, with students transferred to neighboring facilities unless they take advantage of citywide open enrollment. "Monitor closely schools," are those schools that will not be placed in a group until the 2011-2012 school year.[16]

Prior to 1998 the school board was elected. Since that time the board has been appointed by the Mayor.

History of the Gifted and Talented (Major Work) Program In October 1921, the Cleveland Public School System began its first program for gifted children at Denison Elementary School where gifted children in grades four, five, and six participated. This program was supported by the Women’s City Club of Cleveland. From 1921 to 1927, fourteen elementary and two junior high schools were established as centers for gifted children. In the decades of the 1940s and 1950s, the Cleveland Public Schools developed and articulated a program for gifted pupils from the primary grades through high school. Thus, from a modest beginning, the program, which at one time was called the “greatest experiment in education,” has grown and developed into a program that currently provides enriching educational experiences for over 2,500 children with high intellectual and/or academic ability.

Overview of the Gifted Education Program in CMSD

The Gifted Education Program in the Cleveland Metropolitan School District consists of the ‘Major Work’ Program, currently in grades 2-8, and the Honors and Advanced Placement (AP) Programs in grades 9-12. There are seven PreK-8 Schools, one Grades 2-12 School, and five Grades 9-12 Schools that service gifted identified children. The AP courses vary amongst high schools.

Applications are also accepted by building administrators, guidance counselors, teachers, parents, and peers of the student being nominated. To request an application, please call the Gifted Education Office.

All teachers instructing in gifted classrooms grades 2-6 are licensed in gifted education. Teachers in grades 7-12 hold their gifted endorsement and/or are highly qualified in the content area in which they teach.

Children in the gifted program follow the same grade level content standards as their general education peers. However, there are components to the gifted program that differ. To name a few, children engage in Research Talks, Weekly Forums, Experiential Learning, and Socratic Seminars.

In order to maintain academic rigor and the social-emotional well-being of our gifted children, parent involvement is a major component of our program. Our Family Interactive Programs are seasonal celebrations open to all of our students and their families and scheduled four times each year. A parent core group also meets periodically to discuss programmatic issues at the individual school sites.[17]

Gifted Coded Students feed into these High Schools unless they apply to another special program or thematic school:

(Courses vary from school to school; check with the Guidance Counselor of each individual school for course offerings):

All gifted, honors and/or advanced placement courses taken are weighted on a 5-point scale.

The district requires all kindergarten through 8th grade student to wear school uniforms; this rule began in 2008. High schoolers are required to adhere to a strict dress code.[18] In February 2009 the school board voted in favor of a rule stating that high schoolers need to wear uniforms.[19]

In the 2009-2010 school CMSD introduced its new report card and progress report system. The new report cards were reduced from four pages to one page in high schools, and from four to six - eight pages for students in grades 1-8, but offered less information about students progress. Teachers, Principal, and Teacher Union Officials complained about the new system arguing teachers had to wake up at 3AM to enter grade because the system was kicking them and not allowing them to enter grades at reasonable times. Principals had problems printing report cards and saving grades. Parent and students felt the report cards showed very little information compared to the older versions. The new system was said to be sponsored by Sungard.