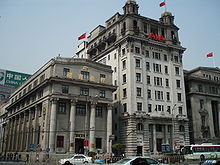 The North China Daily News Building on the right

North China Daily News Building (Chinese: 字林大樓; pinyin: Zìlín Dàlóu) is a historical Neo-Renaissance-style office building on the Bund in Shanghai, China. It is located at Number 17, East Zhongshan No.1 Road, and currently[update] houses the offices of the American International Assurance (AIA) and is thus often called the AIA Building (友邦大廈, Yǒubāng Dàshà). At the time of its opening in 1924, it was the tallest building in Shanghai.

Construction began in 1921 on a building for the North China Daily News, an English-language newspaper based in Shanghai. The structure, built by Lester, Johnson & Morriss (德和洋行, Déhé Yángháng), a firm co-founded by Gordon Morriss (馬立師, Mǎlìshī), brother of the newspaper's owner Henry E. Morriss (馬立斯, Mǎlìsī), was completed in June 1923 and dedicated on 16 February 1924. In addition to the offices of the newspaper on several floors, the building also housed American Asiatic Underwriters an insurance agency founded by Cornelius Vander Starr and forerunner of the American International Group (AIG) from 1927.

During the Japanese occupation of Shanghai during the Second Sino-Japanese War (World War II), the building was home to the Tairiku Shimpō (大陸新報), a Japanese newspaper.

The North China Daily News Building is a reinforced concrete structure with granite outer walls with both Neoclassical and Renaissance stylings. The building contains 9043 m² and lies on a 1043-m² plot of land.