Condorito is a comic strip that features an anthropomorphic condor living in a fictitious town named Pelotillehue — a typical small Chilean provincial town. He is meant to be a representation of the Latin American people.

Condorito was created by the Chilean cartoonist René Ríos, known as Pepo. In spite of his Chilean origin, Condorito is very popular throughout Latin America, where the character is considered part of the general popular culture, and has a growing readership in the United States as well[citation needed]. Condorito and his friends appear in a daily comic strip.

The structure of Condorito is very simple: each page is an independent joke, without any continuity with others (though some jokes are larger or shorter than one page). The jokes are often sexist or male chauvinistic in nature, and some of the details included in the artwork are gender-dependent, but the humor is usually couched in double-entendres that children would be unlikely to understand.

One peculiar characteristic of Condorito is that the character that goes through the embarrassing moment and/or serves as the butt of the joke in a given strip almost always falls backwards to the floor (legs visible or out of frame) in the final panel, although new comic strips have now put the victim of the joke looking at the reader instead. This classic comic strip "flop take" is accompanied by a free-fall onomatopoeic sound (usually ¡Plop!). From time to time, this is replaced by the victim of the joke saying ¡Exijo una explicación! ("I demand an explanation!"), usually as a twist or downbeat ending. 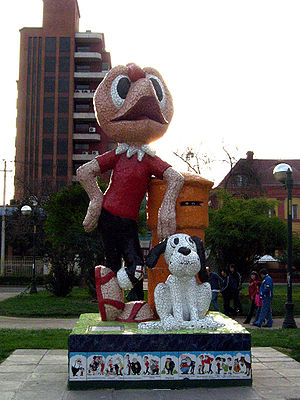 A statue of "Condorito" and "Washington" in San Miguel (Santiago, Chile).

Condorito has done many parodies of well-known characters. Generally these parodies have several pages dedicated to a story.

The first Condorito collection, published in Chile in 1955

In 1942, the Walt Disney Company created the animated film Saludos Amigos depicting Donald Duck and a cast of anthropomorphic characters representing various nations of the Americas. In the film, while the Disney characters are represented as humorous versions of charros, gauchos, etc., Chile was represented as Pedro, a small airplane engaged in his very first flight, whose attempt to fly over the Andes to pick up air mail from Mendoza is humorously depicted. Pepo created Condorito in response to what he perceived as a slight to the image of Chile.

Condorito through the 1960s and 1970s held to a conservative perspective on Chile and its society, poking fun at both the new left-wing poets and the hippies. At the first age of the comic, the jokes usually have a very basic context and themes, like African people always represented as primitive cannibals, women as bad drivers or as a jealous wife waiting her husband coming back from a party, etc.

After the military coup of 1973, some Chilean cartoonists were censored by the military regime, yet unlike other publications (such as the Argentinian Mafalda), which combined criticism of society with humor, Condorito, which lacked the former, continued to be published. Since that time, many Chilean comics with a political view on society (e.g. Hervi's Super Cifuentes) have been forgotten. Condorito remains the best-known Chilean comic book character.