The Book of the Long Sun

The Book of the Long Sun 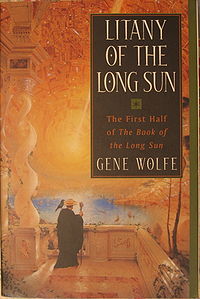 The saga begins with the attempt of Silk, a young priest, to save his manteion (the equivalent of a neighborhood church and school) from being destroyed by a ruthless crime lord. Silk soon, however, becomes a revolutionary leader and prophet as he learns more about his world (a vast generation ship called the whorl): its origins and fate, and the nature of the pantheon of gods he worships. Silk soon learns to distrust those gods and grows to revere the supposedly minor god known as The Outsider, who has provided him with enlightenment.

Histories of the main characters

Patera Silk begins the tetralogy as the 23-year-old Augur of the Sun Street Manteion, arguably the poorest manteion in Viron. Augurs, in the religion of Silk's city, Viron, sacrifice animals to the gods, and examine the entrails of these sacrifices to seek knowledge about the future of the person who has provided the sacrifice, and the future of the augur. He believes himself to be "enlightened" by a minor deity known as the Outsider, who charges Silk to save his manteion, which has been sold to the crime lord Blood for tax reasons. His quest to save the manteion starts him on a journey into Viron's underworld. In the first book in the tetralogy, Nightside the Long Sun, Silk begins to question his own moral fiber as he engages in various "immoral" acts for the sake of this quest.

His theophanies continue, and Patera Silk eventually develops a large following because of his continued contact with the gods of Viron. He becomes a popular hero, and with the help of a spy named Doctor Crane, he is elevated to the political position of Caldé, the high administrator of Viron. It is later discovered that Patera Silk is the rightful heir to this position, having been secretly named successor by the previous Caldé, Tussah (Silk's adoptive father), before he was assassinated by the oligarchical councilors of the Ayuntamiento, another governing body of Viron.

Silk eventually marries the ex-prostitute Hyacinth and journeys with Auk to the city Mainframe, where the whorl's main computer is housed. During this trip he goes through a brief suicidal crisis, and comes to final conclusions about the moral doubts that he possessed during the earlier parts of the series.

When The Book of the Long Sun concludes, Patera Silk's fate is unknown.

Silk is an allegorical character, as is typical for Wolfe's work. He is often associated with Moses.

Maytera Marble is a chemical citizen of Viron, or a "chem." This means that she is a robot who possesses a self-aware, sentient mind. Maytera Marble was initially designed to be a maid, but as her life progressed she found a more religious calling and became one of the Sibyls at Patera Silk's Sun Street Manteion. Being over three hundred years old, certain body parts of hers have been replaced and others have worn away. At the beginning of the tetralogy, her functions have so decayed that she can no longer remember her precise age. Marble is Silk's main confidante at the manteion, Maytera Rose being too harsh for him and Maytera Mint initially too shy.

Later in the series she reclaims several prosthetic parts from the dead Sibyl Maytera Rose, which causes her to obtain some of Rose's memories, resulting in an identity crisis of sorts.

Maytera Marble eventually claims that her real name is Molybdenum, with the short nickname Moly, so that she can marry the soldier Hammerstone and begin constructing a daughter. Evidently she was originally a maid at the manteion and the death of a sibyl necessitated that she take vows. Patera Quetzal releases her from her service so that she can be wed to Corporal Hammerstone. However, as predicted by Silk, she later reveals that her name is in fact Maggie, or Magnesia, and she lied about being Moly so that Hammerstone would marry her.

Maytera Mint is one of the sibyls of the Sun Street manteion. Initially rather shy, her concern starts the relationship between Patera Silk and the sneak-thief Auk. She is eventually inhabited by a piece of the deity Kypris, goddess of love. Kypris does not completely possess Maytera Mint, and the incomplete personality transfer gives Maytera Mint a newfound assertiveness.

At the funeral sacrifice for Maytera Rose, Maytera Mint presides over the sacrifices because Patera Silk has not yet returned from being captured by the Ayuntamiento. There is a theophany, during which the queen goddess Echidna appears and proclaims Mint to be her "sword" in the revolution against the Ayuntamiento. Leading a band of dissatisfied citizens, she becomes General Mint in Silk's army, facing off against the City Guard and eventually Viron's force of chem "soldiers."

Auk is introduced as a friend of Maytera Mint's from the manteion who needs spiritual guidance. When Silk speaks with him, he discovers that Auk is a criminal and involved with the prostitute Chenille. Auk counsels Silk on how to break into Blood's mansion. Later, Auk travels in the tunnels under Viron with Chenille, seeking Silk, and suffers a wound to the head. The god Tartaros enters Auk's mind and fixes the damage to his brain, making Auk a prophet of Tartaros in the process. Tartaros guides Auk out of the tunnels and eventually instructs him in guiding people to leave the whorl. When Patera Silk and his retinue travel to Mainframe, the home of the gods, Auk takes a landing craft that heads away from the Whorl.

Blood: The crime lord who purchases Silk's manteion. Blood is later killed by Silk during the uprising that makes Silk into the Caldé.

Musk: Musk is Blood's lover and an amateur falconer. He is killed during Maytera Rose's funeral sacrifice, when he attacks Patera Silk.

Doctor Crane: Doctor Crane is a spy from the city of Trivigaunte. He masquerades as Blood's personal physician. He is killed during a mistaken 'rescue attempt.'

Chenille: a prostitute, and friend of Auk. She is susceptible to possession by the gods. There are strong suggestions that she was born from a frozen embryo chosen for this special ability.

Corporal Hammerstone: Hammerstone is a low-level Soldier in Viron's chem Army. He tells tales of his lost love Moly, or Molybdenum. Maytera Marble later impersonates Moly to marry Hammerstone. He is reprogrammed by Patera Incus to turn against the Ayuntamiento.

Maytera Rose: one of the sibyls of the Sun Street manteion, she is a cyborg and the mother of Blood.

Hyacinth: a beautiful courtesan/prostitute, first seen by Silk when he invades Blood's mansion. He falls in love, and she becomes Silk's wife.

Mucor: A strange girl who has little interaction with other humans, but who has an amazing ability - she can remotely project her consciousness into other people, and speak with their voices, and gain information from them, while inhabiting them. She is mentally ill and anorexic, partly due to a botched brain surgery attempting to remove her power. Like Chenille, she was also a frozen embryo chosen for special genetic traits (i.e. this ability to possess others).

Patera Quetzal: The leader of Silk's religion in the city of Viron. There are hints throughout the books that he is not human, but this isn't known to the other characters until he dies, in the last book, and it is revealed that he is an inhumu.

Horn: a teenage student at the Sun Street manteion who is close to Silk, he appears only briefly in the books. At the end, he and his wife, Nettle, are said to be the authors.

Oreb: a large black bird, of the kind known as a night chough. Oreb is intelligent, and can talk, although he can only make two-syllable sentences (e.g. "No cut!", "Bad cat!") which usually need interpretation. Oreb was originally purchased by Silk as an animal sacrifice but fell sick and was later kept as a pet. He is usually with Silk, but can and does leave at times.