Kabaddi
Not to be confused with Kabadi in Hindi, meaning a junk or scrap dealer, Kabadi Wala. 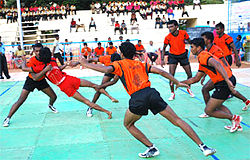 Two teams, occupy opposite halves of a field and take turns sending a "raider" into the other half, in order to win points by tackling members of the opposing team; the raider then tries to return to his own half, holding his breath and chanting "kabaddi, kabaddi, kabaddi" during the whole raid.

In the international team version of kabaddi, two teams of seven members each occupy opposite halves of a field of 10m × 13m in case of men and 8m X 11m in case of women.[1] Each has three supplementary players held in reserve. The game is played with 20 minute halves and a five minute halftime break during which the teams exchange sides.

Teams take turns sending a "raider" to the opposite team's half, where the goal is to tag or wrestle ("confine") members of the opposite team before returning to the home half. Tagged members are "out" and temporarily sent off the field.

Meanwhile, defenders must form a chain, for example, by linking hands; if the chain is broken, a member of the defending team is sent off. The goal of the defenders is to stop the raider from returning to the home side before taking a breath.

The raider is sent off the field if:

Each time a player is out the opposing team earns a point. A team scores a bonus of two points, called a lona, if the entire opposing team is declared out. At the end of the game, the team with the most points wins.

Matches are categorised based on age and weight. Six officials supervise a match: one referee, two umpires, a scorer and two assistant scorers.

In the 'Amar' form of Kabaddi, whenever any player is touched (out), he does not go out of the court, but stays inside, and one point is awarded to the team that touched him. This game is also played on a time basis, i.e. the time is fixed. This form of kabaddi is played in Punjab, Canada, England, New Zealand, USA, Pakistan and Australia. In the Amar form of Kabaddi, each team consists of 5–6 stoppers and 4–5 raiders. At one time, only 4 stoppers are allowed to play on the field. Every time a stopper stops the raider from going back to his starting point, that stoppers team gets 1 point. On the other hand, every time the raider tags one of the stoppers and returns to his starting point, his team gets one point. At one time, only one of the stoppers can try.

In Sanjeevni Kabaddi, one player is revived against one player of the opposite team who is out, one out, one in. The duration, the number of players, dimensions of the court, etc. have been fixed by the Kabaddi Federation of India. This form of Kabaddi is the closest to the present game. In this form of Kabaddi, players are put out and revived and the game lasts 40 minutes with a 5-minute break in between. There are nine players on each side. The team that puts out all the players on the opponent's side scores four extra points for a 'Iona'. The winning team is the one that scores most points after 40 minutes. The field is bigger in this form of Kabaddi and the 'chant' different in various regions. Modern Kabaddi resembles this form of Kabaddi especially with regard to 'out & in system' and 'Iona'. The present form of Kabaddi is a synthesis of all these forms with changes in the rules.[2][3]

This is played with nine players on either side, in a field of no specific measurements. The characteristic is that a player put out has to remain out until all his team members are out. The team that is successful in putting out all the players of the opponent's side secures a point. This is akin to the present system of 'Iona'. After all the players are put out, the team is revived and the game continues. The game continues until five or seven 'Iona' are secured. This form of Kabaddi has no fixed game time. The main disadvantage of Gaminee is that the player is not in position to give his best performance since he is likely to remain out for the better part of the match until an Iona is scored.[2][3]

Modern Kabaddi is a synthesis of the game played in various forms under different names.[2] Kabaddi received international exposure during the 1936 Berlin Olympics, demonstrated by Hanuman Vyayam Prasarak Mandal, Amaravati, Maharashtra. The game was introduced in the Indian Olympic Games at Calcutta in 1938. In 1950 the All India Kabaddi Federation came into existence and compiled standard rules. The Amateur Kabaddi Federation of India (AKFI) was founded in 1973. After formation of the Amateur Kabaddi Federation of India, the first men's nationals were held in Madras (re-named Chennai), while the women's were in Calcutta (renamed Kolkata) in 1955.The AKFI has given new shape to the rules and has the right to modify them. The Asian Kabaddi Federation was founded under the chairmanship of Mr. Janardan Singh Gehlot.

The first men's kabaddi nationals championship on Mat and indoor Stadium were held in Pune and this championship Organiz by BADAMI HAUD SANGH Pune. Kabaddi was introduced and popularized in Japan in 1979. The Asian Amateur Kabaddi Federation sent Prof. Sundar Ram of India to tour Japan for two months to introduce the game.

In 1979, a return test between Bangladesh and India was held at different places of India including Mumbai, Hyderabad, and Punjab. The Asian Kabaddi Championship was arranged in 1980 and India emerged as champion and Bangladesh runner-up. Bangladesh became runner-up again in 1985 in the Asian Kabaddi Championship held in Jaipur, India. The other teams in the tournament were Nepal, Malaysia and Japan. The game was included for the first time in the Asian Games in Beijing in 1990. India, China, Japan, Malaysia, Sri Lanka, Pakistan and Bangladesh took part. India won the gold medal and has also won gold at the following six Asian Games in Hiroshima in 1994, Bangkok in 1998, Busan in 2002, Doha in 2006 and Guangzhou in 2010.

An attempt to popularise kabaddi in Great Britain was carried out by Channel 4, who commissioned a programme dedicated to the sport. The show, Kabaddi in the early 1990s, however, failed to capture viewer attention despite fixtures such as West Bengal Police versus the Punjab. Kabaddi was axed in 1992, but not before its presenter Krishnan Guru-Murthy suffered a collapsed lung while participating in the sport.[5][non-primary source needed] Alt-rock band The Cooper Temple Clause formed a kabbadi team in 2001 and were, at one stage, ranked seventh in the British domestic standings.[6][non-primary source needed]

In the 1998 Asian games the Indian Kabaddi team defeated Pakistan in a thrilling final match at Bangkok (Thailand). The chief coach of the team was former kabaddi player and coach Flt. Lt. S P Singh.

Kabaddi is one of the national games in Iran and it is a very popular game in from childhood to adults. In Iran there are different names that they call this game according to the area. In some areas - especially in the center of Iranian plateau, Khorasan and Mazandaran Kabaddi is known as Zu/Zou (Persian: زو), in Gilan as Do-Do (Persian: دودو), in Khuzestan as Ti-Ti (Persian: تی‌تی) and in Sistan and Baluchestan as Kabaddi/Kabedi/Kavedi/Kaveddi/Kavaddi (Persian: کودّی، کبدی).[8][9]

Kabaddi is a very popular game in Bangladesh, especially in the villages. Often called the 'game of rural Bengal', it is now the National Game of Bangladesh. In some areas Kabaddi is still known as Ha-du-du, but Ha-du-du had no definite rules and was played with different rules in different areas. Ha-du-du was renamed Kabaddi and given the status of the National Game in 1972.

The Bangladesh Amateur Kabaddi Federation was formed in 1973. It framed rules and regulations for the national game. In 1974 Bangladesh played a Kabaddi test match with a visiting Indian team, which played test matches with the district teams of Dhaka, Tangail, Dinajpur, Jessore, Faridpur and Comilla. In 1978, the Asian Amateur Kabaddi Federation was formed at a conference of delegates from Bangladesh, India, Nepal and Pakistan in the Indian town of Villai.

In 1979, a return test between Bangladesh and India was held at different places of India including Mumbai, Hyderabad, and Punjab. The Asian Kabaddi Championship was successfully arranged in 1980 and India emerged as the champion and Bangladesh as the runners-up. Bangladesh became runners-up again in 1985 in Asian Kabaddi Championship held in Jaipur, India. The other teams included in the tournament were Nepal, Malaysia and Japan. Kabaddi was played as a demonstration sport at the 1936 Summer Olympics in Berlin. The game was included for the first time in Asian Games held in Beijing in 1990. Eight countries took part including India, China, Japan, Malaysia, Sri Lanka, Pakistan and Bangladesh. India won the gold medal and has since won gold at the following three Asian Games in Hiroshima in 1994, Bangkok in 1998,Busan in 2002,and in Doha 2006. Kabaddi is popular throughout South Asia, and has also spread to Southeast Asia, Japan and Iran. It is the national game of Bangladesh where it is known as Haḍuḍu. It is the state game of Punjab, Karnataka, Tamil Nadu, Andhra Pradesh, and Maharashtra in India. It is played by the British Army for fun, to keep fit and as an enticement to recruit soldiers from the British Asian community. The game is also played extensively in the small town of Peebles in the Scottish Borders, mainly in the local primary school playground, where it is favoured to more traditional childhood past-times such as 'British bulldogs' and 'Kiss, Cuddle and Torture'.

Kabaddi has spread in North America in Canada and the United States of America and West Indies kabaddi team which represents few Caribbean nations.

Kabaddi is a part of Asian Games from 1990 Asian Games in Beijing in People's Republic of China. This game has spread widely in Asia having 19 of 31 members in the International Kabaddi Federation. People's Republic of China and Vietnam have participated in 1990 Asian Games and 2009 Asian Indoor Games respectively are not members of International Kabaddi Federation. Hence there 21 nations in Asia who have participated in this game which nearly make 2/3 of total nations playing this game.

8 nations so far have been registered by International Kabaddi Federation from Europe.

Australia is the only nation who has played in Kabaddi Tournaments from Oceania and is member of International Kabaddi Federation.

This section has teams that have participated in Kabaddi Tournaments but have not been registered by International Kabaddi Federation.

There are two non-members from Asia, i.e. People's Republic of China and Vietnam.

Women's Kabaddi was first introduced in 2010 Guangzhou Asian Games. India won gold and Thailand were runner up with silver. Bangladesh and Iran were knock out in semi-finals and shared bronze.

Kabaddi World cup was first played in 2004 and then in 2007 and 2010. So far India is the unbeaten champion in Kabaddi World Cup. Iran is the next most successful nation being twice runner-up. Pakistan was the runner-up in 2010.

Participation of nations in the Kabaddi world cup so far is as follows:-