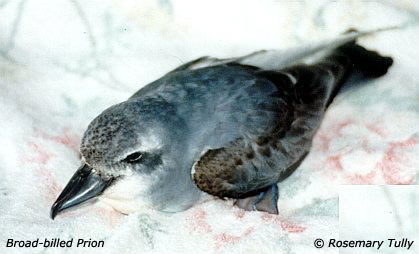 They are found in the and breed on a number of subantarctic islands. Prions grow 20-27 cm long, and have blue-grey upperparts and white underparts. Three species of prion have flattened bills with a fringe of lamellae that act as strainers. All prions are marine and feed on small such as s, s, decapods, and , as well as some such as s and s.

In addition, remains of some hitherto undescribed prehistoric species have been found. The oldest is from the (, some 12-7 million years ago) of the in .

* [http://news.bbc.co.uk/2/hi/science/nature/3961069.stm Antarctic Prion homes on their life mate through smell]