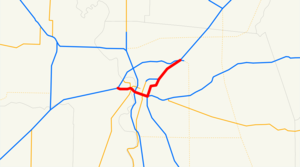 Interstate 80 Business, called the Capital City Freeway in its entirety, is a of Interstate 80 through . As it is state-maintained, unlike most s in California, it is assigned route numbers - part of U.S. Route 50 on its western half (5.64 miles/9.08 km), and unsigned State Route 51 on its eastern half (8.86 miles/14.26 km). The full road is a , and carried Interstate 80 until 1981, when the signage and designation of Interstate 80 was transferred to the Beltline Freeway, previously signed as Interstate 880. At that time, the (AASHTO) assigned the Interstate 305 designation to the west half, which met . However, the (Caltrans) has never signed this number, put it on any road signs, or used it internally. (Note: The lists unsigned I-305 as 8.44 miles (13.58 km), [ [http://www.fhwa.dot.gov/reports/routefinder/table2.htm Auxiliary Routes of the Dwight D. Eisenhower National System Of Interstate and Defense Highways as of October 31, 2002] ] increased from 5.3 miles (8.5 km) in 1999. [ [http://www.kurumi.com/roads/3di/i305.html#305ca Kurumi.com: I-305 California] ]

In downtown West Sacramento, Business 80 and US 50 split from the West Sacramento Freeway, which is now locally maintained over the Tower Bridge, but once carried State Route 275. Business 80 crosses the on the Pioneer Memorial Bridge, intersecting with Interstate 5 on the east bank. State Route 99 once ran along I-5 to the north and Business 80 to the east, but this is now signed TO SR 99. After crossing I-5, Business 80 runs on top of an embankment between W and X Streets; this was originally known as the WX Freeway.

The North Sacramento Freeway, originally a portion of U.S. Route 40, merges with the Elvas Freeway and continues north to Marconi Avenue. This portion of Interstate 80 was at one time designated to be bypassed by a newer version of Interstate 80, but that planned route along the western side of the Southern Pacific railroad tracks was cancelled by the City of Sacramento. The North Sacramento Freeway becomes the Roseville Freeway at the curve north of Marconi Avenue(Marconi Curve) (where the freeway once ended at Auburn Boulevard). At the east end of Business 80, the Roseville Freeway continues northeast to Roseville as Interstate 80, while the short unsigned State Route 244 heads east to Auburn Boulevard. I-80 heads west around the north side of Sacramento; the built portion of the never completed North Sacramento Freeway replacement, in the median of I-80, now serves as parking and access for the northernmost three stations (Watt/I-80, Watt I-80 West, and Roseville Road) on the 's Blue Line.

Business 80 was part of Interstate 80 until the early 1980s, with the actual signage change occurring in 1983. The replacement for the was cancelled in 1978, and in 1979 the removed it from the , redesignating the west half of the Capital City Freeway (which met Interstate Highway standards) as I-305. The east half was designated 51. The next year, the extended U.S. Route 50 west to cover the west half of old I-80, and the east half was assigned the new SR 51 number (last used in 1965 for a short route in Orange). (The Interstate 880 designation, which had been used for the Beltine Freeway, was reused in 1984 for the Nimitz Freeway in the east bay communities of the .)

The old I-80 was never signed as US 50 (alone) or SR 51, but as a . Unlike most business routes in California, which run along locally-maintained streets through a downtown area, Business 80 was not assigned to the pre-freeway alignment of U.S. Route 40, but to a freeway. The existence of two freeways, both numbered 80, has caused some confusion, and in 1996 the full route was given the Capital City Freeway name. This name appears on overhead signs at prominent interchanges.

Business 80 is referred to as Business 80, Biz 80, Capital City Freeway, and US 50 (western section only) by residents and mapmakers. Caltrans does not normally use the Business 80 designation, except for signage and other related concepts like s (which are continuous along the business loop). Caltrans refers to the western half as US 50 and the eastern half as SR 51 for traffic condition reporting. The Caltrans traffic camera system refers to the route by its name, Capital City Freeway.

The SR 99 concurrency is not officially designated by Caltrans, but mapmakers often show it as such. SR 99 signage had existed along that route for motorists' convenience, but was removed in 2000, and replaced by TO SR 99 signs instead.