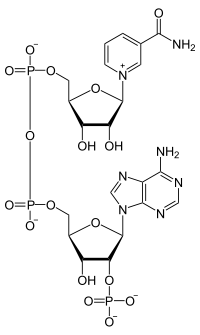 The NADPH oxidase (nicotinamide adenine dinucleotide phosphate-oxidase) is a membrane-bound enzyme complex. It can be found in the plasma membrane as well as in the membrane of phagosome.

It is made up of six subunits. These subunits are:

Under normal circumstances, the complex is latent in neutrophils and is activated to assemble in the membranes during respiratory burst.

It generates superoxide by transferring electrons from NADPH inside the cell across the membrane and coupling these to molecular oxygen to produce the superoxide, which is a reactive free-radical. Superoxide can be produced in phagosomes, which contain ingested bacteria and fungi, or it can be produced outside of the cell. In a phagosome, superoxide can spontaneously form hydrogen peroxide that will undergo further reactions to generate reactive oxygen species (ROS).

Superoxide is capable of killing bacteria and fungi by mechanisms that are not yet fully understood (see article on superoxide), but may inactivate critical metabolic enzymes, initiate lipid peroxidation, and liberate redox-active iron, which allows the generation of indiscriminate oxidants such as the hydroxyl radical. It is presumed that superoxide kills bacteria directly, as the virulence of many pathogens is dramatically attenuated when their superoxide dismutase (SOD) genes are deleted. However, downstream products of superoxide also include hydrogen peroxide and hypochlorous acid, the reactive agent in bleach.

Mutations in the NADPH oxidase subunit genes cause several Chronic Granulomatous Diseases (CGD), such as

In these diseases, cells have a low capacity for phagocytosis, and persistent bacterial infections occur. Areas of infected cells are common, granulomas. A similar disorder called neutrophil immunodeficiency syndrome is linked to a mutation in the RAC2, also a part of the complex.

One study suggests a role for NADPH oxidase in ketamine-induced loss of neuronal parvalbumin and GAD67 expression.[3] Similar loss is observed in schizophrenia, and the results may point at the NADPH oxidase as a possible player in the pathophysiology of the disease.[4] Nitro blue tetrazolium is used in a diagnostic test, in particular, for chronic granulomatous disease, a disease in which there is a defect in NADPH oxidase; therefore, the phagocyte is unable to make the reactive oxygen species or radicals required for bacterial killing, resulting in bacteria thriving within the phagocyte. The higher the blue score the better the cell is at producing reactive oxygen species.

NADPH oxidase can be inhibited by apocynin and DPI (diphenylene iodonium). Apocynin prevents the assembly of the NADPH oxidase subunits. Using apocynin to inhibit NADPH oxidase may have clinical benefits in the treatment of influenza as it lessens influenza-induced lung inflammation in mice in vivo.[5]