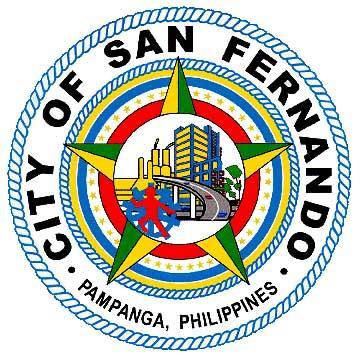 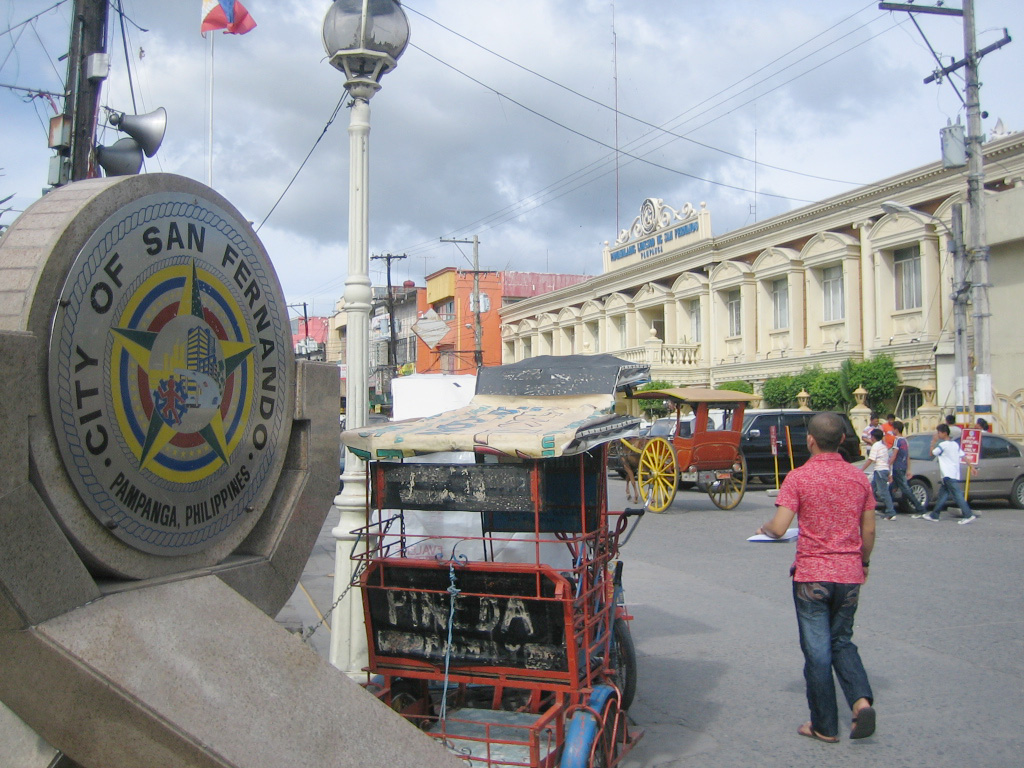 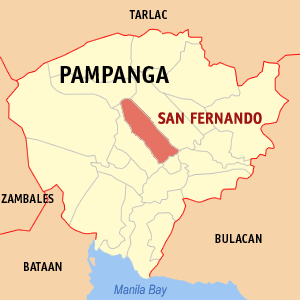 According to the 2000 census, it has a population of 221,857 people in 43,649 households. It is located 67 kilometers north of , 50 kilometers east of in the Zambales province, and 16 kilometers south of in . The city is positioned at the crossroads of Central Luzon. The city is named after of and placed under the patronage of San Fernando, King of , whose feast is celebrated every 30th of May.

The town of San Fernando was founded in 1754 from the towns of and Mexico. The first church was built in 1755 with wooden walls and nipa roofing. The municipal tribunal was erected later in the year in front of the town plaza using durable materials and thatched nipa roofing. Don Vidal de Arrozal served as its first gobernadorcillo that year.

In 1796, after serving as gobernadorcillo the previous year, Don Angel Pantaleon de Miranda retired to Barrio Saguin, from where he started setting up his hacienda in Barrio Culiat. The barrio was separated from San Fernando on the December 8, 1829 as the new town of Angeles, with the Los Santos Angeles Custodios as titular patrons.

In 1878, moves were made to create the town of Calulut. This new town would be composed of Calulut and the neighboring barrios of Bulaun, Malpitic, Sindalan, La Paz, Lara, Saguin, Telabastagan, Balete, Malinao, Pulung Bulu, Panipuan, Macabacle and the caserio of Pau in San Fernando, and Panipuan, Acle, Suclaban and the sitio of Gandus in Mexico. This plan did not materialize due to strong opposition from the parish priest of San Fernando.

Governor-General Eulogio Despujol and Manila Archbishop Bernardino Nozaleda inaugurated the San Fernando railroad station, together with the Bagbag-Mabalacat stretch of the Manila-Dagupan Railroad, on February 23, 1892. The station was second only to Manila in revenues that year, and was thus the most important provincial station of the Manila-Dagupan Railroad. On June 27 of the same year, National Hero Dr. made a stop-over in the town as part of his mission to recruit members to the .

On , the town was declared in a state of war despite the peaceful situation. Brigadier General Diego de los Rios arrived on December 2 to calm the revolution that started in Manila on August 30. General Ruiz Serralde took over the post of General Rios on , to maintain the peace in San Fernando. The revolution was not yet at its height with occasional exchanges of fire in some places in Pampanga.

On June 26, 1898, representatives from all Pampanga towns, except Macabebe, gathered in San Fernando to swear allegiance to Gen. Maximino Hizon who was the provincial military governor and representative of General Emilio Aguinaldo. On October 9, General together with his cabinet visited the town and was welcomed with so much applause and enthusiastic cheering from the public. He proceeded to the convento which was served as the military headquarters at that time.

On May 4, 1899, Philippine revolutionary troops led by General burned the casa municipal, the town church and several houses to render them useless to the approaching American forces. On June 16, due to the strategic location of the town, President Aguinaldo himself led Filipino forces in the Battle for San Fernando. The plan to retake the town proved unsuccessful. Calulut fell to American forces on August 9.

On August 15, 1904, the Pampanga provincial government was finally transferred to San Fernando from Bacolor, by virtue of Act No. 1204 signed on July 22, 1904. This was during the term of Governor Macario Arnedo and Municipal President Juan Sengson. The town of became part of San Fernando that same year. It will later regain its political independence in 1909.

On January 2, 1905, the town of Santo Tomas was consolidated with San Fernando by virtue of Act 1208.

On August 12, 1904, US Secretary of War visited the town to get first hand information and gather ideas for the governance of Pampanga. Due to the short notice, a bamboo pavilion was hastily constructed for his visit where he was welcomed with a banquet for 200 people. Taft would later be elected President of the United States.

In 1921, the (PASUDECO) sugar central began its operations. The company was formed in 1918 by large-scale planters such as Jose de Leon, Augusto Gonzalez, Francisco Liongson, Tomas Lazatin, Tomas Consunji, Francisco Hizon, Jose Henson, and Manuel Urquico in the San Fernando residence of Governor Honorio Ventura as part of a plan to construct a locally financed "central".

In 1932, the was founded by . Two years later, he created and headed the (AMT). The Abad Santos compound in Barangay San Jose became the focal point of the peasant movement.

On February 14, 1939, Philippine president proclaimed his social justice program before a gathering of farmers in front of the Municipal Government building.

In 1941, forces of the Japanese Imperial Army occupied the town and placed the municipal government under its supervision. The next year, thousands of Filipino and American POWs walked from Bataan to the San Fernando Train Station in what will be know as the .

In 1952, the town of Santo Tomas was separated from San Fernando.

In 1986, Mayor Paterno Guevarra was sworn in as officer-in-charge of the town after the successful People Power Revolution that toppled the Marcos dictatorship that same year. He was later elected municipal mayor.

In 1990, Philippine president inaugurated the Paskuhan Village, the first Christmas village in Asia and the third of its kind in the world. The next year, erupted after over 600 years of dormancy hurling a layer of ash and volcanic debris on the town.

On , , Typhoon Sibyl (Mameng) struck the town. It unleashed floodwaters and mudflows from Mount Pinatubo into the town. The Barangays of Sto. Nino, San Juan, San Pedro Cutud and Magliman were severely damaged by lahar. The citizens of San Fernando rallied to save the town by raising funds to build the St. Ferdinand People's Dike. The Pampanga Megadike was constructed the next year, thus preventing further damage to the town. [Henares, Ivan Anthony S. "A Brief History of San Fernando, Pampanga 1754-2004"]

On January 6, 1997, Mayor Rey B. Aquino and Senator launched the campaign for cityhood. On April 27th of that same year, Rep. Oscar Rodriguez filed House Bill No. 9267 creating the City of San Fernando.

In 2000, House Speaker and Senate President signed the approved city charter of San Fernando on December 4 and 13 respectively.

The City of San Fernando is politically subdivided into 36 barangays.

San Fernando serves as one of the agricultural processing center of Central Luzon. It is a major rice-producing region and an important sugar-producing area. The Pampanga Sugar Development Company (PASUDECO), was once the largest private employer in Pampanga. It is a major sugar processing plant in the region. Other manufacturing companies with offices in the city include Universal Robina Corporation, Zuellig Pharma Corporation, Nestle Philippines, Petrophil, Mondragon Industries, Asia Brewery, and Del Monte Corporation. Major bottling companies such as the Complex, Coca-Cola, Pepsi Cola, Cosmos and Metrobottling are located within the city.

Every year during the Christmas season, the city becomes the hub of a thriving industry centered on handcrafted lanterns called "parols". What distinguish the San Fernando lantern from the ordinary "parol" are the intricate designs and the illusion of dancing lights, which focuses on the vibrant colors of the lantern.

The City of San Fernando has four TV stations - KTV Channel 12, Infomax Channel 8, CLTV 36 and TV46 Pampanga. There are also two radio stations, the 5 Kilowatt RW 95.1 of the Radio World Broadcasting Corporation of the Philippines and the 2.5 kilowatt Power 92.7 of the Love Radio Network. Several local newspapers are published in the city which includes SunStar Pampanga, The Probe, Coffee Punch, Pampanga Times and the Observer. [ [http://www.pia.gov.ph/info/provinces/pampanga.pdf Province of Pampanga, A Profile of Region III] September, 2001.]

The tourism industry of the city is fueled by two major events, the annual Good Friday Lenten Rites in San Pedro Cutud and the in December. Both events draw thousands of tourists from around the country and the world.

*, a Catholic Archdiocesan University in the Pampanga. Though bearing the same name, this university in San Fernando is not, in any way, related to the Assumption College in Manila.
*East Central Colleges, formerly the Toledaño Vocational School of San Fernando, was established by the late Ciriaco Toledaño in the 1940s. The first establishment was located at the B. Mendoza Street and later, another branch was built in Mexico, Pampanga to house the high school students. As of today, East Central Colleges has two branches. One near the Iglesia ni Cristo for college students and one in Mexico, Pampanga for the high school students. The two are being managed and administered by the children of Ciriaco Toledaño.
*, formerly known as RM DATA Center
*
*
*
*
*, formerly known as CLIT
*
*
*St. Nicolas College
* [http://www.acsat.edu.ph Asian College of Science and Technology]
* [http://www.genetic.edu.ph Genetic Computer Institute - Pampanga Branch]
* [http://www.tihmsschool.net Tourism, Information Technology & Hotel Management School (TIHMS)]

Formerly known as the .

:Located at the mouth of the San Fernando Toll Exit along the North Luzon Expressway, North Philippines Hilaga was transformed into a cultural, historical, tourism, trade, and entertainment village by former Secretary Richard J. Gordon in 2003. Its design and concept make it a virtual window to the cultural and historical heritage of the four regions of the North Philippines as well as a showcase for their indigenous products, and arts and crafts. The star-shaped pavilions at the center pays tribute to the skilled lantern makers of San Fernando, Pampanga which produces the biggest lanterns in the world. The complex features a 1,000-seat capacity air-conditioned pavilion for conventions and special events, an open-air amphitheater for outdoor activities, air-conditioned exhibit halls, trade booths, garden restos and an 60-seat capacity conference hall.

:The Archdiocesan Museum and Archives of the is housed at the , and includes antiques and exquisite works of art depicting Pampanga’s rich cultural heritage. It contains numerous ecclesiastical artifacts ranging from a huge churchbell to paintings; ivory and wooden statues of all shapes and sizes, vestments worn by priests during Mass and chalices, monstrances, reliquaries and ciboriums made of gold, silver and precious gems, some dating back to the 17th century.

Churches and Other Religious Structures

:Several lantern factories can be visited in Unisite Subdivision, Barangay Del Pilar, as well as in Barangays Santa Lucia, San Jose and Dolores.

*, a former Chief Justice (featured in PHP1000 bill)
*, a former assemblyman and founder of the Socialist Party
* [http://www.senate.gov.ph/senators/former_senators/sotero_baluyot.htm Sotero J. Baluyut] , a former senator and cabinet secretary
*, first Socialist mayor in the Philippines
*, a renowned pre-war newspaper columnist
* [http://showbizandstyle.inquirer.net/lifestyle/lifestyle/view_article.php?article_id=11102 Conrado Dayrit] [http://www.nast.dost.gov.ph/pro_dayrit.htm] , a cardiologist, virgin coconut oil proponent and President of the National Academy of Science and Technology (1992-1999)
*, a revolutionary hero
*, an assemblyman and poet
*, a founder of the UST College of Architecture and Fine Arts
*, bishop of Cubao
*Tony Perez, a playwright