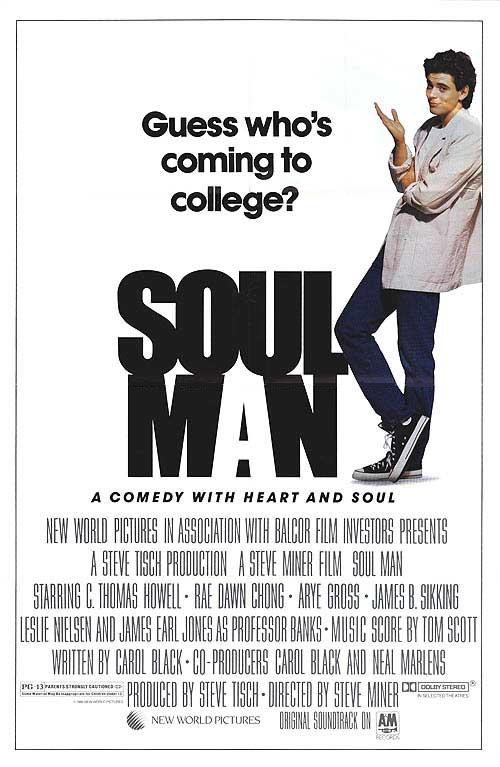 "Soul Man" is a made in 1986 about a man who undergoes with pills to qualify for an African-American only scholarship at . It stars , , , , and .

The title refers to the Sam and Dave song "Soul Man".

The movie's protagonist is Mark Watson (Howell), the single pampered son from a rich family who is about to attend Harvard Law School along with his best friend Gordon (Gross). However, all of a sudden his father's neurotic psychiatrist talks his patient into having more fun for himself instead of spending money on his son. Faced with the horrifying prospect of having to pay college by himself, Mark decides to take up a scholarship, but the only suitable one is for blacks only. So he decides to cheat: by using tanning pills in a larger dose than prescribed to appear as an , he sets out for Harvard, naively believing that nowadays blacks have no problems at all in American society.

However, once immersed in a black student's life, Mark finds that people are less lenient than he imagined and more prone to see him as a black instead of a fellow student. He meets a young African-American student named Sarah Walker (Chong), who he first only flirts with; gradually, however, he genuinely falls in love with her. As it turns out, she was the original candidate for the scholarship which he had ursurped, and now she has to work hard as a waitress to support herself and her little son George while studying. Slowly, Mark begins to regret his deed, and after a totally chaotic day - in which Sarah, his parents (who are not aware of his double life) and race-attracted Whitney () drop in for surprise visits at the same time - he drops the charade and openly reveals himself to be white.

The film ends with Mark declaring to his professor (Jones) that he wishes to pay back the scholarship and do charity work to make amends for his act of fraud, and Sarah decides to give him another chance.

* Mark needs a scholarship to get into Harvard. There's one more available for a black student. The problem is Mark's not black... Yet.
* He didn't give up. He got down.
*Guess who's coming to college?

In 1986 when the film was released it caused a big stir up among the African-American community because throughout most of the film is in make up.

The film crew also took footage on the Harvard College campus without getting permission from the university.