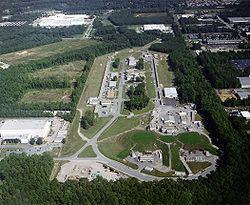 Thomas Jefferson National Accelerator Facility (TJNAF), commonly called Jefferson Lab or JLab, is a U.S. national laboratory located in Newport News, Virginia. Since June 1, 2006, it has been operated by Jefferson Science Associates, LLC, a joint venture between Southeastern Universities Research Association, Inc., and CSC Applied Technologies, LLC. Until 1996 it was known as the Continuous Electron Beam Accelerator Facility (CEBAF); this name is still commonly used for the main accelerator.

Founded in 1984, JLab employs over 675 people, and over 2,000 scientists from around the world have conducted research using the facility. Its stated mission is "to provide forefront scientific facilities, opportunities and leadership essential for discovering the fundamental structure of nuclear matter; to partner in industry to apply its advanced technology; and to serve the nation and its communities through education and public outreach."[1]

The laboratory's main research facility is the CEBAF accelerator, which consists of a polarized electron source and injector and a pair of superconducting RF linear accelerators 7/8 mile (1400 m) in length, connected to each other by two arc sections which contain steering magnets. As the electron beam makes up to five successive orbits, its energy is increased up to a maximum of 6 GeV. This leads to a design that appears similar to a racetrack, compared to the classical ring shaped accelerator shape found at sites such as CERN or Fermilab. Effectively, CEBAF is a linear accelerator, like SLAC at Stanford, that has been folded up to a tenth of its normal length.

The design of CEBAF allows the electron beam to be continuous rather than the pulsed beam typical of ring shaped accelerators. (There is some beam structure but the pulses are very much shorter and closer together.) The electron beam is directed onto three potential targets (see below). One of the distinguishing features of JLab is the continuous nature of the electron beam, with a bunch length of less than 1 picosecond. Another is JLab's use of superconducting RF (SRF) technology, which uses liquid helium to cool niobium to approximately 4 K (−452.5°F), removing electrical resistance and allowing the most efficient transfer of energy to an electron. To achieve this, JLab houses the world's largest liquid helium refrigerator, and was one of the first large-scale implementators of SRF technology. The accelerator is built 8 meters, or approximately 25 feet, below the Earth's surface, and the walls of the accelerator tunnels are 2 feet thick.

The beam ends in three experimental halls, labelled Hall A, Hall B, and Hall C. Each hall contains a unique spectrometer to record the results of collision between the electron beam and a stationary target. This allows physicists to study the structure of the atomic nucleus, specifically the interaction of the quarks that make up protons and neutrons of the nucleus.

When a nucleus in the target is hit by an electron from the beam, an "interaction", or "event", occurs, scattering particles into the hall. Each hall contains an array of particle detectors that track the physical properties of the particles produced by the event. The detectors generate electrical pulses that are converted into digital values by analog to digital converters (ADCs), time to digital converters (TDCs) and pulse counters (scalers).

This digital data must be gathered and stored so that the physicist can later analyze the data and reconstruct the physics that occurred. The system of electronics and computers that perform this task is called a data acquisition system.

As of June 2010, construction has begun an additional end station, Hall D, on the opposite end of the accelerator from the other three halls, as well as an upgrade which doubles the beam energy to 12 GeV. Concurrently, an addition to the Test Lab, (where the SRF cavities used in CEBAF and other accelerators used worldwide are manufactured) is being constructed.

JLab houses the world's most powerful tunable free electron laser, with an output of over 14 kilowatts.

Since CEBAF has three complementary experiments running simultaneously, it was decided that the three data acquisition systems should be as similar as possible, so that physicists moving from one experiment to another would find a familiar environment. To that end, a group of specialist physicists was hired to form a data acquisition development group to develop a common system for all three halls. CODA, the CEBAF Online Data Acquisition system, was the result [1]

The ADC, TDC and other digital electronics are typically large circuit boards with connectors at the front edge that provide input and output for digital signals, and a connector at the back that plugs into a backplane. A group of boards are plugged into a chassis, or "crate", that provides physical support, power and cooling for the boards and backplane. This arrangement allows electronics capable of digitizing many hundreds of channels to be compressed into a single chassis.

In the CODA system, each chassis contains a board that is an intelligent controller for the rest of the chassis. This board, called a ReadOut Controller (ROC), configures each of the digitizing boards upon first receiving data, reads the data from the digitizers, and formats the data for later analysis.