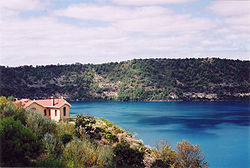 Mount Gambier is a maar complex in South Australia associated with the Newer Volcanics Province. It contains four lake-filled maars called Blue Lake, Valley Lake, Leg of Mutton Lake, and Brownes Lake.[1] It is one of Australia's youngest volcanoes which formed about 5,600 years ago.

"Ash from the Mt Gambier area has been dated at about 4,700 years old and about 1,400 years old, indicating that the vents were certainly active at these times, though possibly for a considerable period before and after."[2]

Mount Gambier is thought to have formed by a mantle plume centre called the East Australia hotspot which may currently lie offshore.[1]

Of the original four lakes found within the calderas, only two remain. The Leg of Mutton Lake (named for the outline of its shoreline) became permanently dry in the 1960s. Brownes Lake suffered a similar fate in the late 1980s. Both these lakes were quite shallow; their demise is attributed to the lowering of the water table as a result of many years of land drainage to secure farmland.