The Breguet 19 (Breguet XIX, Br.19 or Bre.19) was a light bomber and reconnaissance plane, also used for long-distance flights, designed by the French Breguet company and produced from 1924.

The Breguet 19 was designed as a successor to a highly successful World War I light bomber, the 14. Initially, it was designed to be powered by a 450 hp/335 kW Bugatti U-16 engine, driving a four-blade propeller, and such a prototype was shown on the 7th Paris Air Show in November 1921.[1] A new design was flown in March 1922, featuring a conventional layout with a single 336 kW (450 hp) Renault 12Kb inline engine. The aircraft was built in a biplane platform, with shorter lower wings. After trials, the Breguet 19 was ordered by the French Air Force in September 1923.

The first 11 Breguet 19 prototypes were powered by a number of different engines. A "trademark" of Breguet was the wide usage of duralumin as a construction material, instead of steel or wood. At that time, the aircraft was faster than other bombers, and even some fighter aircraft. Therefore, it met with a huge interest in the world, strengthened by its sporting successes. Mass production, for the French Air Force and export, started in France in 1924.

The Breguet 19 was a biplane (sesquiplane), conventional in layout, with braced wings. The fuselage, ellipsoid in cross-section, was a frame of duralumin pipes. The front part was covered with duralumin sheets, the tail with canvas. The wings were canvas covered. It had a conventional fixed landing gear with rear skid. The crew of two, pilot and observer/bombardier, sat in tandem in open cockpits, with dual controls.

A fixed 7.7 mm (.303 in) Vickers machine gun with interrupter gear was operated by the pilot, while the observer had twin 7.7 mm (.303 in) Lewis Guns. There was also a fourth machine gun, which could be fired by the observer downwards through an opening in a floor. The CN2 night fighter variant was fitted with two pilot's machine guns.[2] The bomber variant could carry up to 472 kg (1,041 lb) of bombs under the fuselage, or in a vertical bomb bay (small bombs up to 50 kg/110 lb). The reconnaissance variant could carry 12 10 kg (20 lb) bombs. The reconnaissance variant had a camera mounting, which was optional on the bomber variant. All variants had radio.

Br.19.01 was the first Breguet 19 prototype which first flew in March 1922. It was later bought by the Spanish government.[2]

Pre-production aircraft, whose fuselage was lengthened by 60 cm. Br.19.02 was sent to Yugoslavia for evaluation in 1923.[2]

Built in 1927 with various aerodynamical refinements and 3,735 L (987 US gal) of fuel in the fuselage. With an additional fuel tank in the wing, the total fuel capacity was 4,125 L (1,089 US gal). Five were built by Breguet and two by the Spanish company CASA. Three of the French aircraft had a 600 hp Hispano 12Lb, one had a 550 hp Renault 12 kg, and one had a 450 hp Lorraine 12Eb. The first Bidon Hispano was sold to Belgium, and the Bidon Renault was sold to China after a Paris–Beijing flight. The third Bidon Hispano became the French Br.19 TF.[2] The second Spanish Bidon was christened Jesús del Gran Poder, and flew from Sevilla to Bahia (Brazil).[4]

The last and most advanced long-distance variant, built in 1929, and designed for transatlantic flight. The French Super Bidon was the third Br.19 TR Hispano, named Point d'Interrogation, with a modified fuselage, a wingspan of 18.3 m (60 ft), and 5,370 L total fuel capacity.[3] It was powered by a 447 kW (600 hp) Hispano-Suiza 12Lb engine (later replaced by a 485 kW/650 hp 12Nb). Another aircraft, with a closed canopy, was built in Spain in 1933. Christened Cuatro Vientos, it flew from Sevilla to Cuba, and disappeared while attempting to reach Mexico.[5]

Utilizing the experience with long-distance variants, this improved reconnaissance variant was developed in 1928, maybe for export purposes. It remained a prototype only (with civilian register F-AIXP).[2]

The most popular of the late variants developed in 1930 with a 447 kW (600 hp) Hispano-Suiza 12Nb engine, giving a maximum speed of 242 km/h (150 mph). The first five machines were converted in France for Yugoslavia, then a number were built in Yugoslavia, and a further 50 built in France for export to Turkey.

A single prototype developed in Yugoslavia with a 641 kW (860 hp) Hispano-Suiza 12Ybrs engine.

Fitted with twin floats as a seaplane, a single prototype (no.1132) was produced for France. Another aircraft sold Japan was fitted with floats built there by Nakajima.[2]

Some modified civilian variants of the Breguet 19 were developed, such as the Br.19T, the Br.19T bis and the Br.19 Limousine (for six passengers, with a thicker fuselage), but these were never built.[2]

Further passenger variants with a totally rebuilt fuselage were designated :

These were used in limited numbers in France and Spain.

In total, more than 2,000 Breguet 19s were manufactured in France, and about 700 license-built by Spanish CASA, Belgian SABCA and the Yugoslavian factory in Kraljevo.[6] 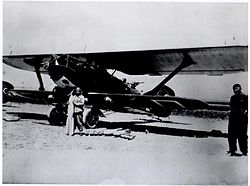 Sabiha Gökçen holding a bomb before the bombardment mission over Dersim with her Breguet 19.

Both standard and modified Breguet 19s were used for numerous record-breaking flights. The first was the Br.19 prototype, which won a military aircraft speed contest in Madrid on 17 February 1923. On 12 March 1923, it also set an international altitude record of 5,992 m (19,660 ft) carrying a 500 kg (1,100 lb) load. It was later bought by Spanish government.

The Super Bidon was created especially for the purpose of a transatlantic flight. It was named Point d'Interrogation ("The Question Mark"). Dieudonne Costes and Maurice Bellonte set a non-stop distance record of 7,905 km (4,911 mi) from Paris to Moullart on 27–29 September 1929 on this plane. Then on 1–2 September 1930, they flew from Paris to New York City, a distance of 6,200 km (3,900 mi) making the first non-stop east-west crossing by a fixed-wing aircraft of the North Atlantic.[7] The second Super Bidon, the Spanish Cuatro Vientos, vanished over Mexico with M. Barberan and J. Collar Serra, after a transatlantic flight from Seville to Cuba on 10–11 June 1933.

Data from The Encyclopedia of World Aircraft[8]