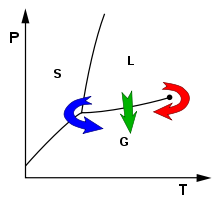 Supercritical drying is a process to remove liquid in a precisely controlled way. It is useful in the production of microelectromechanical systems (MEMS), the drying of spices, the production of aerogel, and in the preparation of biological specimens for scanning electron microscopy.

As the substance in a liquid body crosses the boundary from liquid to gas (see green arrow in phase diagram), the liquid changes into gas at a finite rate, while the liquid body's volume decreases. When this happens within a heterogeneous environment, surface tension in the liquid body pulls against any solid structures the liquid might be in contact with. Delicate structures such as cell walls, the dendrites in silica gel, and the tiny machinery of microelectromechanical devices, tend to be broken apart by this surface tension as the liquid–solid interface moves by.

To avoid this, the sample can be brought via two possible alternate paths from the liquid phase to the gas phase without crossing the liquid–gas boundary on the phase diagram. In freeze-drying, this means going around to the left (low temperature, low pressure; blue arrow). However, some structures are disrupted even by the solid–gas boundary. Supercritical drying, on the other hand, goes around the line to the right, on the high-temperature, high-pressure side (red arrow). This route from liquid to gas does not cross any phase boundary, instead passing through the supercritical region, where the distinction between gas and liquid ceases to apply. Densities of the liquid phase and vapor phase becomes equal at critical point of drying. 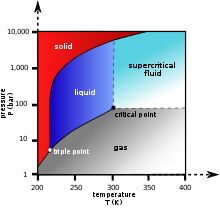 In most such processes, acetone is first used to wash away all water, exploiting the complete miscibility of these two fluids. The acetone is then washed away with high pressure liquid carbon dioxide, the industry standard now that freon is unavailable. The liquid carbon dioxide is then heated until its temperature goes beyond the critical point, at which time the pressure can be gradually released, allowing the gas to escape and leaving a dried product.