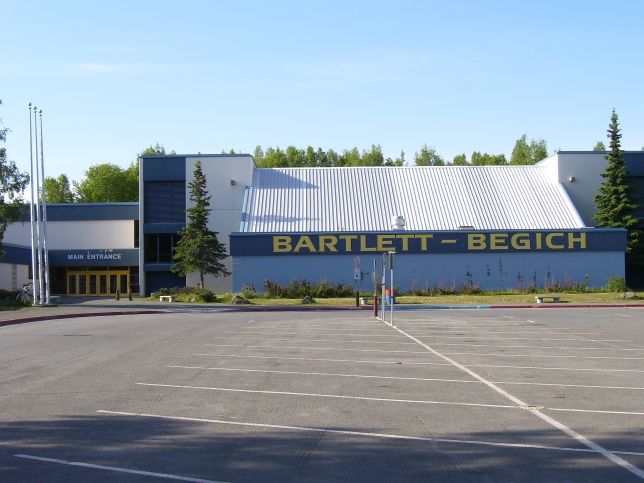 Bartlett is part of the and is accredited by the . Its attendance area is northeast Anchorage, , and , and approximately 25% of its students are military dependents. The student intake is ethnically diverse, with 59% Caucasian students, 16% African-American; 10% Alaska Native or American Indian; 8% Asian or Pacific Islander, and 7% Hispanic.

Bartlett is classified as a 4A school by the .

At the time the school now named (an alternative school originally paired as a junior high with East High School, opened in 1991

In November 2006, the Anchorage School Board made official that the name of a new middle school in Anchorage would be named after Begich.

Like other schools, Bartlett High School has occasionally been the target of vandalism. In May 1999, six Bartlett seniors were suspended and their right to march at commencement with their class revoked after they carved their names into acoustic ceiling tiles in the senior hallway. The Anchorage School Board later relented and permitted the six students to participate in graduation ceremonies.

A more serious case occurred on , when a stand-alone relocatable classroom was destroyed by fire, causing an estimated $89,500 in damage. Two Anchorage teenagers — an 18-year-old former Bartlett student and a 16-year-old Steller Secondary student — were arrested a week later and charged with tampering with evidence, criminally negligent burning and criminal mischief.

Former teachers Gordon "Satch" Carlson and Richard Von Kennen were both fired in disgrace for having sexual relations with female students.

Carlson, an English, journalism, and film teacher and columnist for the "" and "" in the 1980s (and one-time editor of the school newspaper, then called the Toklat Ledger), faced three felony criminal charges in August 1989 involving his sexual relationship with a 17-year-old Bartlett senior that could have sent him to prison for eight years.

Meanwhile, filed a lawsuit against the and local prosecutors after a two-day police raid on Bartlett High School — its legality disputed by the school district — found documents showing that the school district had given Carlson a 2.5% bonus and a promise of secrecy in exchange for his resignation. The school district argued that as the age of consent in Alaska was 16, the district had no legal obligation to report Carlson's behavior to law enforcement.

In reaction to the Satch Carlson case, the Alaska State Professional Teaching Practices Commission adopted a new regulation that specifically prohibited any sex at all between teachers and students.

Richard Von Kennen was a music teacher at Bartlett from 1973 to May 1996, when he was fired after being charged under the Satch Carlson law with seven felony counts of child sexual abuse involving a student. His victim had been 14 at the time he initiated sexual contact. If found guilty Von Kennen could have received a maximum sentence of 30 years on each count. After the story broke, two other women, former students, came forward with accusations against him, but no further charges resulted. Von Kennen eventually made a plea agreement and pled no contest to one felony charge of sexually abusing a minor. He received a five-year prison sentence.