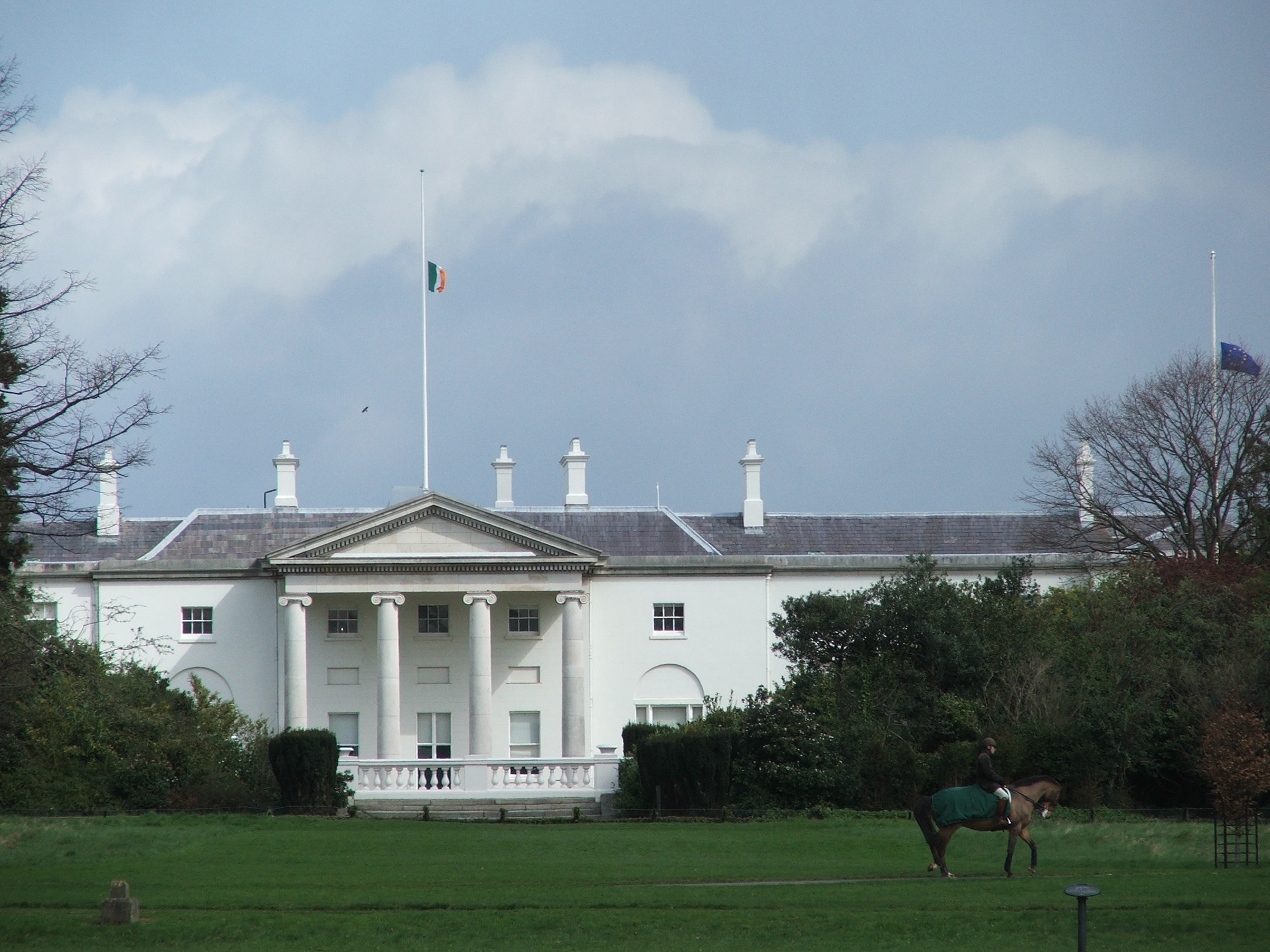 The original house was designed by park ranger and amateur , in the mid eighteenth century. It was bought by the administration of the British to become his summer residence in the 1780s. His official residence was in the Viceregal Apartments in Dublin Castle. The house in the park later became the "Viceregal Lodge", the "out of season" residence of the Lord Lieutenant (also known as the ), where he lived for most of the year from the 1820s onwards. During the Social Season (January to in March) he lived in state in Dublin Castle.

Phoenix Park once contained three official state residences. The , the and the . The Chief Secretary's Lodge, now called Deerfield, is the residence of the Ambassador to Ireland and the Under Secretary's Lodge has served for many years as the .

Some historians have claimed that the garden front portico of Áras an Uachtaráin (which can be seen by the public from the main road through the ) was used as a model by Irish architect who designed the . However the portico was built after he had left for the . (There is better evidence he used as a model.)

In 1882, its grounds became the location for a famous murder. The (the British Cabinet minister with responsibility for Irish affairs), , and the (chief civil servant), T.H. Burke, were stabbed to death with surgical knives while walking back to the residence from . A small insurgent group called the Invincibles was responsible for the deed. The Lord Lieutenant, the 5th Earl Spencer, heard their screams from a ground floor window in the drawing room.

Residence of the Governor-General of the Irish Free State

In 1911, the house underwent a large extension for the visit of King George V and Queen Mary. With the creation of the in 1922, the office of Lord Lieutenant was abolished. The new state planned to place the new representative of the Crown, Governor-General Tim Healy in a new, smaller residence, but because of death threats from the anti-treaty IRA, he was installed in the Viceregal Lodge temporarily. It remained the residence of the until 1932, when the new Governor-General, , was installed in a specially hired private mansion in the southside of Dublin.

Residence of the President of Ireland

The house was left empty for some years, until the office of President of Ireland was created in 1937. In 1938, the first President, lived there temporarily while plans were made to build a new presidential palace on the grounds. The outbreak of saved the building, which had been renamed "Áras an Uachtaráin" (meaning "house of the president" in Irish), from demolition, as plans for its demolition and the design of a new residence were put on hold. By 1945 it had become too closely identified with the presidency of Ireland to be demolished, though its poor condition meant that extensive demolition and rebuilding of parts of the building were necessary, notably the kitchens, servants' quarters and chapel.

Since then the house has undergone occasional bouts of restoration. The first President, lived in the residential quarters on the first floor of the main building. Later presidents moved to the new residential wing attached to the main house that had been built on for the visit of King George V in 1911. However, in 1990 moved back to the older main building. The current occupant, lives in the 1911 wing.

Though Áras an Uachtaráin is possibly not as palatial as other European royal and presidential palaces, with only a handful of state rooms (the state drawing room, large and small dining rooms, the President's Office and Library, a large ballroom and a presidential corridor lined with the busts of past presidents (Francini Corridor), and some fine eighteenth and nineteenth century bedrooms above, all in the main building), it is a relatively comfortable state residence, and to a size and aspect commensurate with the nation it represents.

All as well as Government Ministers receive their seal of office from the President at Áras an Uachtaráin as do s, the Attorney General, the , and senior of the Defence Forces. It is also the venue for the meetings of the Presidential Commission and the Council of State.

Various visiting British monarchs stayed at the Viceregal Lodge, notably Queen Victoria and George V. American presidents hosted here include Presidents , , and , all of Irish descent. Other famous visitors to the Áras an Uachtaráin have been Princess Grace of Monaco and her husband, Prince Rainier III; King Baudouin of the Belgians; King Juan Carlos and Queen Sophia; ; Prince Charles, and Prince Philip.

Guests do not normally stay at the Áras. Although it has ninety-two rooms, many of these are used for storage of presidential files, for household staff and official staff, including military "aides-de-camp", a Secretary to the President (somewhat equivalent to Chief of Staff in the White House, except it is a permanent civil service position) and a press office. The Irish state recently opened a guest palace nearby in , a former mansion.

On , during Ireland's six-month presidency of the , Áras an Uachtarain was the Venue for the "European Day of Welcomes" (Accession Day) in which ten new members joined the EU. All 25 heads of government attended the flag raising ceremony in the gardens of the palace. A large security operation involving the Gardaí and the Irish Defence Forces closed off the Áras and the Phoenix Park.

Áras an Uachtaráin is now open for free tours every Saturday.