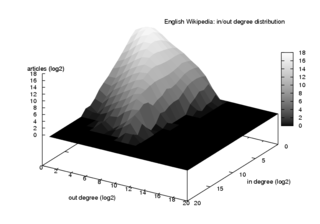 In the study of graphs and networks, the degree of a node in a network is the number of connections it has to other nodes and the degree distribution is the probability distribution of these degrees over the whole network.

The degree distribution P(k) of a network is then defined to be the fraction of nodes in the network with degree k. Thus if there are n nodes in total in a network and nk of them have degree k, we have P(k) = nk/n.

The same information is also sometimes presented in the form of a cumulative degree distribution, the fraction of nodes with degree greater than or equal to k.

The degree distribution is very important in studying both real networks, such as the Internet and social networks, and theoretical networks. The simplest network model, for example, the (Bernoulli) random graph, in which each of n nodes is connected (or not) with independent probability p (or 1 − p), has a binomial distribution of degrees:

(or Poisson in the limit of large n). Most networks in the real world, however, have degree distributions very different from this. Most are highly right-skewed, meaning that a large majority of nodes have low degree but a small number, known as "hubs", have high degree. Some networks, notably the Internet, the world wide web, and some social networks are found to have degree distributions that approximately follow a power law: P(k) ~ k−γ, where γ is a constant. Such networks are called scale-free networks and have attracted particular attention for their structural and dynamical properties.