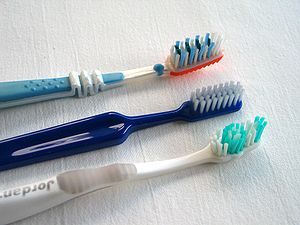 The toothbrush is an oral hygiene instrument used to clean the teeth and gums that consists of a head of tightly clustered bristles mounted on a handle, which facilitates the cleansing of hard-to-reach areas of the mouth. Toothpaste, which often contains fluoride, is commonly used in conjunction with a toothbrush to increase the effectiveness of toothbrushing. Toothbrushes are available with different bristle textures, sizes and forms. Most dentists recommend using a toothbrush labelled "soft", since hard bristled toothbrushes can damage tooth enamel and irritate the gums.[1] Toothbrushes have usually been made from synthetic fibers since they were developed, although animal bristles are still sometimes used.[citation needed] 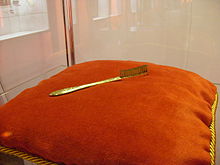 A variety of oral hygiene measures have been used since before recorded history. This has been verified by various excavations done all over the world, in which chew sticks, tree twigs, bird feathers, animal bones and porcupine quills were recovered. The first toothbrush recorded in history was made in 3000 BC, a twig with a frayed end called a chew stick.

Various forms of toothbrush have been used. Indian medicine (Ayurveda) used the twigs of the neem or banyan tree to make toothbrushes and other oral-hygiene-related products for millennia. The end of a neem twig is chewed until it is soft and splayed, and it is then used to brush the teeth. In the Muslim world, chewing miswak, the roots or twigs of the Arak tree (Salvadora persica), which have antiseptic properties, is common practice. Rubbing baking soda or chalk against the teeth has also been common practice in history.

In 1223, Japanese Zen master Dōgen Kigen recorded on Shōbōgenzō that he saw monks in China clean their teeth with brushes made of horse-tail hairs attached to an ox-bone handle.

For the origin of modern toothbrush,according to a Library of Congress website, the Chinese have used the bristle toothbrush since 1498, during the reign of the Hongzhi Emperor (r. 1487–1505) of the Ming Dynasty (1368–1644). It is thought that the Chinese version of the toothbrush spread to Europe, brought back from China to Europe by travellers.[2] This is the origin of modern toothbrush. Library of Congress website also adds that the toothbrush was not mass-produced until 1780, when they were sold by a William Addis of Clerkenwald, England. 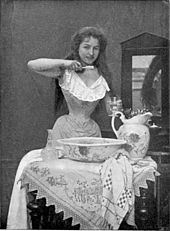 A photo from 1899 showing the use of a toothbrush.

The earliest identified use of the word toothbrush in English was in the autobiography of Anthony Wood, who wrote in 1690 that he had bought a toothbrush from J. Barret.[3]

William Addis of England is believed to have produced the first mass-produced toothbrush in 1780.[2][4] In 1770 he had been jailed for causing a riot; while in prison he decided that the method used to clean teeth – at the time rubbing a rag with soot and salt on the teeth – could be improved, so he took a small animal bone, drilled small holes in it, obtained some bristles from a guard, tied them in tufts, passed the tufts through the holes on the bone, and glued them. He soon became very rich. He died in 1808, and left the business to his eldest son, also called William; the company continues to this day under the name of Wisdom Toothbrushes.[5] By 1840 toothbrushes were being mass-produced in England, France, Germany, and Japan.[5] Pig bristle was used for cheaper toothbrushes, and badger hair for the more expensive ones.[5]

The first patent for a toothbrush was by H. N. Wadsworth in 1857 (US Patent No. 18,653) in the United States, but mass production in the USA only started in 1885. The rather advanced design had a bone handle with holes bored into it for the Siberian boar hair bristles. Animal bristle was not an ideal material as it retains bacteria and does not dry well, and the bristles often fell out. In the USA brushing teeth did not become routine until after World War II, when American soldiers had to clean their teeth daily.[4] 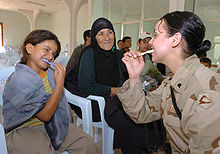 A child being shown how to use a toothbrush.

Natural animal bristles were replaced by synthetic fibers, usually nylon, by DuPont in 1938. The first nylon bristle toothbrush, made with nylon yarn, went on sale on February 24, 1938. The first electric toothbrush, the Broxodent, was invented in Switzerland in 1954.[6]

In January 2003 the toothbrush was selected as the number one invention Americans could not live without according to the Lemelson-MIT Invention Index.[7] 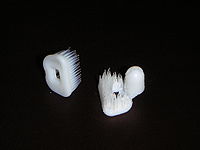 A chewable toothbrush is a miniature plastic moulded toothbrush that can be used when no water is available. They tend to be very small, but should not be swallowed. They are most commonly available from bathroom vending machines. They are available in different flavors such as mint or bubblegum and should be disposed of after use.