The National Rural Letter Carriers' Association (NRLCA) is an American labor union that represents Rural Letter Carriers employed by the United States Postal Service. The purpose of this Association shall be to "improve the methods used by rural letter carriers, to benefit their conditions of labor with the United States Postal Service (USPS), and to promote a fraternal spirit among its members."

To be able to join the NRLCA, one must first be employed by the USPS and work in the rural carrier craft as a Rural Carrier Associate (RCA), Substitute Rural Carrier, Rural Carrier Relief (RCR), Part-time Flexible (PTF) or Regular Carrier (Designation Code 71). Though temporary relief carriers (TRCs) are excluded from membership, article seven of the contract between the NRLCA and USPS provides guidelines for the implementation of TRCs. Upon completion and processing of NRLCA form 1187, an official membership card is mailed, and the benefits of membership begin. The NRLCA provides information and fellowship for its members at county, district, state & national meetings where all members may participate in a democratic process of developing Association policy. The NRLCA provides a monthly publication, The National Rural Letter Carrier, to keep its members informed on postal and legislative matters of interest.[1]

Free mail delivery began in American cities in 1863 with a limited scope. Shortly afterwards, rural citizens began petitioning for equal consideration. Rural free deliver (RFD) of mail began in the United States in 1896 with five routes. Seven years later, it had expanded to 15,119 routes covering 322,618 miles. The NRLCA was formed in 1903 at a cost of fifty cents per year in dues to its members.

The NRLCA held its first annual national convention in Chicago, Illinois, September 11–12, 1903 (the only year since without an NRLCA national convention was 1918 due to World War I. During World War II, the convention was limited to a small conference in St. Paul, Minnesota in 1942, and Cincinnati, Ohio the following two years. In 1945, a National Board Session was held in lieu of a delegate gathering). In attendance were 52 delegates from 15 states. The host state was represented by the most delegates with 13, followed by Michigan with twelve. Indiana and Nebraska both had five, Missouri had four, Iowa had three, Minnesota, New York and Ohio each had two and Colorado, Georgia, Massachusetts and Wisconsin all had one. While represented by the NRLCA, neither Kansas nor Oklahoma had a representative in attendance.

The first officers elected to serve the NRLCA on day two of the NRLCA's first national convention (September 12, 1903) were:

In 1906, rural carriers were granted six national holidays. Christmas was not one of them, and did not become a holiday for rural carriers until 1923. In 1908, women attended the NRLCA national convention for the first time. In 1924, a special association committee traveled to Washington, D.C. to lobby for an equipment maintenance allowance (EMA). The following year, it became law. In 1928, the NRLCA implemented term limits for its officers. However, term limits were repealed in 1932. In 1941, tire and gasoline rationing from World War II affected rural carriers. NRLCA President Wallker gained some exemptions from rationing for rural carriers. In 1946, the National Association of Letter Carriers (NALC) expressed interest in incorporating RFD into their union. In 1947, the NRLCA declined.

In 1962, President John F. Kennedy signed executive order 10988 establishing employee-management cooperation in the federal service. Rural carriers selected the NRLCA as their agent, and the union has held exclusive recognition to represent the rural carrier craft within the Post Office since.

The NRLCA ratified its first constitution on day two of its first national convention in Chicago, Illinois, September 12, 1903. H. H. Windsor, editor of Popular Mechanics magazine as well as the RFD News (now The National Rural Letter Carrier) and chair of the Constitution & Bylaws Committee, presented his committee's report, followed by discussion on each article. One of the many topics discussed was union dues. Originally, the NRLCA sought one dollar a year from its members, however, this was negotiated down to fifty cents a year by the time this constitution was ratified (In 1910, dues were raised to 75 cents per year. The following year, it was reduced back down to 50 cents a year. It took until 1919, for dues to reach the dollar originally sought). The articles were amended and approved in order, and after adoption of each separate article, the entire constitution was voted upon and adopted in its entirety.

Contract with the USPS 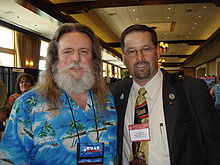 Following the establishment of executive order 10988 in 1962, the NRLCA and USPS established their first national agreement on a contract for rural carriers. As a result of this contract, the Heavy Duty Agreement, or Evaluated Pay System was established (Rural Carriers are paid a salary based upon an evaluation of their particular route. Credit is given to all carriers' duties and compensated accordingly). On August 12, 1970, President Richard Nixon signed the Postal Reorganization Act (PRA). The Post Office Department became the United States Postal Service, and the NRLCA became a union, with collective bargaining rights for wages and fringe benefits.

The most recent contract between the NRLCA and USPS was entered into as of December 3, 2007, and ran through December 2010.[4] At midnight, November 20, 2010, negotiations between the NRLCA and USPS on a new contract ended in an impasse, and is likely headed to a third party arbitrator.[5] The parties expect to meet soon to discuss the next steps. 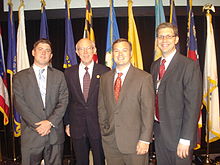 Since its inception, the NRLCA has had an effective legislative program in the Congress to promote and protect the interests of rural carriers. The Political Action Committee (NRLCA-PAC) was created in 1975 specifically to represent rural letter carrier interests on Capitol Hill by lobbying key government officials and staff on Contract Delivery Service (CDS), five day delivery, the FERS (Federal Employees Retirement System) Sick Leave Bill currently in the United States House of Representatives, and other issues affecting rural carriers. NRLCA-PAC supports members currently in Congress who are friendly to its positions; gains access to members who are on key congressional committees whose jurisdiction affects issues that are important to the rural carrier craft, and develops relationships with current and new congressional candidates. NRLCA-PAC also educates and alerts NRLCA membership on key issues & developments, and encourages rural carriers to become involved legislatively. 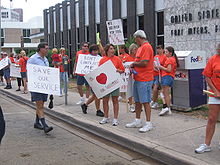 Contract Delivery Service is purchased on a contractual basis by the U.S. Postal Service whereby mail is carried from one USPS specified starting point to another, via highway, by private carriers; also called star route. CDS carriers are not USPS employees, but are independent contractors who provide mail service on these routes. The NRLCA believes that contract delivery inhibits the security, sanctity and service of the USPS, and believes that Congress should supporting H.Res. 282[6] and S. 1457.[7]

On January 28, 2009, Postmaster General John E. Potter testified before the Senate[8] that if the Postal Service is not able to readjust their payment toward the pre-funding of retiree health benefits, as mandated by the Postal Accountability & Enhancement Act of 2006,[9] the USPS would be forced to consider cutting delivery to five days per week during the summer months of June, July, and August.

H.R. 22, addressing this issue, passed the House of Representatives and Senate and was signed into law on September 30, 2009. However, PMG Potter has continued to unveiled a plan to eliminate Saturday mail delivery. The universal service obligation[10] and six day delivery are upheld by Congressional language within Appropriations legislation, so a reduction in service would require action from the House and Senate.[11]

On June 10, 2009, the NRLCA, along with other union and management groups of the United States Postal Service, was contacted for its input on the USPS's current study of the impact of five day delivery along with developing an implementation plan for a five day service plan. A team of postal service headquarters executives and staff were given a time frame of sixty days to complete the study. The current concept examines the impact of five day delivery with no business or collections on Saturday, with Post Offices with current Saturday hours remaining open.

On July 30, 2009, NRLCA President Don Cantriel testified before the House Oversight and Government Reform subcommittee on the Federal Workforce, Postal Service, and D.C. urging Congress to continue its interest in the Postal Service, and voiced opposition to five day delivery.

On Thursday, April 15, 2010, the House Committee on Oversight and Government Reform held a hearing to examine the status of the Postal Service and recent reports on short and long term strategies for the financial viability and stability of the USPS entitled "Continuing to Deliver: An Examination of the Postal Service’s Current Financial Crisis and its Future Viability." At which, PMG Potter testified that by the year 2020, the USPS cumulative losses could exceed $238 billion, and that mail volume could drop 15% from 2009.[12]

Chairman Jose Serrano (D-NY), of the House Appropriations subcommittee on Financial Services and General Government, which oversees language mandating six day service, said "While I understand the seriousness of the Postal Service's fiscal issues, I remain supportive of a six day delivery schedule. I will be in conversations in coming weeks with the senior postal leadership and the postal unions in an effort to avoid service cuts."

Mothers' Day weekend every year, as they deliver their mail, rural and city letter carriers collect non-perishable food donations left by the mailboxes on their route from postal customers participating in the NALC Stamp Out Hunger National Food Drive.

Beginning in 1993, the NALC, Campbell Soup, Valpak, United Way of America, Second Harvest, the AFL-CIO & cartoonist Bil Keane have partnered for the largest single day food collection in the nation. In 2010, the NRLCA became a full partner in the annual drive (though the NRLCA had participated in the drive from its inception), and the drive collected a record 77.1 million lbs. of non-perishable food for the needy from postal customers. That brought the total for the first eighteen years to over a billion pounds.[13]

On November 14, 2008, the NRLCA withdrew its support from the Quality of Work Life/Employee Involvement (QWL/EI) program effective January 1, 2009. QWL was intended, as the title suggests, to work toward improving the “quality of work life” for rural carriers and their managers alike at all levels of the organization as a joint, cooperative venture between USPS managers and rural letter carriers.

The Postal Service funded all QWL-EI activities, and became more insistent upon QWL/EI working exclusively on issues that support its corporate goal. Thus, the NRLCA viewed the QWL/EI process headed in a different direction than its original intention, and concluded that the Postal Service’s commitment to improve the workplace environment has been pushed to the bottom of the list of concerns. On December 12, 2008, the Postal Service confirmed that QWL/EI will be closed entirely.[14] As NRLCA President Don Cantriel put it, "They were looking for an excuse to get rid of it; we gave it to them."

On August 19, 2011, the NRLCA became the first labor union in the history of the United States Postal Service to elect a female President, Jeanette Dwyer. 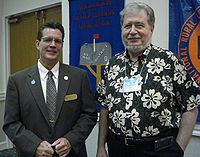 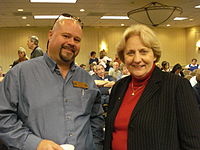