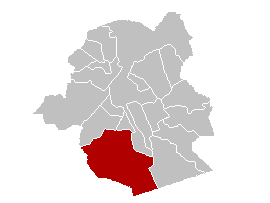 Ukkel (Dutch) or Uccle (French) is one of the nineteen municipalities located in the of .Uccle is known for its well-to-do areas, its green spots, and its high rental rates.

Origins to the 19th century

According to legend, Uccle’s church of Saint Peter was dedicated by in the year 803, with and , attending the ceremony. During the following centuries, several noble families built their manor and took residency here. The first mention of the name "Woluesdal", now evolved into "Wolvendael", dates from 1209. In 1467, Isabella of Portugal, wife of founded a convent on Uccle’s territory. Later, Uccle became the capital of the area including . Throughout the early stages of its history, however, the village of Uccle always had a predominantly rural character and lived mostly from the products of forestry and agriculture.

At the end of the 18th century, a few years after the , Uccle merged with neighbouring territories to become a commune, with its own and municipal assembly. It had to wait until 1828, however, for the Dutch authorities to allow the construction of the first city hall. This was a time of economic prosperity and growth, stimulated by the proximity to the two main roads linking Brussels to the industrial south. A newer and larger city hall was built between 1872 and 1882. Banker and philanthropist Georges Brugmann contributed a lot to the urbanization of the city just before the turn of the century. In the early 20th century Michel van Gelder breed a new breed of chicken, the , named after the town. Despite the accelerated rate of construction that took place in the early 20th century, Uccle succeeded in keeping several of its green areas intact, which now attract many of the Brussels area’s wealthier inhabitants.

*Uccle is mainly a residential area, but counts a lot of parks and forested areas, such as the Park of Wolvendael and the Verrewinkel woods. The municipality is also situated to the immediate West of the famous "" ( _nl. Ter Kamerenbos).
*The Saint-Job square and the area near the Saint-Peter church and city hall are two older parts of town, now filled with a happy mix of stores and pubs.
*Uccle is the site of the Belgian national , the : any information on Belgian weather, unless region specific, is described by the statistics recorded in Uccle. Right next door is the .
*The Uccle cemetery, also known as the Dieweg cemetery, was created following a epidemics that afflicted Brussels in 1866. Its mixture of trees and old stones exudes a unique romantic atmosphere.
*The "Bloemenwerf", a turn-of-the-century Villa built by Architect

* [http://www.uccle.be/ Official website of the municipality of Uccle] (in French or Dutch only)