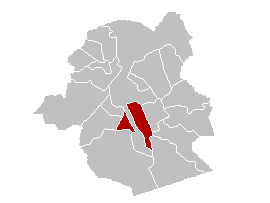 Elsene (Dutch) or Ixelles (French) is one of the nineteen municipalities located in the of .

Ixelles or Elsene is located in the south of and is divided into two parts by the , which is part of the municipality. The smaller west part of the municipality includes Bailli Street (French: "Rue du Bailli", Dutch: "Baljuwstraat") and extends roughly from the Avenue Louise to the Avenue Brugmann (French: "Avenue Brugmann", Dutch: "Brugmannlaan").

The larger east part of the municipality includes the sites of the and the , and the Eugène Flagey square.

The construction of Avenue Louise/Louizalaan was commissioned in 1847 as a monumental avenue bordered by chestnut trees that would allow easy access to the popular recreational area of the Bois de la Cambre/Ter Kamerenbos. It was also to be the first Haussmann-esque artery of the city of Brussels. However, fierce resistance to the project was put up by the town of Ixelles (which was then still separate from Brussels) through whose land the avenue was supposed to run. After years of fruitless negotiations, Brussels finally annexed the narrow band of land needed for the avenue plus the itself in 1864. That decision accounts for the unusual shape of today's and for Ixelles being split in two separate parts.

The (French) or (Dutch) is located just south of Ixelles.

Ixelles is known throughout Belgium for its high population of people of African origins. This population is mainly concentrated in the environs of Porte de Namur intersection, renamed popularly as "Matongé" or "Matongué" after the marketplace and the commercial district with the same name in Kalamu, . The core of Matongé was formed in late 1950s by the foundation of "Maisaf" ("Maison Africaine", "African House") which served as a centre for university students from the . After the independence of Congo, the district faced an influx of immigrants from Congo who shaped the neighbourhood in a style to resemble the original Matongé. There are also communities from other African countries like , , , , and present in the district. The famous shopping arcade Galerie d'Ixelles is located in the heart of Matongé.

The district also attained notoriety from early 2000s with perpetrated by African s like "Black Démolition". It was the scene of in January 2001. Matongé, with its more recent immigrant communities from , , and along with African ones, is seen as a symbol of in Belgium.

The origins of the village of Ixelles date from the foundation of the "" ( _nl. Abdij ter Kameren) by a nun in 1196. The abbey was located near the springs of the Maelbeek in the , the remnant of which closest to Brussels became known as "" ("Ter Kamerenbos"). The abbey was consecrated by the soon after its foundation. and were two of its most famous residents in the 13th century.

Around 1300, during the reign of , a hostel was built near the abbey to provide meals to the wood bearers working in the forest. Soon, a hamlet and a couple of chapels were built, including the "Church of the Holy Cross" (French: "Sainte Croix", Dutch: "Heilige Kruis"), also dedicated by the Bishop of Cambrai in 1459. The area included several ponds, still visible today, that provided fish to the abbey and to the neighbouring hamlets. At that time, part of Ixelles was a dependence of ; the other part was the property of the local lord.

In 1478, the wars between and brought devastation to the abbey and the surrounding areas. In 1585, the Spanish burnt down most of the buildings to prevent them from being used as a refuge by the calvinists. The abbey was restored in time for the of the Archdukes Albert and Isabella in 1599. Further manors and castles (Ermitage, Ten Bosch, Ixelles) were built in Ixelles in the 16th century, gradually transforming the hamlet into a full-fledged village. The purity of the pond water attracted breweries to the area, some of which survived well into the 20th century.

A municipality of its own

In 1795, like many of the other towns surrounding Brussels, Ixelles was proclaimed a of its own by the French regime after the Revolution. The abbey was stripped of its religious functions, becoming among others a cotton-manufacturing plant, a farm, a military school, and a hospital. Many of the medieval gates of Brussels that lined what is now the inner ring road were taken down and more streets were built to accommodate the migration towards the suburbs. Ixelles' population grew nearly one-hundredfold, from 677 in 1813 to more than 58,000 in 1900.

At the end of the 19th century, some of the ponds were drained and a new Church of the Holy Cross was built. The first streetcars appeared in 1884 and the first movie theatre in 1919. Ixelles and the Avenue Louise became one of the classy areas of Brussels. Artists and celebrities moved in, leading to architectural novelties such as and .

*The buildings of the Abbey of la Cambre house a renowned school for the visual arts, the National Geographic Institute, and various parish functions.
*The and Tenbosch Park offer a welcome green spot in the middle of the city.
*The building on the used to house the studios of the Belgian radio and television broadcasting companies ( and ). The is another notable Art Deco building.
*Several houses were built by and can still be seen today.
*Two universities—the and the —have their campuses in Ixelles.
*The is one of the most important cemeteries in the country as it contains the graves of a number of famous Belgian personalities. The French General committed suicide here, on the tomb of his mistress, who had died a couple of months earlier.
*Ixelles also houses several interesting churches and museums, including a fine-arts museum and the museum, established in the residence where the artist lived part of his life.

*Several fairs are organized in Ixelles, including the Spring Fair on the , which takes place between the fourth and sixth Sunday after Easter, and the Boondael Fair at the end of July.

The following people lived part of their life in Ixelles:

* [http://www.elsene.be/ Official site of Elsene / Ixelles municipality] (only in French or Dutch)