Ottakring is the 16th District in the city of Vienna, Austria (German: 16. Bezirk, Ottakring). It is located west of the central districts, north of Penzing and south of Hernals.[2] Ottakring has some heavily populated urban areas with many residential buildings.[1][2] It was formed from the independent villages of Ottakring and Neulerchenfeld in 1892.

The district of Ottakring is embedded in the western part of Vienna between the Gürtel (a substantial road around Vienna) and the hills of the Wienerwald (Vienna forest). The district of Hernals borders to the north, Josefstadt and Neubau to the east, and Rudolfsheim-Fünfhaus and Penzing to the south. The highest points in the district are the Gallitzinberg (449 m), also known as Wilheminenberg because a palace (Schloss Wilheminenberg) is situated on its slope.

The buildings vary considerably in style. The working class settled around the industries and factories near the Gürtel, resulting in a dense checkerboard pattern of residential housing. A little further up is a collection of villas around the Ottakring cemetery surrounded by an extensive number of deciduous trees.

The district is made up of 36.7% greenery (of which 22% are forest), 45.4% buildings, and 17.9% transportation. Thaliastraße is the busiest and most commercially important street in the district. A total of 1.23% of the land area is used for agriculture. The once important vinyards have mostly disappeared. Gardens are found primarily around castle Wilhelminenberg and towards the border to Penzing. 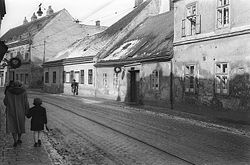 The original Ottakring was founded about 1,000 years ago by Bavarian settlers who cleared a small patch of forest on the cityward slope of the Gallitzinberg. (The exact time is not known because, as with most other places in the area, no document has survived.) It was situated where the Ottakring cemetery is today, straddling a creek (the Ottakringer Bach) which now has completely disappeared into Vienna's canalization. Originally it flowed along what today are the streets of Ottakringer Straße, Abelegasse, and Thaliastraße; through Lerchenfelderstraße and the Minoritenplatz; and into the Donaukanal, an arm of the Danube river. This "oldest Ottakring" was completely destroyed in 1683 during the Battle of Vienna. The village was rebuilt further downstream on the Ottakringer Bach, closer to Vienna. This nucleus, parts of which survived into the 1980s, was what became known as Alt-Ottakring in the 19th and 20th century. 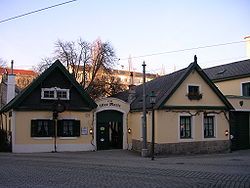 In 1888, emperor Franz Joseph I declared that he wanted to unite Vienna with the surrounding villages. The Lower Austrian government passed a law Eingemeindung der Vororten zu Wien (village annexation to Vienna) in 1890. On January 1, 1892, the resolution took effect. Despite initial resistance, the independent villages of Ottakring and Neulerchenfeld were merged into the 16th district of Vienna. It had 106,861 residents.

After the absorption into Vienna the area experienced rapid growth. By 1910, 177,687 people lived in Ottakring. Though the number of employment opportunities was limited, the number of workers was extremely high. This encouraged industries to move to the area.

The World Wars and their aftermath

After World War I, residential construction boomed. Between 1922 and 1934, 28 Gemeindebauanlagen (community housing projects) with more than 4,517 apartments were constructed. Among this number were the 1,587 large communal (condominiums), the first in Vienna. The economic collapse of the 1930s brought great adversity to the district with unemployment surging to over 50%. The brief Austrian Civil War of 1934 brought major instability and fighting to the region. The local insurgency overpowered the army of the original social democratic party, and the residential buildings escaped mostly unharmed. There was however heavy fighting around the workers' housing in the street Kreitnergasse.

During World War II, air defence of Vienna and some southeastern parts of the Third Reich territory were coordinated from the Gaugefechtsstand Wien, situated at the Gallitzinberg.

After the war, Ottakring belonged to the French-occupied zone of Vienna (which was divided into quarters and split among the Allies). The efforts to rebuild the area were slow at first and eventually even the oldest parts of the district were finally renovated. The French replaced the Negerdörfel barracks and construction continued. 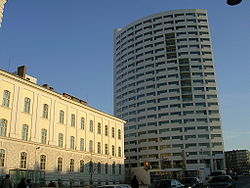 The Schwesternturm at the U3 subway terminal

When the subway line U3 was extended into Ottakring in 1998, the district area around the new end station was revitalised. The building opposite the above-street-level end station earned the name Schwesternturm (literally Sisters Tower, but originates from the German Krankenschwester, nurse) due to the secondary use of this residential building as a lodging for nurses. The empty factories of an old tobacco company and the long-unused stores beneath the arches for the Schnellbahn (fast local trains) were converted into a tech school (HTL, see de:HTL in German). The centre of Vienna can be reached in 13 minutes via the subway.

According to Statistics Austria, the current population growth in Ottakring is almost exclusively driven by migration from beyond Austria's borders. Of the 93,000 people estimated to live in Ottakring in 2007, 26 percent do not hold Austrian citizenship, and significant parts of this demographic stratum are poorly integrated. Approximately 12,000 residents originate from former Yugoslavia, and more than 4,000 from Turkey. They tend to concentrate in the old, densely populated, and sometimes desolate inner-city parts of the district, while the western parts of Ottakring are suburban in character, almost exclusively Austrian, and relatively affluent. Vienna's demographic statisticians predict an exacerbation of this division, making ghettoization an increasing concern.

The directorship was elected by a common vote until 1918. After that, the social democrats designated the district as a worker's district. On May 4, 1919, the social democrats gained the great majority of the vote and voted the railroader Johann Politzer to be District Director. He held the position until 1934, when the Patriotic Front party took power in Austria. After the fall of the Nazis in November 1945, the people were able to freely vote for the first time in 10 years. Of the 30 government positions, the SPÖ won 20 seats, ÖVP won 8, and KPÖ won 2. The SPÖ held their dominance for decades, until the start of the 1990s. In 1996, the FPÖ gained a lot of popularity at the expense of the SPÖ, with the SPÖ falling from 50.54% to 40.58%, and the FPÖ gaining 30.59%. The trend reversed itself in 2001, when the SPÖ rose back up to 49.45% and the FPÖ fell down to 20.86%. The Greens took 12.54% in 2001, putting them at almost the same level as the ÖVP, which took 13.13%. The Liberal Forum lost almost half of their support and with 2.47% took only one seat representation.

The left half of the coat of arms stands for the once-independent town of Ottakring. The 3 green hills symbolise the three important features of Ottakring: Jubiläumswarte, Gallitzinberg and Predigtstuhl. The cross-shield and mitre hat stand for the former monastery in Klosterneuburg.

The right half of the coat of arms illustrates where the name of "Neulerchenfeld" originated. A larch tree (German: Lärche) with circling larks (German: Lerche) sits in a field (German: Feld), giving the name Neulerchenfeld ("new-larks-field").

Industries settled quickly in the district after it was united into Vienna. In 1898, for example, the tobacco factory opened in Thaliastraße. Photo industry (eg, Herlango) and machinery factories (e.g., Österreichische Industriewerke Warchalowski, Eißler & Co. AG) were notable new companies to settle in Ottakring. The largest employer was the textile industry. Following World War II, many of the industries were outsourced to other areas, which created a marked difference between the living areas and the abandoned factories. The most well-known services still operating in Ottakring are the Ottakring Brewery and the coffee roaster Julius Meinl.

[Parts of this article were translated from German Wikipedia.]