/ˈhʌntɪŋdənʃər/ or /ˈhʌntɪŋdənʃɪər/; abbreviated Hunts) is a local government district of Cambridgeshire, covering the area around Huntingdon. Traditionally it is a county in its own right. It includes St Ives, Godmanchester, St Neots, and Ramsey.

The area corresponding to modern Huntingdonshire was first delimited in Saxon times, and the modern boundaries have remained largely unchanged since the 10th century. 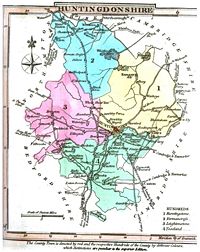 In 1965, under a recommendation of the Local Government Commission for England, it was merged with the Soke of Peterborough to form Huntingdon and Peterborough - the Lieutenancy county was also merged. Also at this time St Neots expanded westward over the river into Eaton Ford and Eaton Socon in Bedfordshire.

In 1974, under the Local Government Act 1972, Huntingdon and Peterborough merged with Cambridgeshire and Isle of Ely to form the new non-metropolitan county of Cambridgeshire. A Huntingdon district was created based closely on the former administrative county borders, with the exclusion of the Old Fletton urban district became part of the Peterborough district, as did that part of Norman Cross Rural District in Peterborough New Town.

The district was renamed Huntingdonshire on 1 October 1984, by resolution of the district council.[1]

Original historical documents relating to Huntingdonshire are held by Cambridgeshire Archives and Local Studies at the County Record Office in Huntingdon.

The Local Government Commission considered in the 1990s the case for making a Huntingdonshire unitary authority as part of a general structural review of English local government, that led to unitary authorities in two other English counties that had been wiped from the map: Rutland and Herefordshire.

David McKie writing in the Guardian noted that "Writers-in demanded an independent Huntingdon; but MORI's more broadly-based poll showed that most Huntingdonians - that is, most of John Major's electors - were content to stay part of Cambridgeshire."[6]

Huntingdonshire is the birthplace of bandy, now an IOC accepted sport.[9] According to documents from 1813, Bury Fen Bandy Club was undefeated for 100 years. A member of the club, Charles Tebbutt, wrote down the 1st official rules in 1882 and helped spread the popularity of the sport to many countries.[10] Huntingdonshire County Cricket Club is considered one of the 20 Minor counties of English and Welsh cricket, even though it has never played within the Minor Counties Championship it has its own individual Cricket Board and played in the English domestic one-day competition, between the years 1999 and 2003.