Moulay Ismaïl Ibn Sharif (1634? or 1645?-1727, reigned 1672–1727)[1] (Arabic: مولاي إسماعيل بن الشريف ابن النصر‎) was the second ruler of the Moroccan Alaouite dynasty. Like others of the dynasty, Ismaïl claimed to be a descendant of Muhammad through his roots to Hassan ibn Ali. He is also known in his native country as the "Warrior King."

He ruled from 1672 to 1727 succeeding his half-brother Moulay Al-Rashid who died after a fall from his horse. The then twenty-six year old Moulay Ismaïl inherited a country weakened by internal tribal wars and royal successions. The Alaouite sultan is said to have fathered more than a thousand children. A total of 867 children, including 525 sons and 342 daughters, was noted by 1703 and his 700th son was born in 1721.[2] Meknes, the capital city he built, is sometimes called the "Versailles of Morocco", because of its extravagance. Some of the stones were plundered from the ancient Roman ruins at Volubilis.[3]

He has also been given the epithet "The bloodthirsty"[2] for his legendary cruelty. In order to intimidate rivals, Ismail ordered that his city walls be adorned with 10,000 heads of slain enemies. Legends of the ease in which Ismail could behead or torture laborers or servants he thought to be lazy are numerous. Within the 20 years of Ismail's rule, it is estimated 30,000 people died.[4] 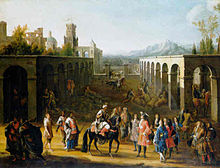 During Moulay Ismaïl's reign, Morocco's capital city was moved from Fez to Meknes. Like his contemporary King Louis XIV of France, Moulay Ismail began construction of an elaborate imperial palace and other monuments.

In 1682 he sent Mohammed Tenim as an ambassador to Louis XIV, and he even made an offer of marriage to Louis XIV's beautiful legitimised daughter Marie Anne de Bourbon. Marie Anne refused. 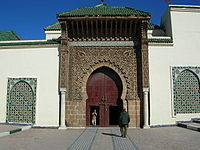 Mausoleum of Mouley Ismaïl in Meknes.

Moulay Ismaïl is noted as one of the greatest figures in Moroccan history. He fought the Ottoman Turks in 1679, 1682 and 1695/96. After these battles the Moroccan independence was respected. Another problem was the European occupation of several seaports: in 1681 he retook al-Mamurah (La Mamora) from the Spanish, in 1684 Tangier from the English, and in 1689 Larache also from the Spanish. Moulay Ismaïl had excellent relations with Louis XIV of France, the enemy of Spain, to whom he sent ambassador Mohammad Temim in 1682. There was cooperation in several fields. French officers trained the Moroccan army and advised the Moroccans in the building of public works. 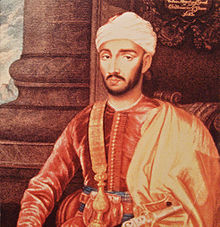 Moulay Ismaïl is also known as a fearsome ruler and used at least 25,000 slaves for the construction of his capital.[6] His Christian slaves were often used as bargaining counters with the European powers, selling them back their captured subjects for inflated sums or for rich gifts. Most of his slaves were obtained by Barbary pirates in raids on Western Europe.[7] Over 150,000 men from sub-Saharan Africa served in his elite Black Guard.[8] By the time of Ismail's death, the guard had grown tenfold, the largest in Moroccan history. 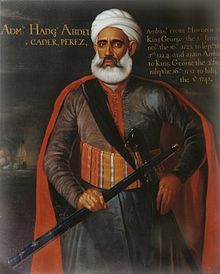 Ambassador Admiral Abdelkader Perez was sent by Ismail Ibn Sharif to England in 1723.

Moulay Ismaïl is alleged to have fathered 889 children. This is widely considered the record number of offspring for any man throughout history that can be verified. It is thought that Ismaïl would have had to copulate with an average of 4.8 women per day for 40 years to achieve that number of children.[9]

After Moulay Ismaïl's death at the age of eighty (or around ninety by the 1634 birthdate) in 1727, there was another succession battle between his surviving sons. His successors continued with his building program, but in 1755 the huge palace compound at Meknes was severely damaged by an earthquake. By 1757 his grandson, Mohammad III moved the capital to Marrakech.