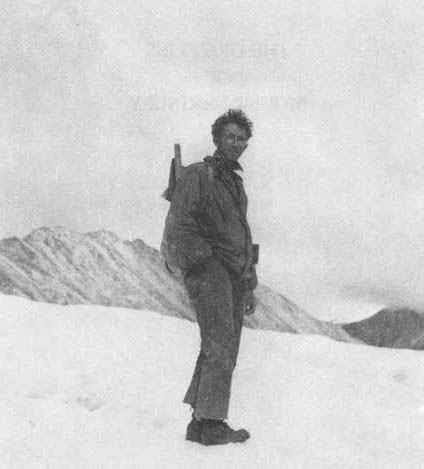 Adolph Murie (1899-1974), the first scientist to study wolves in their natural habitat, [ [http://www.wolf.org/wolves/news/iwmag/2002/summer/research.pdf] "A Brief History of Wolf Research, " Steve Grooms, International Wolf, Summer, 2002, Volume 21, No. 2, p. 9 ] was a naturalist, author, and wildlife biologist who pioneered field research on wolves, bears, and other mammals and birds in Artic and sub-Arctic Alaska. He was also instrumental in protecting wolves from eradication and in preserving the biological integrity of the and the . , [ [http://www.wilderness.net/library/documents/IJWAug05_nixon.pdf] "Science and Learning in the Alaskan Wilderness," Ingrid Nixon, International Journal of Wilderness August, 2005, Volume 11, No. 2, p. 35 ]

Adolf Winstrom was born on , , in , the child of Ed and Marie Winstrom. [Joachim Murie, father of Olaus and Martin, died in 1895. His widow, Marie, married a Swedish-American, Ed Winstrom. Marie gave birth to Adolf in 1899 and Winstrom died shortly thereafter. Probably to avoid confusion for her children, Marie resumed her first husband's name. Adolf preferred Murie to Winstrom and later formally changed his name. He also later changed the spelling of his first name to Adolph. Footnote 6, "A Wilderness Apprenticeship", John Little, Environmental History, October 2000 issue, p. 12, available online at [http://findarticles.com/p/articles/mi_qa3854/is_200010/ai_n8926451/pg_12 ] ] In 1922, prior to completing college, Adolph Murie joined his brother, , on an expedition to Mt. McKinley National Park, the first of many trips he would make to Alaska to do biological research. Murie received a Bachelor’s Degree from Concordia College, and attended graduate school at the , where he earned his in 1929. [ [http://www.nps.gov/nhl/designations/samples/wy/MurieRanch.pdf] "Murie Ranch Historic District," National Register of Historic Places Registration, U. S. Dept. of the Interior, National Park Service, p. 27] He subsequently worked on projects for the university’s Zoology Museum, among other things doing research on mammals in Guatemala and British Honduras. [ [http://deepblue.lib.umich.edu/bitstream/2027.42/56271/1/MP026.pdf] "Miscellaneous Publications of the Museum of Zoology, No. 26", University of Michigan, July 15, 1935]

In 1934, Adolph Murie went to work for the Wildlife Division of the National Park Service. In 1937, Murie conducted a study of coyotes in Yellowstone National Park, published as "Ecology of the Coyote in Yellowstone." This book set off a storm of controversy within the Service, and represents one of the first studies published that argued against the Service’s long tradition of predator eradication. In 1939, the National Park Service assigned Murie to assess the relationship between the and the in the Mt. McKinley area. The resulting book, "The Wolves of Mt. McKinley", is considered a classic, especially given the detailed field observations which Murie spent hours collecting from 1939-1941. The publication of these two works led directly to the termination of the predator eradication programs in Yellowstone and Mt. McKinley national parks. [ [http://www.nps.gov/nhl/designations/samples/wy/MurieRanch.pdf] "Murie Ranch Historic District," National Register of Historic Places Registration, U. S. Dept. of the Interior, National Park Service, p. 30-31]

=Service, research and wildlife organizations= Along with his brother, Olaus, Murie helped to enlarge existing national park boundaries and to create additional new units, notably the in 1943 (it was upgraded to national park status several years later, then incorporated into the ).

In addition to his books, Murie published numerous articles against predator control programs and excessive human intrusion on wilderness areas. He wrote letters and submitted testimony to Congress regarding , Jackson Hole, Mt. McKinley, and other wilderness areas threatened by development or predator control programs, including an article against pesticide use in in 1966.

Adolph Murie died on , at his STS Ranch, now part of the in . The ranch was designated a in 2006, and the house and grounds are the headquarters for the Murie Foundation, a non-profit organization dedicated to conservation work. [ [http://www.muriecenter.org] Murie Center web site]

The Murie Science and Learning Center in was opened and officially dedicated to Murie on August 16, 2004. The Center also serves as the visitor’s center for the park in the winter. [ [http://www.nps.gov/dena/parkmgmt/upload/TheSuperintendentReport2004.pdf] Superintendent’s Report, Denali National Park Preserve, Fiscal Year 2004, p. 3]